Getting in the Purim Mood 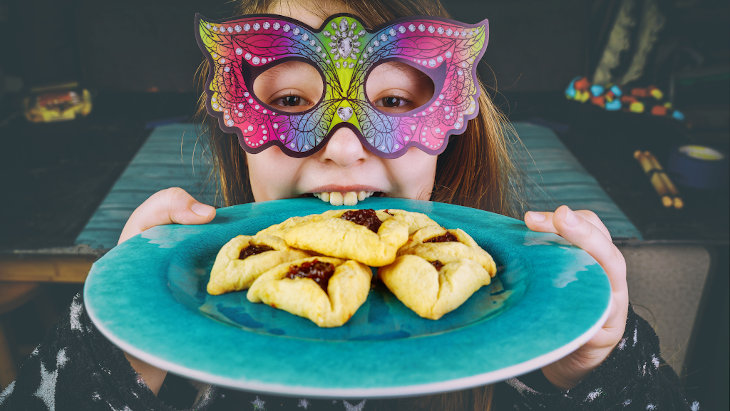 For a few reasons, it's been rather hard this year.

We have just entered the Jewish month of Adar, the month of the holiday of Purim, the month that brings with it additional joy – and I found my sense of celebration sorely lacking.

It wasn’t just that I reflected on last Purim and realized that it was probably the super spreader that lead to a lot of illness and death. It wasn’t just that it sort of marked the boundary between our before-corona world and our after-corona one; I think there is a non-Covid-related factor as well.

When I teach some of my students about Shabbos (or other holidays), they frequently respond, “I wish I’d known you 20 years ago; my kids are all grown up now; it’s too late.” To which I reply that the holidays are not just for children and that they should be celebrated even in a home of empty nesters and even if alone (two facts that have certainly been highlighted during this pandemic). The meaning of Shabbos and all of our holidays is deep and connects us to God and is not dependent on having small children in the home.

But I think that these words, while true, fell too glibly from my tongue. While accurate, they are yet another example of easier said than done, a fact that was brought home to me this past Rosh Chodesh Adar.

Instead of making hamantashen and planning costumes, my husband and I were looking at each other: “Is today Rosh Chodesh? Is it two days?” We weren’t as tuned in to it; we weren’t in the same celebratory mood. While our family chat was abuzz with ideas for mishloach manot (baskets of food to send to friends), I hadn’t even given the idea a second thought.

Yes, I could make excuses. Some of them might even be legitimate! We just moved (how long can I use that one for?) and my life is consumed with unpacking (a problem in and of itself), my husband doesn’t go to shul (back to COVID) so isn’t as attuned to the holidays, I’m paralyzed by the age-old dilemma of which filling to put in my hamentashen (prune, poppy or chocolate?!) so I end up making nothing…but they are all just that, excuses.

The bottom line is that, while it is absolutely true that the holidays are just as significant, just as meaningful, just as important whether we have small children in the house or not, they are not just as easy.

I don’t mean physical effort – that’s obviously more difficult with a bunch of small and not-so-small children about. I mean the emotional and spiritual effort. I mean the focus. For my daughters who are young mothers, Purim has been on their mind for weeks – planning and ordering or making costumes, making Purim treats for their many mishloach manos, figuring out where to have the Purim meal… it’s been all-consuming.

For me, it’s been the opposite. I’ve basically ignored those conversations, ignored the whole idea until all of the sudden Adar was upon me and I had definitely not worked on increasing my joy! And I felt the poorer for it. I had fallen into the same trap I warned others to avoid. Without the pressure (pestering, nagging) of young children, I had made no preparations for Purim. I have not given the holiday its due. And I’m not proud of that.

Especially when I always say that Esther, the heroine of the Purim story (and I like to think of as my namesake since my actual Hebrew name is Esther Emuna – little known fun fact) is my favorite character in Jewish history.

The good news is, like with everything else, it’s never too late to change. It’s not too late to re-orient my focus, to bake some hamantashen, to plan a costume, to make some nice mishloach manos (even if I don’t know anyone here yet) and to sit down with Megillat Esther and remind myself why the Purim story is so important – and why it’s not just for children!