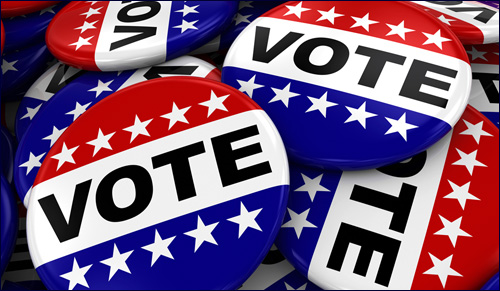 There are benefits to voting that I bet you didn’t even consider.

Over the past few months, I’ve gotten a lot of requests from readers to write about the upcoming historic election. As of now, I don’t have an opinion, because I’ve been trying to ignore it.

But a lot of people are wondering if they should even bother voting. Yes, we live in this wonderful country where our opinion matters, but it kind of feels like when you want your children to feel like they have some control, so you give them a minor choice of two options that are acceptable to you, like, “You can either brush your teeth before you get in pajamas or afterward.” Or when you go to a wedding, and the waiter goes, “Would you like the fish or the chicken?” And everyone picks one without wondering why they’re not being offered more of those awesome spare ribs from the shmorg.

On the other hand, there’s always a third option. Take the recent story about a 68-year-old woman in Virginia who died and left the following obituary:

“Faced with the prospect of voting for either Donald Trump or Hillary Clinton, Mary Anne Noland of Richmond chose, instead, to pass on.”

In other words, you don’t have to have the fish or the chicken. You can always pass out on the dance floor and end up eating hospital foods.

So a lot of people are kind of saying – along the same lines – that maybe we don’t have to pick either candidate. This is what our forefathers fought and died for? The right for someone to die so she doesn’t have to vote? Maybe we should all go back to Britain, right?

Wrong. Take the recent news story about the new polar research ship that the British government is putting together to monitor climate change. This ship will be the largest and most advanced British research vessel to date. And in order to promote interest, Britain’s Natural Environmental Research Council (NERC) asked the public to help name the ship. People were urged to find an inspirational name that reflected the ship’s mission while also celebrating Britain’s long naval history. So the name they came up with was: Boaty McBoatface. Which – I don’t know – sounds like a really ugly Scottish guy who won’t stop talking about boats.

So how did that work? Did lots of people come up with that name independently? Was it named after the famous explorer Sir Robert McBoatface?

Okay, so that wasn’t the only name suggested. But it did beat the 2nd place suggestion by 400%. (The second place winner got 34,000 votes, while McBoatface got 124,000. And one old woman chose to die rather than vote on the name.)

So the NERC went into full panic mode. They spent two months having several emergency meetings as to what to do about the situation, until they finally decided that this is not the right name for a ship like this, because we are not living in a cartoon. According to Britain’s Science Minister and Professional Killjoy Jo Johnson, “We actually thought the public would come up with a respectable name after someone who is British and white. And preferably deceased.”

I might be paraphrasing. These NERCS put me to sleep.

Of course, there’s no way they were going to go for this name. This is an organization that named themselves the National Environmental Research Council (NERC) instead of Department or Division. Was that a missed opportunity, or what?

So in the end, they’re naming the ship the RSS Sir David Attenborough, after a 90-year-old explorer and broadcaster who’s still alive. How is that fair? Also, what are people going to do when they’re both in the room? How will anyone know which one they’re calling?

Attenborough’s name actually came in 5th place, with a vote of 10,284. The 4th place vote – this is true – was the RRS It’s Bloody Cold Here.

But they were kind of justified. The “Sir David Attenborough” sounds like a powerful, impressive ship that will knock icebergs out of the way without flinching. “Boaty Mcboatface” sounds like it might get eaten by a polar bear.

Also, the reason boats have names in the first place is so they can identify themselves when they get into trouble. What other reason would there be for a boat to have a name? It’s not like you go, “Here, Boaty!” and it comes. When do you have to call a boat?

But imagine the ship were to get into trouble at some point in the future. Imagine the headlines. In a British Accent.

But good reason or not, can they actually do that? Can they just take the public vote and overturn it?

So now the British are all upset, and they’re saying that democracy is dead. I guess my point is thank goodness we got out of that country when we did. After all, we’re living in a wonderful country where we get to put everything to a vote too. For example, we recently had a vote as to which important historical figure to put on the $20 bill. Sure, there already IS an important historical figure on the $20 bill – Jackson or Hamilton or something – but people wanted someone who would represent women and minorities. And the winner was: Boaty McBoatface.

Okay, so it wasn’t. Point is, though, that the power of voting can do amazing things, such as change the pictures on currency for no real reason. Who cares whose picture it is? Does every, um, denomination have to be represented on money? (Oy.) Why not put a Jew on one of the bills? That would be great for stereotypes. And as far as I know, there’s no Jewish money right now, besides Fiveish.

Also, there are benefits to voting to that you didn’t even consider. Take what happened the last time I went to vote. It was right before Pesach, and my wife said, “You go vote, and I’ll meet you next door at the Man with the Truck,” so I went.

And no, I’m not going to tell you who I voted for. Mostly because I don’t know. I think it was school board members. I wasn’t thinking about it. I was just trying to get in and out and over to the Man with the Truck, where my wife and kids were fighting over yarmulke sizes.

So I came out of the building and this photographer chased me up the block. And he asked, “Did you just vote in there?” And I said, “Yes,” expecting him to ask if he could take my picture. Not that my particular vote was so historic. And he said, “Good!” and walked away.

It’s nice to be appreciated. You think your vote doesn’t count, but apparently, it’s making someone happy.

Anyway, the next day a friend told me, “Hey, your picture’s in the paper!” So I looked, and sure enough, there’s a picture of me leaving the building, looking down, thinking about the Man in the Truck. And underneath it was a caption, “Faced with the prospect of voting for either Donald Trump or Hillary Clinton…”

Okay, so what the caption actually said was, “An unidentified man leaves the polling location at Franklin school No. 3 in Passaic.”

He really could have asked for my name. Or at least just written “a man”. “Unidentified man” sounds like I’m a body they found that they haven’t identified yet. Or I’m some kind of criminal. (“Unidentified man seen leaving the bank with cloth reusable bag with enormous dollar sign on it.”) They make it sound like they tried to find out who I was, but I just kept running to my getaway vehicle. Or my lawyer shoved the cameraman and was all like, “No comment!”

My point is that you should vote. Maybe you’ll get your picture in the paper! Anonymously!

Maybe they should have a vote contest of what to call me.

How to Enjoy a Summer Vacation in Israel