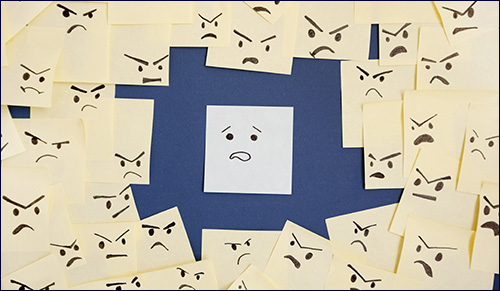 As a counselor as well as humorist, I can tell you that “guilt” is not only part of the human condition but can also be highly under-rated. Imagine a world without guilt. The master liars, thieves, greedy people and no-goodniks would run things! Oy …. wait. Anyway, moving on: Without guilt, would our Barbra have had a hit with “People”?

Agreed, we Jews don’t have a monopoly on guilt (as we discussed in our first installment here), although given our different histories we may not express it the same way or over the same things. As a Jewish reporter, it’s my job to report. To insure accuracy I worked with a brilliant mentoree, Robyn, who while she knows the meaning of yutz, is a major Gentile from Ohio. So fasten those seatbelts (and make sure they’re not too tight or you could cause a hernia and I’ll never forgive myself).

Disclaimer: For any of you who would use the odious word “stereotype,” I promise I’m an equal opportunity “stereotyper.”

Jews are on it. If our new toaster spits out stuff, the two-ply toilet tissue is missing a ply, or say, there are only five gefiltes in the jar instead of six, we’re on the job. This is not only to avoid guilt by restoring fairness to the world, but to avoid being guilted by our mate who might say: “This you bought and didn’t test in the store?!”

Personally, I have put more managers in “Customer Service Seminars” than Alan Dershowitz. Do I feel guilty? No. I’ve done my American duty, even if it takes flying to HQs to get, say, my coupon that arrived late.

Gentiles don’t want to make a fuss. God forbid they should annoy another person; they not only feel guilty, but ashamed of themselves. For example, a Gentile finds her new spatula is broken. You’ll hear: “Look, it happens. Nothing’s perfect. How big a deal would it be to fix it? Jimmy, I’ll get the duct tape and bring me the gorilla glue.” Should they try to bring it back to the store – in pieces – many actually take a “No. It was fine when it was here!” and leave feeling remorseful, wondering if maybe the frosting they spread was too dry.

Few Jews know this concept. Should a lamp go out, a hinge rot, an “on” switch poop out, a drop of rain falls on us (God forbid) while we’re in bed, members of the same MOT's who won 25% of the Nobel Prizes will stare in mute horror. “Morris, the oven light is out! Do something!” Now, should Morris try to fool with plugs and wires, not only will he feel guilty (he’s an accountant, not an electrician), he’ll cause great grief when he blows up the microwave. A savvy Jew will call his Gentile neighbor.

Do-It-Yourselfers: Gentiles like to fix; Jews not so much.

Gentiles are fixers. All those people looking through peepholes on construction sites? Gentiles. Tools and fixing to many Gentiles means independence and financial responsibility. “Johnny dear, there’s a little fire in the den, and while you’re at it, the ceiling is curving.” Should a male Gentile not be a Bob Vila, he feels he must do penance. Especially if calling a plumber, electrician or carpenter costs 50 dollars a visit.

Moreover, if he doesn’t know, he’ll research – for days, weeks, months. Not only will he call every Gentile he knows, but he’ll do a search that rivals the FBI’s Behavior Analysis Unit to find the evil culprit. The guilt of “not knowing when you own it” may even drive some to build massive machinery to unstop the toilet.

And while we’re on the subject …

Jews: Of course many Jews have trendy digital thingies, cables, wires, and communication/computer services. Ah, but should something go wrong? Personally, my entire strategy to correct a device-gone-wonky is called “Shrieking.” Jews like me hope we can guilt the thing into apologizing and working.

If it doesn’t cooperate, I will drip with guilt over not having “tech support’s” number, which I can’t get because it’s in my computer which won’t turn on. I call my son who is thrilled to hear about yet another mechanical disaster, and tells me to call “tech support.” (He will, however, supply a number.) After pressing no less than 199 keys, with an automated voice asking me questions - which, if I knew the answer I wouldn’t be calling - I wait an hour for the right “tech support” guy. Hysterical I say: “MY COMPUTER WON’T TURN ON.” His first question? “Madam, calm down. First… is it plugged in?” We move on.

Gentiles: Many Gentiles I know would rather fitz (futz to fix) with wires and even take apart AOL, never mind their computer. If it explodes, a Gentile would rather try to put together the 5,000 pieces than, God forbid call “tech support” and admit defeat. Why pay the extra 10 dollars a month when a real man should know how to make things fit – even if takes three hours re-tooling a stripped wire that came from an old Zenith radio.

ADULTHOOD: OURS AND “THEIRS”

Jews feel our job as parents aren’t completed until after death. While a child may leave for college, we feel guilty if we refuse to let our child, a Harvard graduate who majored in finance, move back in at age 40 “to find himself.” This, of course, also includes his wife. Failure to do so will lead to serious lamentation on the part of parents, even if we have to turn in our IRAs to build a new small wing. Naturally, this congenital guilt will insure we have a place to stay in our old age – in that wing.

Gentiles believe throwing their progeny out of the nest by age 18 leads to independence. If a child needs tuition, hey… get a loan. It builds character. If they get a call that s/he is on a deserted highway and needs bus fare? “If you look, you’ll find an odd job.”

Should a child still be living in the house by 21, the Gentile parent feels remorse over bad-parenting, but more, as this guilt is also congenital, they must save enough for a monthly RV rental – or maybe face a long-term facility named “Shady Oaks.”

Jews often don’t feel so well, so we MOT's know not to ask, “Morty, how are you?” We’ll not only get an answer, but x-ray viewings may be involved. Given our centuries of strife, the question: “Listen, what’s the worst thing that can happen?” does not involve winning the lottery. So we Jews are “PAP” (Pro-active Preventive). Should little David sneeze, it could be nasal polyps which, if not checked, could become something requiring major surgery and life-long ultrasounds. True, we know it’s probably a sneeze – but if not? Oy the guilt, which is why we have the doctor on speed dial and send him image updates of David’s nose.

Gentiles don’t get sick. Actually, they do, but to admit it to a relative, a neighbor, or the mail person is a sign of weakness, which is a massive source of self-reproach. Don’t believe me? Watch old medical shows like “House.” Ninety percent are finally shlepped in by ambulance when the police see two people in a coma lying on the street glowing silver. True story in Nevada: A couple were brought into the ER because they thought “silver” was healthy – so they collected and ate nuggets. What? They didn’t notice a developing after-glow for three months? Blue urine? Or that they were talking backwards? Their nearest neighbor said, they all agreed it was from the time a tractor fell on them, and they took stuff from their herbal patch to stop the bleeding.

Robyn Morin, is a writer, editor, puppeteer and magician, who has written poetry and scripts for Combined Efforts, a small film company in Ohio. She is presently working on several scripts and a graphic novel with Marie Winston-Macauley. Miss Morin comes from a creative family that includes producers, writers, directors and actors.

The Immigrant
Why Are The Prayers Of Yom Kipur So Repetetive?
Ha'azinu 5783: A Time for Unity!
Twisted Thinking
Comments