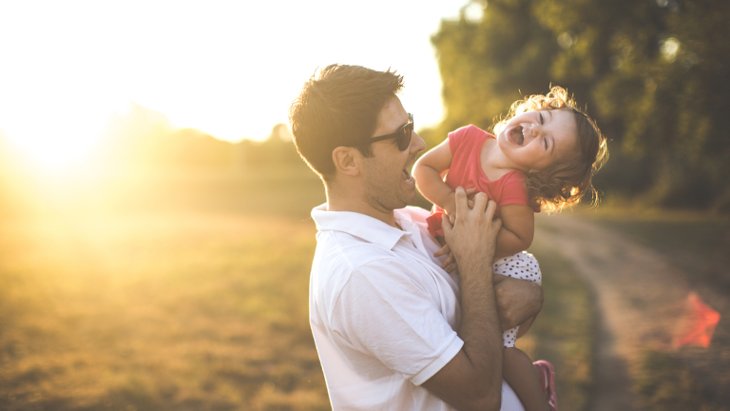 In honor of Father’s Day, here are the funniest Jewish jokes about our beloved dads.

In honor of father’s day here are the funniest Jewish jokes about our beloved dads:

’TIS THE SEASON: IT’S ONLY BUSINESS

To paraphrase Jackie Mason, every Jew knows a building he could have bought 20 years ago for nine dollars. My own father, may he rest in peace, used to count Polaroid stock splitting – that he didn’t buy. True or stereotype, Jews enjoy joking about business as much as doing it.

The lifeguard swam to his rescue and shlepped him to shallow water. “Mister, can you float alone?!” he asked.

“Boychick,” gasped Solomon, “you picked some time to talk business!”

My father never lived to see his dream come true of an all Yiddish speaking Canada. - David Steinberg

Levine was dying, and his sorrowing family was gathered around his bed. Eyes closed, he murmured weakly, "Are you there, Becky?"

One by one, Levine went through the list of his children down to the youngest, and each assured him of his or her presence. Levine's eyes opened wide, he raised himself to his elbows and cried out,

"So who's minding the store?"

Schwartz went to meet his new son-in-law-to-be, Sol, who was very religious.

“I study Torah,” he replied.

“Admirable, but how are you going to house and feed my daughter?”

“No problem. I study Torah and it says God will provide.”

“But you’ll have children. How will you clothe them?”

“Not a problem. God will provide.”

Schwartz returned home to his wife who anxiously asked what Sol is like.

“Well,” said Schwartz, “He’s a lovely boy. I only just met him, and he already thinks I’m God.”

“Exactly four Shema Yisraels.*” -- Marvin Silbermintz, gag writer for Jay Leno, who, in Northridge, California, was at the epicenter of the earthquake in 1993, responding to his father’s question: “How long did the earthquake last?”

“So my college boy, exactly what did Einstein do that was so smart?” asked his papa.

“He revolutionized physics! He proved matter is energy! That when light goes past the Sun, it bends. That – ”

“Awright, awright!” said the old man. “But from this he made a living?”

JEWISH PAPA: OUT OF THIS WORLD!

A Martian landed in Beverly Hills on the lawn of Mr. Pushnik.

“Take me to your leader,” said the dripping green hulk with the six eyes.

BUT ON THE OTHER HAND

Mr. Fliegel and his daughter Rebecca were discussing some of her choices in men. Papa didn’t entirely approve. Trying to break through to him Rebecca asked, "Papa, would you prefer to have the son-in-law of your dreams with me miserable, or let me choose the man of my dreams and you learn to love him?

Fliegel pondered for a minute and replied: "I'd rather have the son-in-law of my dreams and you learn to love him!"

During cheder, Marvin, the history teacher, asked young Benjamin Solomon, "Who blew down the walls of Jericho?"

"Mr. Solomon, during history I asked Benjy who blew down the walls of Jericho and I was surprised when he answered that it wasn't him."

Later, the school's head Rabbi asked Marvin: "W hen you asked Benjamin Solomon who blew down the walls of Jericho, he said it wasn't him. True?"

"And his father vouched for Benjamin’s honesty, so --"

The Rabbi interrupted: "Alright already. Just arrange to get the walls fixed and ask the builder to send me his invoice."

"His kishkes were gripped by the iron hand of outrage and frustration. Among other misfortunes, I was his wife's favorite." -- Excerpted from Portnoy's Complaint

Abe, the rich papa was introducing David, his son into the business.

“But big shot, don’t think you’re coming in here and taking over!” Abe admonished. “You’ll start as a partner, just like the rest of us did!”

On his wedding day, David’s father-in-law made him an offer.

“David, I don’t want my daughter to want. I’m bringing you into the business as a full partner. Now, what department? How about finance?”

“The only market I know is Kroger.”

“Well, how about sales?”

“I have a better idea. How about you buy me out?”

“My father heard one woman yell at a butcher that she was mad at, ‘May you have an injury that is not covered by workman's compensation.’ That was his favorite curse.” -- Calvin Trillin

Samuels, 79, was on the operating table awaiting surgery, to be performed, at this insistence by his own son, a renowned specialist.

“Before they put me out, sonny, I want to say one thing.”

“I just want you to know, you shouldn’t be nervous. Do your best. And just remember, if things don’t go well, should a knife, God forbid, slip, your mother’s coming to live with you and your wife."

After creating heaven and earth, God created Adam and Eve. He told them:

“Because I am your Father and I said so!" said God. A few minutes later God saw his kids having an apple break.

“She started it!” Adam said.

Having had it with the two of them, God's punishment was that Adam and Eve should have children of their own.

New Fruits for the New Year

Guilt Trippings
Should I Break Up, Get Engaged or Keep Dating?
Time Is Your Precious Commodity
A Constant World in Flux
Comments
MOST POPULAR IN Jewlarious
Our privacy policy