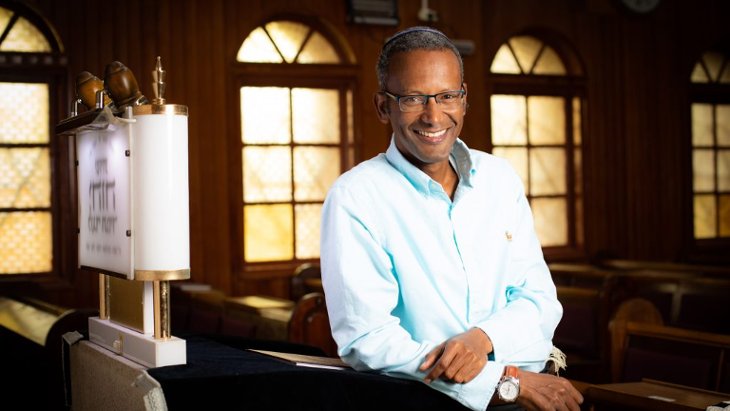 As an 8-year-old boy, Sharon Shalom crossed the Sudan desert to the Red Sea to realize his dream of reaching Israel where he became the first Israeli-trained Ethiopian rabbi.

Sharon Shalom grew up with the name Zaude Tesfay in a Jewish village in Northern Ethiopia with no running water or electricity.

“It was a simple life,” he told Aish.com. ”There were no toilets, no technology and we lived in huts made of straw and mud. We knew nothing of the luxuries we have today”

“There were around twenty families and we lived together. We were disconnected from the local population who were mainly Christian.”

Many historians trace the Jews of Ethiopia back around 3,000 years to the reign of King Solomon who dispatched 400 men from the tribe of Dan to accompany the Queen of Sheba back to Ethiopia after she had visited him in Jerusalem. 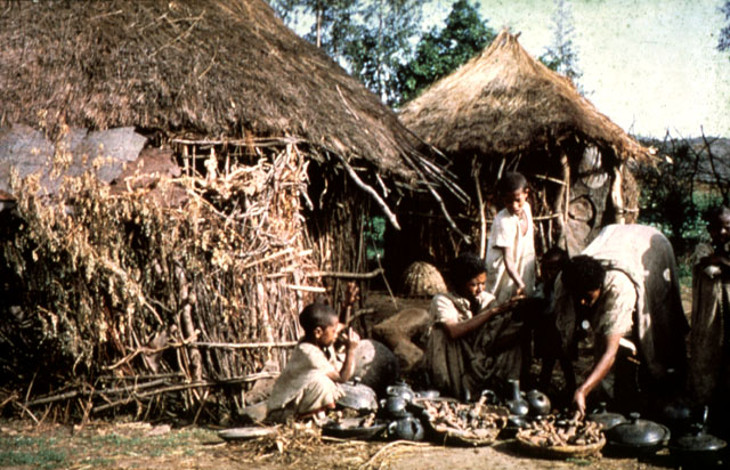 A Jewish village in Ethiopia dated 1964

In contrast to the majority of Diaspora Jews dispersed after the Roman conquest of Israel, Ethiopian Jews had no knowledge of the destruction of the Temple, nor many of the Jewish laws subsequently taught by the rabbis in the Talmud.

“Our synagogue was the center of our communal life. Men and women prayed separately, we celebrated festivals like Passover and Sukkot, and we rested on Shabbat. The towns around us called us the ‘people of the river’ because it was known we would regularly immerse ourselves to stay clean and pure.”

“I would sit with my grandfather who would quote by heart the prophecies in the Bible that God would one day take us to rejoin all of the Jews from the whole world. We lived with such hope that one day we would be brought home. If there is one thing which defines the Ethiopian community more than all else, it is this hope, this optimism, that was passed down over thousands of years, that one day we would be redeemed.” 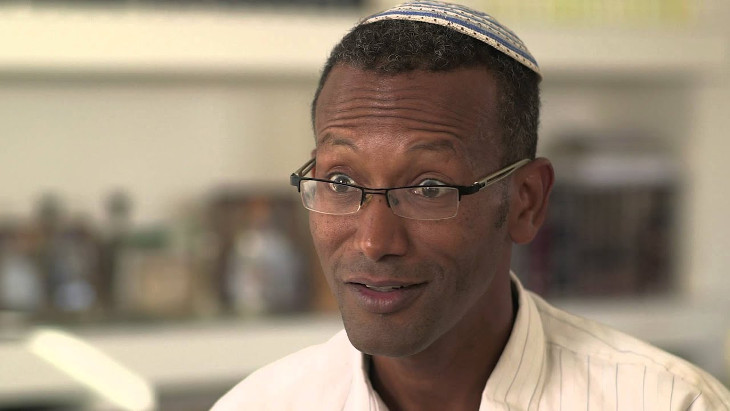 Realizing this Biblical promise not only filled Sharon’s thoughts and dreams, it led him and a friend at the age of seven to leave the village in search of Jerusalem.

“At seven years old, I asked my grandfather where Jerusalem was and he pointed over the horizon. A friend and I packed a bag and we left the village to walk there.” He smiles. “We got lost and after a few days we came home.” Although unsuccessful, Sharon’s resolve just grew stronger and six months later, as Ethiopia slipped further into civil war, another opportunity emerged.

With the overthrow of Emperor Haile Selasse in September 1974, many regions in the country were engulfed by violence and lawlessness, During the years that followed, hundreds of thousands of Ethiopians left northwards fleeing the violence arriving at refugee camps in Sudan, the Jewish community among them.

“We, the Jewish community, were not running away from war,” Sharon says. “For us, it was far more an opportunity to get one step closer to the Land of Israel.

The journey northwards exposed refugees to attacks, along with illness and hunger with some members of Sharon’s village dying on route. “When we arrived at the sprawling camps, conditions were very poor. It was chaotic, there were rapes, violence and disease. The children were particularly at great risk.” 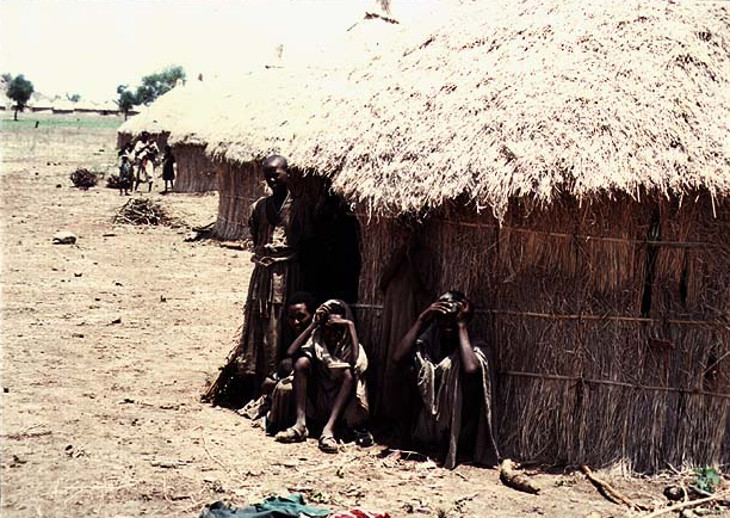 Amid an impending humanitarian crisis, and aware of the stream of Jews who had fled north to Sudan, Israel’s parliament, under the leadership of Menachem Begin, passed a law committing Israel to bring the Jews of Ethiopia home.

Shortly after, the Mossad began a series of covert missions to bring the Jews home. Operation Moses in 1984 and then Operation Solomon in 1991 brought tens of thousands of Jews to Israel mainly by air, removing the seats of planes, flying thousands to safety in quick succession to avoid famine and war. Now the subject of the Netflix movie, Deep Sea Diving Resort details how Israeli secret service agents also set up a diving school as a diversion as they smuggled thousands of Jews to the Red Sea Coast and then northwards to Eilat by boat.

After spending a year in the camp, fearing for his safety, Sharon’s mother sent him to join a group of Jews leaving for Israel. He was eight years old at the time. 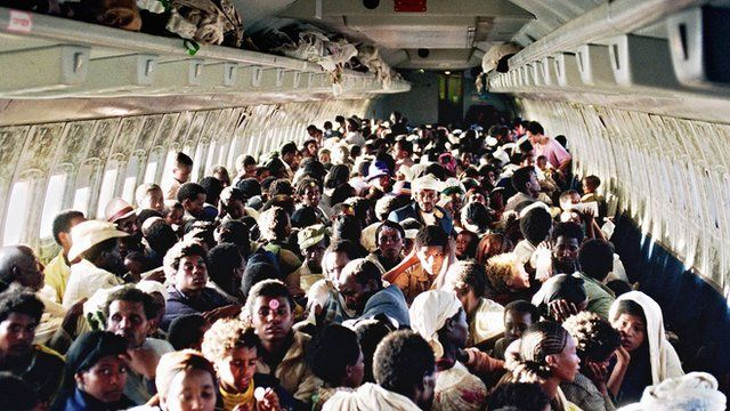 “Although Some of our friends had gone to Israel already, I didn’t know anyone else among this group, I was completely alone in my thoughts.”

“Ever since I was a boy, I had always tried to take responsibility for myself, but on that journey, I decided that my way in life would be not to expect things from others.”

“One day in the middle of the night we left the camp on foot. No one spoke, it was total darkness and very dangerous. The group numbered around three hundred, and after several hours, we reached two army trucks.”

The greatest fear was that Sudanese soldiers, notorious for their crackdown on illegal immigration, would stop the trucks and kill them as they had killed many other refugees who had left the camps. 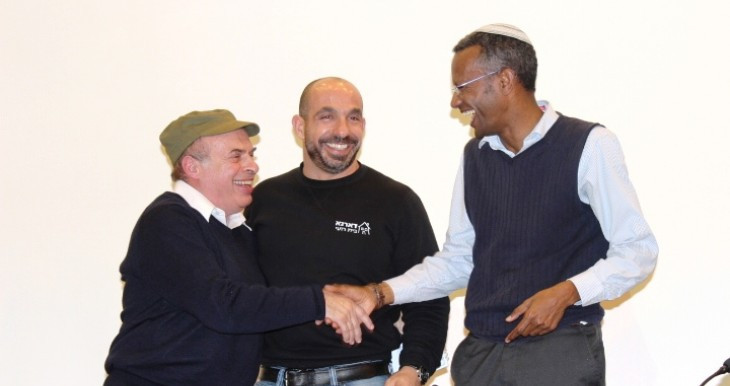 Forbidden to speak, and still under the cover of night, the group, 150 people crammed into each truck, traveled off road on a rocky trail until they reached the Red Sea coast.

“We heard a loud roaring noise, I didn’t know what it was. As we got closer, I understood it was the noise of the sea. I had never seen or heard the sea before and was very afraid.”

Amid the sounds and fears, Shalom was greeted by a sight that will be forever engraved in his mind: the faces of Israeli soldiers, overcome with emotion as they loaded their Jewish brothers, remnant of a 2,000 year old exile, on boats to rejoin their people.

“They were wearing black diving suits, they didn’t didn’t speak to us, but they were crying. To us they were like angels, and they brought us to Israel.”

"When we arrived in Israel we kissed the ground from excitement," he recalls. "We felt like we were home. It was like a dream come true.”

Sharon began his new life in a youth village for new immigrants in the central city of Or Akiva. “Israel was so different to my village in Ethiopia. I remember seeing lights everywhere and people with electronic gadgets and machines.”

“Shortly after settling in, we were brought to Jerusalem and the Western Wall. We cried and cried. Many adults wept for the Temple’s destruction. I remember thinking of my grandfather, the prophecy I saw being realized, and all of his words flowed back to me.”

A year after arriving in Israel, Sharon was called to speak to the counselor of the youth village. The counselor broke the news that Sharon's family had died in Ethiopia. There had been a wave of brutal attacks on the refugees in the camps and his family were among those unaccounted for. The loneliness was palpable.

“It is the most terrible thing, to be told you are an orphan.”

Despite the anguish of loss and knowing he would not see his family again, Sharon stayed optimistic about his future. 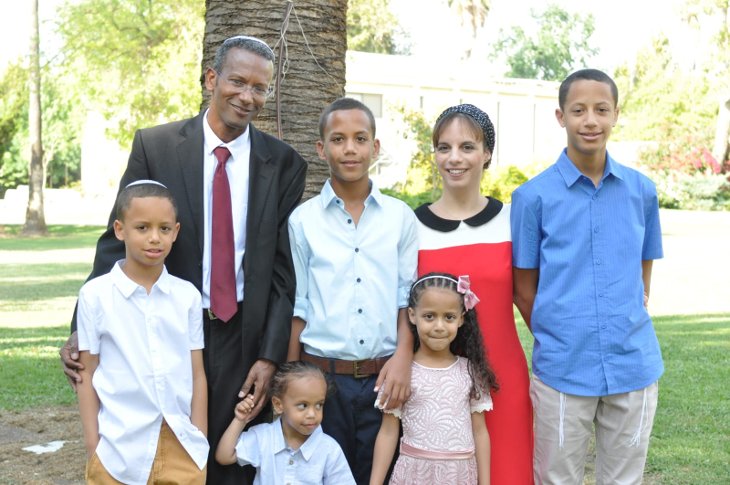 Sharon and Avital with their five children

“This is at the heart of what it means to be an Ethiopian Jew,” he says. “We lived with a promise from God in our pocket of thousands of years and none of us ever forgot that. We never stopped believing and I knew I was the living the fulfilment of that prophecy. My response to tragedy was to be even more resolved not to give up and just to take even more responsibility for myself.”

Two years later, when he was eleven, Sharon was given the breathtaking news that his family was alive and had also arrived in Israel! Contrary to the initial reports of their death, they had fled the violence in the refugee camp and later returned joining up with other Jews hoping to reach Israel. Overjoyed, he traveled to greet his mother, father, siblings and his ageing grandfather. “It was even more of an emotional reunion because, incredibly, my family had also been told that I had died on the way to Israel.

“The Jewish people is the nation of hope,” he says, “and no one knows it better than we do. This moment of rediscovering my family and how grateful I felt to have them back remains with me every day of my life.”

An Officer and a Rabbi

Growing up in Israel, Sharon realized his first dream of serving as an officer in the IDF before turning to his love of Judaism, hoping to become a rabbi. After enrolling at the prestigious Har Etzion Yeshiva, he was introduced to his future wife Avital, a Swiss-born social worker and art therapist. “Switzerland is a world away from Ethiopia,” he says, “but this is the beauty and wonder of the story of the Jewish People and we have five wonderful children.” 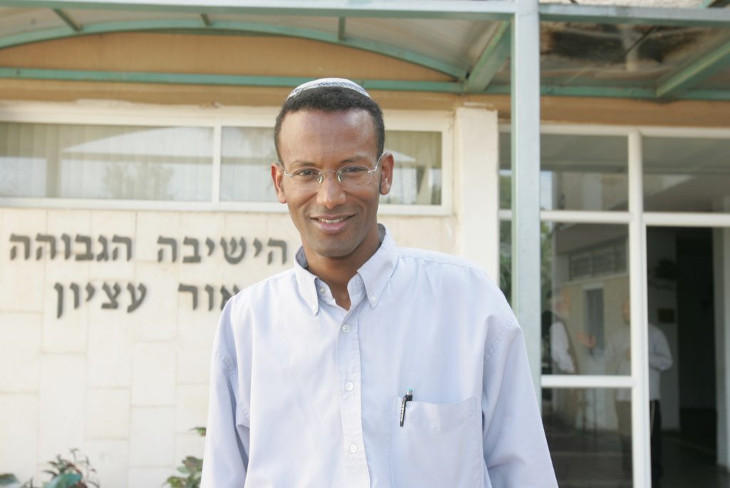 Sharon at Har Etzion Yeshiva where he studied to become a rabbi.

After being ordained in 2001, Rabbi Shalom enrolled at Bar Ilan University completing a doctorate in Jewish philosophy and began teaching in his home town in Kiryat Gat where he now serves as the Rabbi of the Kedoshei Israel synagogue. He was appointed chair of the first international research on Ethiopian Jewry, located in Kiryat Ono College.