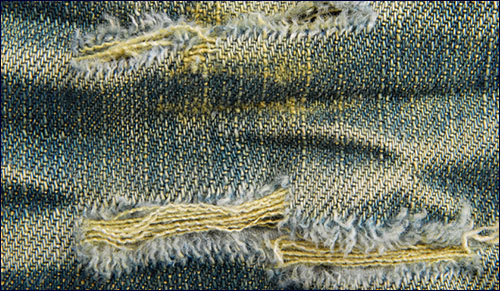 My husband is like Mr. Sustainability when it comes to his clothes, using them up until they are utterly and incontrovertibly no longer usable.

“Do you think you can take this to the dry cleaner and get new elastic in these sweat pants?” my husband asked innocently, holding up a garment that is so stretched out that not only my husband but three of his closest friends could all fit inside. There are two gaping holes on one side of the sweats and a ripped seam on the other, yet I pretend to give this question serious consideration. After more than two decades of marriage, I’ve learned that it’s a bad idea to laugh out loud at a husband’s more peculiar questions. I am grateful that I went to drama school on weekends during my youth.

“Do you think you can take this to the dry cleaner and get new elastic in these sweat pants?”

I bite my lower lip, trying not to burst out laughing. I am being sorely tested, despite my drama lessons. Good spouses understand the need for occasional lip biting, but as my teeth gently chew away, I also remember that I never made an appointment for Restylane injections or any other rehabbing maneuvers for my poor bottom lip, nibbled and gnawed since the late 1980s, all in the name of marital harmony. One day I will correct this oversight.

“Actually, honey, these sweat pants also have holes,” I say, pointing to the air pockets large enough for seagulls to fly through. “Let’s spring for a new pair at Target.”

“Really?” he says, noting the defects with surprise. “Too bad. Otherwise they’re still perfect. What’s this bag from Banana Republic?” he asks. Why is it that he can miss these gigantic chasms in his own clothing, which have been there for months, yet have radar for an itty bitty parcel tucked discreetly in a corner of a large, cozy chair?

“Just a little sweater,” I say, clutching it safety in front of my chest. I’m no crazed shopper, so there’s no reason for me to feel ashamed or embarrassed. But marriage to a man this committed to clothing conservation, a man who must be forced nearly at gunpoint to get to the mall every five years or so to replenish the shirts and pants that are so frayed, faded and air-conditioned that I cannot in good conscience even donate them to Goodwill, can’t help but make me feel guilty for refreshing my look a few times a year. In my defense, I also have clothing of distinguished longevity, a few nearly qualifying as “vintage.” However, I draw the line at any garment with exhausted elastic and air pockets not in the original design.

On one hand, I admire my husband’s commitment to the mitzvah of baal tashchit, not wasting resources. This man is Mr. Sustainability himself when it comes to using things up until they are utterly and incontrovertibly not usable. And thank God, my husband’s sentimentality for things he has had title to for decades offers me much reassurance that I will not be traded in for a newer, more up-to-date model, too. Jewish husbands tend to be like that, which is why they are in such high demand among single females at large. This means either they still really love us or they are terrified of the kind of lawyer we’ll hire if they try to trade us in.

Anyway, I figure that despite our sartorial differences, my husband and I are still very complementary as a couple. His aversion to updating his wardrobe is balanced by my conscientious efforts to upgrade my look at decent intervals. Not only am I aiding our still recovering economy, but am also preventing a dangerous imbalance in the cosmos at the same time.

My man is always handsomely dressed for Shabbat and other formal occasions, but I have sometimes stealthily caused some of his favored old duds to “disappear,” like a kidnapped Mafia don, never to be seen again. When he asks where that old Pendleton shirt went, I channel my inner actor and feign ignorance. But there are limits as to what he will tolerate.

One small story illustrates my point. One evening, my husband and our youngest son were nearly two hours late returning from a hike. It was already dark, I hadn’t heard from them, and I was pacing the living room trying not to panic, and failing miserably. As I sat there reciting Tehillim for their safe return, they suddenly charged through the door looking like they had been in a knock-down fight on the dusty streets outside the OK Corral. They steadfastly refused to tell me exactly what had happened, and would only admit to having had “an adventure” involving an unmarked mountain path and some tumbles down a hillside. I stood there, all color drained from my face, relieved yet angry at the same time. Meanwhile, my men were grinning from ear to ear. Jewish guys like my husband, who runs a business, and our son, who attends yeshiva, don’t have a whole lot of opportunity to come home bruised and scraped, and I believe they enjoyed the manly feeling. Their cuts and bruises would heal, but their clothes were now in rags, and I judged them in terminal condition: mud caked down into the very fibers, long, jagged tears, and huge swaths of material gouged out.

After they showered, my husband saw with alarm that I had bagged their hiking outfits for the trash. “What are you doing?” he asked in outrage. It was if I was junking the gold cufflinks his father had given him. If I had to explain why I felt these ragged togs were no longer fit for the human wardrobe, I had already lost the argument. To my husband and son, this tattered, filthy ensemble was a memento of a battle between man and the elements, a souvenir of a fabled experience shared by father and son. The two of them still wear these outfits for exercise like soldiers proudly wearing Purple Hearts.

Meanwhile, the other stretched-out sweats are enjoying new life as dusting cloths, and I am now headed to Target to get a replacement pair. And you just never know what I might find in the women’s section, too.

The Yiddish Are Coming