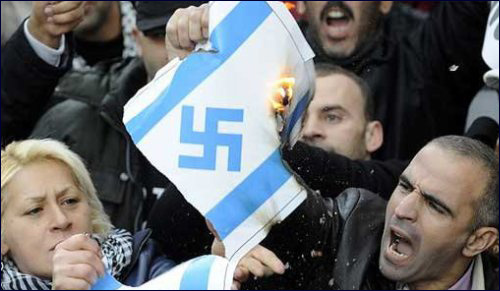 If France is not safe for Jews, then the very future of Europe – and indeed the civilized world - is in real danger.

The voices proclaiming that France is no longer safe for Jews and that they should, therefore, emigrate are dangerously misguided. If France is not safe for Jews, then the very future of Europe – and indeed the world – is in jeopardy.

History has demonstrated that Jews are the proverbial canary in a coal mine. Just as canaries in a mine die before humans are aware of undetectable toxic gases, such as methane and carbon monoxide, and in dying warn of impending disaster, so is the state of Jews in their societies the test for the safety of the environment there. If the Jews in a particular society are, like the canaries, singing and thriving then all is well. If not, that is an early warning of danger ahead. Sometimes, threats of danger to civilization are not noticed. The miners rely on their canaries, and the world ought to rely on the position of Jews to assess the threat level to civilized society.

In 1933, the danger that Adolf Hitler posed to the world was not yet clear, but when Jews became unsafe in Hitler’s Germany, that was a sign of the toxins of hatred seeping into the world – toxins that tragically went unnoticed until too late, and which eventually engulfed humanity in a war that lead to the death of 60 million people.

The plight of Jews in France bodes evil for the world.

The toxins of radical Islam were not initially evident there. But later the canaries stopped singing and started dying. A few years ago, the murder of Rabbi Sandler and the young children of the Jewish day school in Toulouse occurred, followed by many other attacks on French Jewry, all of which were early warning signs of the lethal threat posed by radical Islam. A society in which Jews are not safe will ultimately not be secure for journalists, or for freedom, or for any values of human decency. Thus, the two atrocities of last week – the savage killing of journalists at Charlie Hebdo and of Jews in the kosher supermarket are connected in a profound way.

The chilling and ironic symbol of this connection is the Grand Synagogue of Paris. On the Shabbat after the attacks, the synagogue was closed for services for the first time since the Nazi occupation of France. A society in which synagogues cannot open freely and in which Jews are not safe is one that is itself in danger. If Europe becomes Judenrein once again, the civilized world will have succumbed to the worst forces of barbarism and savagery.

World Jewry must stand shoulder to shoulder with the Jewish community of France, but so must every civilized nation on earth, for the future of the whole world depends on it.

The real message that needs proclaiming is that France must become safe for its Jews if the world is to defeat the forces of radical Islam that seek its destruction.

Any country where a Jew cannot live in safety and security presents a foreboding sign that the forces of freedom, tolerance, human dignity and sanctity of life are under threat there and that toxic forces exist, which undermine the very survival of its society.

The signs globally are not good. The fact that virtually every Jewish institution – synagogues, schools, community centers – throughout the globe, has to be heavily protected against the threat of Islamist terrorism, is a sign of the dangers that the civilized world faces from these ominous forces. The fact that Jews cannot exist in places such as Pakistan, Saudi Arabia and many other Muslim countries, is a moral disgrace which portends danger for the very future of humanity.

The warning signs have been manifest for many years. What individual Jews are to the societies in which they live, the State of Israel is to the community of nations. Israel is the canary in the coal mine of the community of nations. Suicide bombers first launched themselves against the State and people of Israel, and then after that came the attacks of 9/11 in New York, 7/7 in London, in Bali, and in many other places. The violent extremism of Hamas and Hezbollah were originally directed against the Jewish State, but now similar forces engulf and threaten the very existence of Iraq, Syria, Nigeria and others.

And as the great powers of the world negotiate with the Islamic Republic of Iran, they should realize that while today its nuclear ambitions are directed at Tel Aviv and Jerusalem, history has taught that tomorrow their targets will be Paris, London, New York and Cairo.

Poisonous gases are rife throughout the world. In the week before the Paris attacks, allegedly 2,000 people were butchered by Boko Haram. And then in the week of the attacks 10-year-old girls were sent as suicide bombers to attack markets in Potiskum, Nigeria. This came a few weeks after barbarians butchered more than 200 children in Peshawar, Pakistan. These attacks constitute the dire danger and sickness of a brutal and savage movement that threatens all civilized decent people throughout the world.

Now is the time to act.

The future of the civilized world is at stake. A global alliance of people from across all faiths – Jews, Muslims and Christians together – and countries must rally together to defend human civilization from jihadist barbarism. The test of victory will be the state of the Jews. When people around the world declare “Je suis Juif” (“I am a Jew”) – they are touching a profound truth, upon which the survival of humanity depends. When Jews, like the canary in the mine, are singing and thriving, and can once again safely walk the streets of Paris, and all of Europe, openly and proudly, when synagogues and Jewish schools don’t need armed guards to be safe, when the State of Israel isn’t faced with mortal enemies constantly seeking its destruction, then we will know that the civilized world is safe once more.

Turning Our Backs on Israel