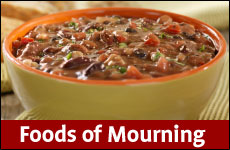 While there is no official “Jewish mourning diet,” grieving Jews traditionally eat lentils, eggs and bread. This diet is followed at shiva houses and also for the Seuda Mafsekes, the meal preceding the Tisha B’Av fast when all Jews are mourners. Interestingly, these foods also connote fertility and rebirth just as Tisha B’Av carries an echo of the promised redemption. 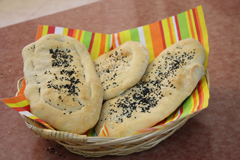 Flat and oblong, Na’an, the traditional Afghani pita, is the humblest of breads. Chewy on the outside, spongy on the inside Afghani Jews eat it for the Seuda Mafsekes and also on Shabbat and holidays. If you replace the seeds with olive oil and oregano Na’an dough can be used to make focaccia.

Knead in the flour. You can do this with a dough hook on standing mixer using a slow setting. Continue to knead until the dough forms a ball.

Oil the dough ball, cover it with a towel and leave it in a warm place until it doubles in bulk . 2-3 hours depending on the weather.

Punch down the dough

Preheat oven to 475F or 250 C. (this is very important because the Na’an bakes quickly)

Divide into six sections. Roll each section into thin ovals ¼ inch thick. Then with wet fingers make deep grooves in the middle of the oval. The contour of the dough will form a crust. Sprinkle the seeds inside the grooves.

Let the ovals sit for 10 minutes 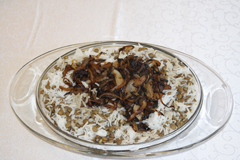 While Jewish law requires that only two dishes be served at the Seuda Mafsekes, the pre Tisha B’av meal, Majadara which consists of lentils, rice onions cooked together is considered as a single dish. Majajarah, Arabic for “having smallpox” referring to the brown lentil specks in the white rice, is also eaten on Shabbat with huevos haminados, the long cooking eggs of the hamin (Sephardi chulent). Low in fat, and rich in iron and fiber and a perfect protein, Majadarah is super healthy and super yummy.

Soak lentils in water for 4-5 hours to soften them so that they can cook together with the rice.

Add 6 cups of boiling water, bring to a boil then lower flame and cook in a closed pot for 20 minutes until water is soaked up.

Spoon into a serving platter with the fried onions on top. 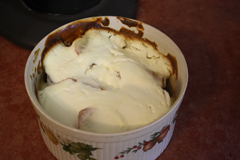 Rakot Krumpli or potato casserole (krumpli is potato is Hungarian) means layered or pleated potatoes in Hungarian. While my Hungarian born mother insists that this dish isn’t a specifically Jewish, when I looked it up online I discovered that non-Jews make it with sausage so this recipe is the Jewish take on an old Hungarian peasant favorite.

Preheat oven to 350 F or 180 C. Peel and slice the boiled potatoes into 1/4-inch-thick slices. Peel eggs Layer the potatoes and eggs in a buttered casserole sprinkling each layer with salt, pepper and paprika. If you are using cheese sprinkle it between the layers.

Pour sour cream over casserole and bake about 30-45 minutes or until heated through, potatoes are tender and top is golden. 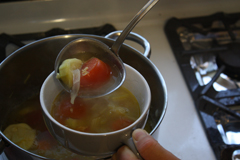 Remember how Esau sold his birthright for a bowl of lentil soup? That birthright wasn’t the family fortune but rather the responsibility over the Divine service. Thousands of years later Esau’s descendants, the Romans, burned the Temple where that very same Divine service was conducted.

Sauté together one medium onion, two cloves of garlic and two celery stalks in 2 tablespoons in oil.

Add two carrots, two zucchinis, one potato or any other vegetable you’ve got lying around. Squashy tomatoes are especially nice.

Cook together for two hours on low flame. Enjoy.

Visit my blog at http://kosherhomecooking.com

Carol Ungar is a writer, mom, bubbie, and avid challah baker. She's the author of Jewish Soul Food--Traditional Fare and What it Means (Brandeis 2015) the first and only cookbook that not only shows you how to cook Jewish but tells you why. Available at amazon.com, bookdepository.com and bn.com.

Let's Have a Cookout - Part II

Something Fishy
Were Adam and Eve Jewish?
How I Learned to Love the Multiverse
10 Big Jewish Inventions
Comments