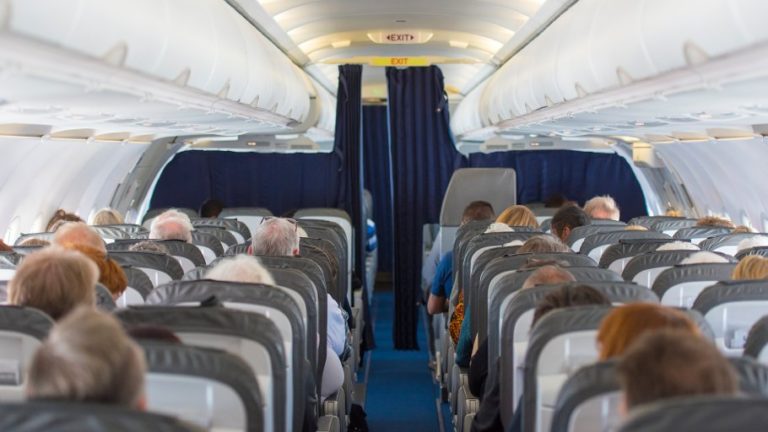 Suspicion can fan the odor of intolerance.

A family was kicked off a Miami flight recently, the father accused of not having showered. The airline failed to yank their luggage and stroller, so the booted-off couple, Yossi and Jennie Adler, then wandered the airport terminal, stripped of their material possessions and plaintively asking random passersby, “Do you think we smell? Because we just got kicked off a plane for smelling.”

Out of thousands of comments on this story on Yahoo News, not one questioned the report. Despite the fact that technology does not yet permit us to actually smell people by virtue of clicking on their photographs, the Yahoo beehive was roused and angry. “I have experienced these types of people,” one reader said; “from that pic, I’d say they’re one of those couples who believes in the ‘natural’ approach to personal hygiene,” said another. The only thing obvious about the couple from pictures was that they were Orthodox Jews. Others were less philosophical: “It’s called SOAP, use it!” Or, only slightly more offensively, “It should mean holocaust!!”

I’m skeptical about the story. Married men accompanied by their wives do not generally stink up public spaces, because guess who tells them if they do? This is not to cast aspersions on single men – many of whom smell lovely and like veritable walking, talking bars of Dove soap – but the fact remains that when there is someone particularly spicy in our midst, he is, more often than not, emitting spices alone.

Attributing vile odors to Jewish people has long been a part of anti-Semitic propaganda.

The charge of smelling, when you stop to think about it, is not only subjective but also tautological. Once someone becomes a Smeller, that automatically turns the other person into a Smelly. There is no way to prove the opposite. Yossi Adler reportedly cried out “there is no odor!” as he was escorted off the plane, but readers only took this protest as proof of how very smelly he must have been. As “scrumm21” opined from the safety and anonymity of his surely-immaculate basement perch, “When you’re ‘Convinced’ you don’t have BO . . . then you’re not going to change your habits.” Since attributing vile odors to Jewish people has long been a part of anti-Semitic propaganda – law student Husam El-Qoulaq disrupted a 2016 panel at Harvard featuring Israeli politician Tzipi Livni to ask her why she was “so smelly” – it raises the question of whether certain groups of people are more likely than others to get booted for pungency.

I’ve had my own experience of this kind. Fourteen years ago, my husband and I and our infant son were on our way to Las Vegas for a family reunion when United Airlines tried to boot us off the flight. The trouble began with an impassive gate agent who didn’t want to let us pre-board with our baby’s car seat. This was back when United had a discount airline called TED, and since saving money with crummy plane parts is frowned upon, it seems that they had skimped on their customer-service training instead. “They think they’re special!” a man near us declared. He glared at us, and I noticed that his face was a canvas of long knife scars. When we finally boarded with everyone else, the man wasn’t done with us: he jabbed my husband in his back with his elbow as we turned to put our suitcases overhead. My husband whipped around, only to see our nemesis leaping to seat himself two rows in front of us.

Soon our assailant was gesturing wildly to the flight attendant in our direction. The flight attendant then paid us a visit to let us know that our place on the flight was not to be taken for granted, as “other passengers are complaining about the smell.” Another flight attendant approached, coolly explaining that we would “simply have to de-plane.” Having studied analytic philosophy at Williams College, I knew that “de-plane” was a euphemism for “your goose is cooked,” but in order to postpone our fate, I pretended not to understand. (“Did you say your name was Elaine?”) Then the gate agent appeared at the end of our aisle, scolding me for the way our son was holding his sippy cup: “Can you please get control over your son’s sippy cup?” I realized that this was not just about one man’s hatred; a critical mass wanted us off the plane.

“I’ll get the captain,” another flight attendant said, returning a moment later with a stern, middle-aged man in uniform.

The short, intense captain took one look at him and one look at me, clutching our baby, and then he did an amazing thing: he correctly assessed the situation. He marched over to our adversary, and wagging a finger, told him: “I don’t want to hear one more word out of you the rest of this flight, do you understand me? I don’t want to have to land this plane in Kansas City and have you taken off the plane.” He returned to the cockpit, and the plane was soon airborne. The flight attendant who had just asked us to leave suddenly became very charming, offering us Sprite and pretzels. Needless to say, we didn’t feel like eating.

My husband and son now wear baseball caps over their yarmulkes whenever they fly, and they’ve never been accused of smelling since.

My husband and son now wear baseball caps over their yarmulkes whenever they fly, and they’ve never been accused of smelling since. A coincidence? Maybe. Or, if observant Jews being identifiable as such are more likely to be targets, then they would be less likely to be targeted if not immediately recognizable as Jewish. Mocking religious Jews seems to be in vogue. Christoph D’Haese, mayor of the Belgian city of Aalst, recently defended a grotesque float of giant, sneering Hasidic puppets standing on gold coins with money bags at their feet. Several dozen people on the float – dancing to a ditty about “getting extra fat” and filling coffers to make them “Jewishly beautiful” – were apparently just trying to have fun. “Carnival participants had no sinister intentions,” explained the mayor. It would be sinister, however, if soon the only visibly-Orthodox Jews in Europe were of the plastic sort atop this float. After an 8-year-old boy wearing a yarmulke was savagely attacked by strangers in the northern Paris suburb of Sarcelles, community leaders in both France and Germany have warned Jews in the past year not to wear headcoverings in public as they may be killed.

Closer to home, while Jews make up just 2 percent of the U.S. population, they account for more than half of those targeted by religious-based hate crimes. And in 2017 – the most recent year for which numbers are available – the FBI reported that anti-Semitic incidents in the U.S. increased by 57 percent. (This figure does not include incidents that cannot be “proven” to be hate crimes but are nonetheless disturbing, such as last month when a man kicked a stroller with two kids inside, in the predominantly Jewish neighborhood of Crown Heights, and treated the young mother to an expletive-laden rant to “move out of the way.”) The Democratic Party’s refusal to condemn Representative Ilhan Omar’s spate of anti-Semitic comments is revealing, especially now that Chelsea Clinton ended up as the one condemned by Leftist protestors – for the crime of speaking out against anti-Semitism.

These days, when I read that an airline had a problem with a passenger, I know that the official story is not necessarily true. I don’t doubt the existence of intolerable body odor. But until such time as we invent a Smellalyzer – which will enable us to boot passengers emitting above a Level 10 – we should make sure that the Smell Police aren’t just trying to crack down on unpopular passengers.

Wendy Shalit was born in Milwaukee, Wisconsin, and received her Bachelor of Arts in Philosophy from Williams College in 1997. This year is the 20th anniversary of her first book, A Return to Modesty: Discovering the Lost Virtue (Free Press, 1999).

Over the Top Bar Mitzvah Videos

Ruling the World
The Blue Beyond
Great Place to Live
Is Eating Supposed To Be Spiritual?
Comments
MOST POPULAR IN Israel
Our privacy policy