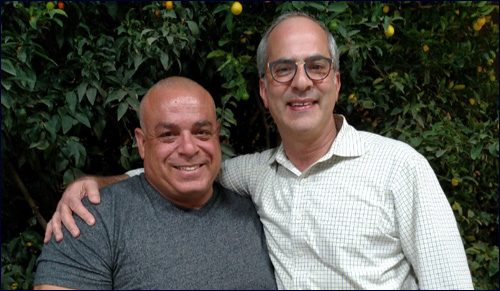 35 years ago they changed each other’s lives and drifted apart. Then Facebook brought them together again.

They warned me: Never set foot in Sh’chunat Hatikva. The so-called “Neighborhood of Hope” was anything but.

It was notorious as the most dangerous neighborhood in Tel Aviv and the home of the leading crime bosses in Israel. But as a 20-year old, I figured I knew better. I was part of a group of volunteers who had arrived in July, 1982, at the height of the First Lebanon War, and we were determined to give underprivileged kids a wonderful summer experience by running day camps and taking them on trips unlike any they had ever taken.

A secondary part of our job was to teach the kids English. Many of the kids came from difficult homes and needed all the support and help they could get.

Uzi Mishan was a well-adjusted 10-year-old from neighboring Yad Eliyahu, and his grandparents lived in Sh’chunat Hatikva, across the street from me. They were Holocaust survivors from Greece and, like many in the neighborhood, were not particularly fond of Jewish tradition. They were great people and became close friends of mine, always going out of their way to buy snacks with the best kosher certification so that I would feel a part of their home. Uzi and I became close - he was in my bunk in the summer camp and was very mature for his age. He was a born leader and athlete, and the other children naturally gravitated to him. If Uzi approved of a trip or activity, so did everyone else. He was a great sport and never lost his cool on the soccer field.

But things looked bleak when it came to English. The first time I tried teaching Uzi we were in his grandparents’ living room on a blistering hot day. The ceiling fan was lazily moving hot air around the room, making it even hotter.

“Uzi, please read me the top line,” I said to him in Hebrew.

Uzi writhed in his chair and read me the ABCs. His heart wasn’t in it. Neither was mine.

“Uzi, tell me the truth. What would you rather be learning with me?”

He and his family were completely irreligious. “What contact do you have with Torah?” I asked.

“Every night when my parents tuck me in, I sneak my father’s army Tanach (Bible) under the covers, turn on a flashlight, and read the stories. You can test me.”

“Who was Avner ben Ner?”

“Uzi! I can’t believe what you know! It’s a deal! We’ll learn Torah from now on.”

He was thrilled and so was I. I resigned from my capacity as an English teacher and began teaching Uzi stories from the Talmud. Leader that he was, he quickly gathered other neighborhood kids to hear my tales and by the end of the summer, I regularly had 15-20 children listening to me around a tree.

Because of Uzi I decided to teach Torah for the rest of my life.

Based on those experiences I decided I’d be a teacher of Torah for the rest of my life.

We parted ways after the summer, and other than a couple of calls and two short visits when he was 14 and 16, we pretty much lost touch for the next 35 years. But I never forgot what an inspirational person Uzi was, even at this young age.

In fact, I mentioned him this past Yom Kippur when I was running a beginner’s workshop at the Etz Chaim Center in Baltimore. We were discussing the purity of a Jewish soul and how it naturally gravitates to God. I thought of Uzi as a paradigm and told my audience about him.

“Whatever happened to him?” someone asked.

I was a little embarrassed. How did I let someone so special slip away from my life?

“Well, I did try once to look up his phone number online, but there were too many Mishans in the phone book, and I didn’t want to go through all of them,” I said weakly.

It seemed so inadequate when I said it.

And then it dawned on me: Why not try and find him on Facebook?

Right after I broke my fast, I went to Facebook and typed in Uzi Mishan in Hebrew. Several names came up. I looked at the pictures and one guy seemed like he could be the one. But I couldn’t tell. The 10 year old I once knew was now 45! Could this be Uzi?

I quickly private-messaged him. “Are you the Uzi Mishan who was in the Hatikva Neighborhood in ‘82?” I wrote in Hebrew, and signed it as Shlomo Horwitz from Baltimore.

And then I went to sleep. Or tried to. I was so excited I found myself waking up repeatedly. I waited until 7 AM to check my phone in the kitchen and found the following message:

Three months ago my wife and I went to Israel to our family, and part of that family was Uzi, his wife Celli, and his kids Rom, Ravid and Raz, who live happily in Be’er Yaakov in Central Israel. Reuniting with him was one of the happiest days of my life. 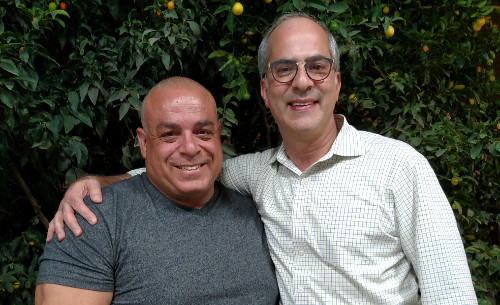 Uzi and the author, reunited after 35 years

As part of our massive catching-up, I learned that Uzi had become a professional wrestler in Israel after his army service. He was intensively physically fit and now runs a successful business as a party planner.

Uzi now knows that I’ve been involved in Jewish education ever since I met him, because of him. He told me that he has never stopped attending Torah classes since I studied with him back in 1982, and has studied with a host of rabbis in the Tel Aviv and Be’er Yaakov area.

Uzi also shared something deeply personal with me and urged me to share it with you.

When he was 29, he was diagnosed with a genetic neurological disease called CMT (Charcot-Marie-Tooth), which is incurable. Although some people have mild symptoms, Uzi’s case was so severe that he had trouble walking and moving around. His legs and shoulders were in pain and he had issues with the soles of his feet and his knees. His muscles began to atrophy and get smaller to the point where he had difficulty picking things up. His hands would shake from the strain of even holding a cup of coffee. His doctor told him to start winding down since he’d shortly be disabled and unable to work at his present job.

He was heartbroken and went to his rabbi in Tel Aviv, Rav Yechiel. Rav Yechiel immediately took Uzi to see the great Rabbi Ovadiah Yosef, the former Chief Rabbi of Israel, for his blessings. The venerable rabbi placed his hand on Uzi’s head and said a few words of prayer in a low voice. Uzi broke down and cried. He felt a strange sensation running through his body. 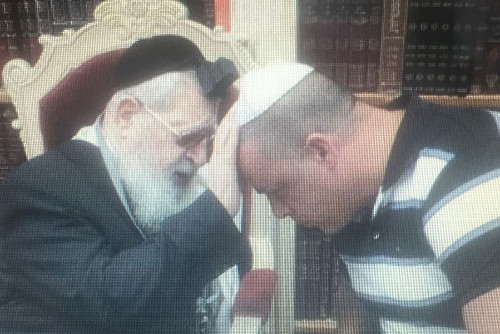 He left the rabbi and over a short amount of time all of his symptoms disappeared. He returned to the doctor who was thunderstruck that this was the same person whom he had just informed that he’d be disabled. The doctor ran additional electromyogram (EMG) exams to detect abnormal neuromuscular conditions, and determined that the underlying disease was still present but all the accompanying symptoms were gone.

Uzi has since gone back to his extreme fitness and can bench press 375 lbs, something unheard of for a patient with CMT. One year ago he had another EMG which still showed that the disease was present. But he is still marvelously strong and fit, and symptom-free. He and his family are grateful to God for this miracle. So am I.

With great joy, Uzi and I have started to learn Torah together once again.

What’s an interruption of 35 years between brothers anyway?

One Drink Too Many: My Journey of Breaking Free from Alcohol
The Scandalous History of the Aleppo Codex
Who was Two-Gun Cohen?
Why Really Everyone Believes in Free Will
Should Jews Support Ukraine?
The Jews of Cuba
Comments
MOST POPULAR IN Spiritual Odysseys
Our privacy policy