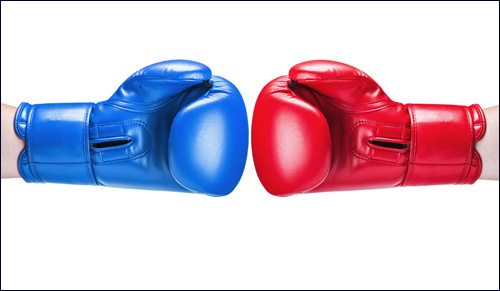 Non-Jews wait for the right time to argue. Jews must get everything off their chests immediately!

We Jews are nothing if not fair with the people in our lives. Fairness is a religious and cultural duty. But we have complicated rules, laws, and really long fables from before Moses, to prevent us from blowing like Krakatoa should, say, our mate take a shortcut his friend at shul gave him from New York to Miami – through Mississippi. After many years of working with people on how to manage anger I’ve learned: Don’t make a Jew mad. The “professional” strategies that work for others, with us? Not so much. Because you see, more than laws and anecdotes, We Jews also have – a certain personality.

FOUR FAIR FIGHTING STRATEGIES: THEM VS. US

THEM: Always choose a good time to argue.

A person who’s stressed, or has just come from 14 hours of work with no sleep is in no mood to hear: “Christopher! We have to talk! This minute!” He wants to change into his bathrobe, with a beer, maybe a computer game, and space – from you. (Think the distance to Jupiter.) Better to make an appointment to argue.

US: Always choose getting it off your chest now!

What? Your tooth is exploding, but you should wait till Dr. Fleigelman can give you “an appointment?” Of course not! Listen, if you hold in aggravation, you could wind up with an intense case of
“bile-imea” which will chew up your liver and end your relationship with corned beef. You should go through this, when he’s wrong?! Also, if you wait, till say, after dinner, you may be: a) too bloated to have a decent talk, b) you might miss “The Housewives of Ramat Gan,” or c) given our forgiving nature, forget what you were mad about altogether.

THEM: Always make sure each person has an uninterrupted time to talk.

When two people are talking over each other, who can understand the issue? No one. Worse, you may not hear what’s being said, or make an incorrect assumption and wind up arguing over the wrong thing.

US: Always make sure no one else gets a word in.

Should, heaven forbid, other humans talk, they may have a point we already know – or assume – and have decided to disagree with. Interrupting then, is one terrific time-saver. We also have the unusual ability to hear everybody better when they’re all talking at once. In the beginning, scientists thought it came from our running. When you have one minute to tell 1000 Jews to turn left at the desert, you’d better speed it up. However in 1947, Dr. David D. Dubinsky of Kielce, Poland found that We Jews have a distinctive genetic thingy for distinguishing up to 2500 voices at a time.

THEM: Always use words that do not attack, blame, or shame others, and add the word “I” along with the consequences to you of others’ behavior. A verbal attack is much like an assault. Once one hears: “You’re a liar” (“lazy,” “a drunk, “uncaring”) – you were, are, and always will be!” they’re probably not hearing you. Whoever said, “Thanks for calling me a liar, darling. Now, I know my problem!” Much better to say: “When you were late, I was worried.”

US: Curse in a foreign language and forget the “I.” There’s only you.

If you don’t blame and shame, they won’t know their problem! True, telling them in no uncertain terms may make them temporarily mean, but in the long run they’ll thank you for clarifying their personality. Or at least know they shouldn’t fool with you. However … civility demands a certain deftness, consideration – and the desire not to scar young children for life should they overhear, therefore it’s always best to mouth-off in Yiddish. Here are a few well-chosen words and expressions you can memorize:

An argument should not be seen as who is right/wrong, but a problem to be solved by negotiating a peaceful resolution.

US: Always negotiate so everyone else understands that you decide what’s fair.

It’s not only a blessing, but a mitzvah to point out how fair you have been, to insure their “future fairness.” If not, it’s up to you to decide the fate of the person who is too dumb to be a person. Should he or she refuse to accept your “negotiation,” you may say one of the following helpful yet clever sentences.

You should grow a wooden tongue.
If you were twice as smart, you’d be an idiot.
Your stomach will rumble so badly, you'll think it was Purim noisemaker.

As you can see, while the trendy shrinks of the month may give us “trendy” strategies, after more than 3000 years of rotten neighbors, We Jews know people!