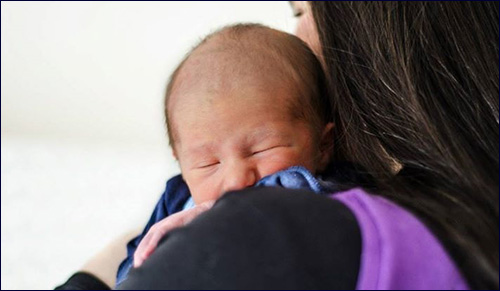 Growing up, Julie was certain of two things – she wanted to be a doctor and a mother. People tried to convince her that they were incompatible, but with her quiet determination she forged ahead, confident that she would be able to balance the two.

Julie met Adam* in high school and there was an instant connection. In November 2006, when Julie was in her second last year of medicine, they got married. They both loved children and couldn’t wait to be parents.

After two years of marriage, Julie completed her first year of medical internship. Her one goal almost within reach, she could not wait to start trying for a family. But God had other plans. A month later, Julie felt an unbearable pain in her right side. An ultrasound was done to confirm a suspected kidney stone, but instead they found a massive teratoma1 on her left ovary.

.Julie begged her OB GYN to leave the tumor in place until she had her first child, but the doctor was adamant that the risk was too great. The tumor was removed, and was thankfully found to be benign. During the surgery, a piece of her left ovary had to be removed, and they were given the all clear to carry on trying to conceive.

Five months later, Julie was visiting Adam’s grandmother in ICU and collapsed to the floor. An excruciating pain throbbed through the right side of her abdomen. Scans showed that her entire abdomen and pelvis were full of blood, but the source of bleeding was unknown. She was rushed into emergency surgery.

A cyst on her right ovary had ruptured.

They discovered a cyst on her right ovary which had ruptured and would not stop bleeding. She had inexplicably lost over half a gallon of blood and the only way to stop the bleeding was to remove her right ovary. Recovery was slow, but as soon as she recuperated, she was determined to carry on trying to conceive. Due to her complex medical history, her OB-GYN referred them to a fertility clinic.

All the routine tests were done, and nothing amiss was picked up with either Julie or Adam. After five months of standard ovulation treatment, Julie was found to have a severe form of Von Willebrands disease, a bleeding disorder which explained her previously massive blood loss. Her doctor was concerned about a cyst potentially rupturing on her remaining ovary and stopped fertility treatment.

The next stage was in-vitro fertilization (IVF). They were overjoyed when Julie became pregnant and excitedly told close family. But the very first ultra-sound revealed something wrong. As she lay on the examination table, Julie looked up at the monitor. The scan room closed in on her, and she felt surrounded by darkness. As a doctor, she knew exactly what she should be seeing – but there was nothing to see. She burst into tears, and the doctor confirmed Julie was carrying an ectopic pregnancy.

They carried on with treatment. IVF number two and three failed. For IVF number four and five, they used frozen embryos and these also failed. The scan room became her most dreaded place – after weeks of hoping and praying, she would look up and see no heartbeat, and her heart would break.

With each failed treatment, she became more reclusive, throwing herself into her work. She worked overtime and weekends, and the hospital became her refuge. By this time, all her friends were having babies of their own. Under the guise of being on call she could stay away from birthday parties, weddings and functions which had become too painful to bear. Only God knew the depth of her suffering, as she prayed and prayed.

She struggled to make sense of what was happening. According to fertility experts, there was no medical reason why the treatments weren’t successful. She desperately wanted answers – she repeatedly begged God to tell her if she had done something wrong, and how she could make amends.

After extensive testing, Julie discovered that apart from Von Willebrands disease, she also had a genetic clotting disorder. Her IVF treatment plan was altered and they impatiently prepared for IVF number six. They grasped onto this scientific cure, and believed that this would finally be the one.

When this treatment failed, Julie and Adam entered a bleak and painful time. They couldn’t imagine going back for further treatment. Emotionally and physically drained by all the efforts, they took a long break from any treatment. A friend gave them two tickets to Israel, and they had a rejuvenating holiday in the Holy Land.

Julie had tried every avenue. Physically, she had done everything from acupuncture to reflexology and meditation. She participated in a variety of Jewish customs which focus on fertility which she felt brought her closer to God in a tangible way. There were times when she was angry at God; but she turned to him as He was the only one who fully understood what she was going through.

Three years later, they were ready to try again. The Johannesburg doctors could not explain why the IVF wasn’t working. They were only 100% sure of one thing - due to her rare clotting and bleeding disorders and ovary issues – she would never conceive naturally.

They suggested a change of scenery, so Julie contacted a fertility expert in Cape Town. As a result of the treatment she had put on 40 pounds; and Dr Davies would not consider treatment until she had achieved significant weight loss. After years of reflexology, acupuncture and any possible remedies, dieting was easy. She began exercising and taking better care of her body. She lost 25 pounds, and took a month off work to spend in Cape Town for her seventh treatment. They spent the three-day Jewish holiday of Shavuot in a remote town with nothing else besides the clinic in it.

After two more failed IVF treatments, they decided they could not carry on like this.

They were convinced this one was going to work. And again, the scan showed no sign of life. They were losing hope. After two more failed IVF treatments, they decided they could not carry on like this. The treatments had taken a toll on her body as well as their marriage. After every failed IVF, she would cry in her bed for hours. They seriously investigated alternative routes such as adoption and surrogacy. She quit her demanding job, and found employment as a medical consultant.

On Rosh Hashanah, she sat in shul with an empty feeling. She had been begging God for a child for four years, and was at a loss. She did not know what else God wanted her to do. They decided they would take one last chance – a tenth round of IVF, and then commit to adoption.

As Sukkot approached, they were in a dilemma. On Simchat Torah there is auspicious custom for fertility known as Kol HaNearim when all the children stand under a tallit (ritual prayer shawl) and recite the blessings together with an adult male.

For the past two years, Julie and Adam had received the Kol HaNearim honor at their synagogue. As Simchat Torah approached again, they couldn’t bear being the object of people’s public pity for a third time. But when a distinguished rabbi offered them the honor at a sunrise prayer service, they could not refuse. There was no one there who knew their situation, and as Adam was called up to the Torah scroll, Julie sobbed. She wondered whether they would ever have a child of their own standing under the tallit.

In November, Julie’s very regular cycle was late. After all the months of disappointment, every month still gave her a spark of hope. Leaving work on the sixth day, she barely had the strength to walk up the stairs to the parking garage. She collapsed on her bed and half-heartedly did a home pregnancy test. When it was positive, she didn’t believe it. She did four more, and then sat on the floor in shock.

Even after blood tests confirmed the pregnancy, she was terrified. The doctors were worried it was ectopic, and watched her like a hawk. For 13 weeks, she had weekly scans. The dreaded scan room slowly became a place of light as they saw their baby’s heart beating week after week. But they didn’t tell anyone. So much could go wrong. After the routine 20-week ultrasound, Julie’s heart finally started to flutter with excitement. Perhaps she would finally hold her own child in her arms.

As improbable as reaching this point was, her pregnancy was typical, but due to a calcifying placenta, a caesarean was scheduled for her 37th week. As little Benjamin Natanel was placed in her arms, tears of joy streamed down her cheeks. 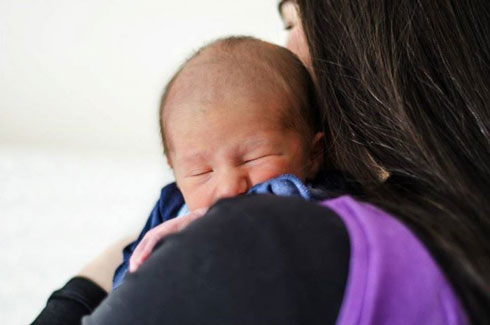 Benjy with his mother.

As the African sun peeked through the horizon on Simchat Torah the following year, Julie pushed two-month old Benjy to shul. Watching Adam cradle him under the tallit with all the other children, she was overwhelmed with gratitude for God’s kindness.

Until now Julie had always observed Jewish law, but it was an intellectual and distanced relationship. She did not believe that she was worthy enough of God’s love for Him to get involved in her life directly. With Benjy’s birth she now sees God’s involvements in every aspect of her life. She does not know why she had to go through so much pain, but is a witness to the fact that it is only God who runs the world, and that each life is created is a miracle.

*The names used in this article have been changed to protect the couple’s privacy.

1 Teratomas are tumours containing abnormal tissue, which usually are benign.