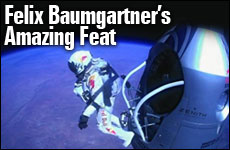 Lessons from breaking the speed of sound.

On October 14, 2012 Felix Baumgartner rose in a helium balloon to an altitude of 128,100 feet, and in a highly specialized space suit broke the world record by jumping and reaching a maximum speed of 833.9 miles per hour, or Mach 1.24.

"Trust me,” Felix said after the jump, “when you stand up there on top of the world, you become so humble. It's not about breaking records anymore. It’s not about getting scientific data. It's all about coming home."

As millions watched the daredevil jumper exit his capsule and gaze at the earth, the RedBull Stratos project was actualized. It took five years of preparing for this mission, and the project involved 300 people including seventy engineers, scientists and physicians.

Felix had to be in "aerodynamic" shape in order to break the sound barrier; throughout the free fall he had to constantly stabilize his body into a headfirst position. This took so much concentration that Felix remarked that he didn't even notice the sonic boom when he broke the sound barrier.

What can we learn from this?

The first message that hits me is the incredible amount of planning we are capable of when focused on a goal. There is no limit to the time, the money, the team work. Felix’s team involved experts from a wide range of fields from medicine to meteorology to psychology. But the most amazing member was the previous record breaker, Joe Kittinger, an 84-year old retired Air Force colonel. It was his calming voice from mission control that guided Felix through the ascent to the stratosphere. Instead of wanting his record to remain unbroken, Kittinger became an integral, inspiring mentor to the next generation. He passed on the torch, wanting mankind to go further and faster than he was able to go.

We see what a team can do when each member is focused on the goal instead of his own ego. Watching the expression of joy on Kittinger's face when Felix landed was beautiful. If only I could be that selfless for someone else's success.

And there's another lesson I took from this. For the past decade, the positive psychology movement has been telling us that practice and perseverance matters more than innate talent and strength. There is a trait called "grit" that Wikipedia defines as "an individual's passion for a particular long term goal coupled with a powerful motivation to achieve their respective objective." Clearly, Baumgartner has 'grit' as evidenced by his years of training and focus on breaking world jumping records. But there's more to grit. It also involves one's ability to continue to get up no matter how many times he falls. To wipe off the mud and the frustration and decide to keep persevering despite the myriad obstacles that can and do appear.

For instance, during the training for this mission Felix discovered that despite his fearlessness of heights, he had to face a new, unexpected fear in his tiny capsule: claustrophobia. He was so afraid of the closed, tight quarters of the capsule that in 2010 he left the United States and almost gave up entirely. But he didn't. And then during the second hour of the ascent, Baumgartner's visor began fogging up and continued to be blurry into his leap in space. Despite the terror, which we cannot possibly comprehend, Felix did not give up and use the high tech drogue chute that would have slowed him down, preventing him from breaking the sound barrier.

When the road is not always clear, when we’re afraid and feel completely lost, there is a way to keep going. God gives each of us this power inside of us to jump even when our visors are blurry, to stay focused even when we are frightened to make that final leap towards our goal.

My daughters and I once did a freefall from the SkyCoaster in Superland, Israel. That was 165 feet in the air, and when we had to release the latch and fall straight towards the ground, there were two thoughts that raced through my mind. There was no way down except to fall. And secondly there is nothing more frightening than the complete loss of control. For Felix, it was a bit different (besides the difference of around 127, 935 feet) because he had to work the entire time at stabilizing his body so that it would be aerodynamic. We were just free falling, but there is something about flying straight towards the ground that is innately humbling. The sense of freedom is exhilarating, and the vulnerability so terrifying.

I also discovered in that short free fall that no one ascends or descends to such heights without praying. Even a daredevil prays. That’s what Felix was doing on his climb up into the stratosphere.

But I think the most powerful lesson of all is in Felix's own poignant words after the jump. "It's all about coming home." Stronger than our need to jump, more powerful than our yearning to fly is our inherent connection to the preciousness of life. We all want to come home, to connect to those we love and to God who gives us the courage to jump past the edge of our fears.

Focus on the goal. Keep training. Jump even when your visors are all fogged up. Pray for strength. Pray for courage. And pray for Him to bring you home.

Don’t Give Up the Fight

Breakfast with Tzvi: Winning the Race

Cry Baby
Should I Break Up, Get Engaged or Keep Dating?
Time Is Your Precious Commodity
A Constant World in Flux
Comments
MOST POPULAR IN Spirituality
Our privacy policy