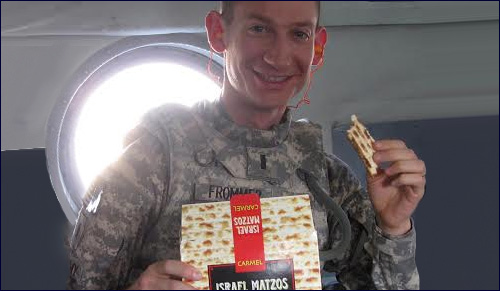 Two women are mobilizing the troops to nourish, physically and spiritually, Jews in the U.S. armed forces.

For the past eight years Jewish members of the armed forces of the United States stationed all over the world have what they need for the Jewish holidays thanks to the remarkable efforts of Sara Fuerst and Ava Hamburger, and their KosherTroops organization.

What started as a bat mitzvah project in 2008 has taken on a life of its own. Sara's daughter had been looking for something special and meaningful to do in advance of her bat mitzvah celebration. As it was around the holiday of Purim, Sara came up with the idea to make Purim baskets for Jewish soldiers. She made several calls and gathered 150 names.

They enlisted the help of family and friends and put together baskets for all 150 and mailed them out thinking that was that.

Suddenly she began to receive responses from happy and grateful troops. She had no idea their little bat mitzvah project was going to make such an impact. As Passover was just a few weeks they decided to send packages again. And then once more for Shavuot. At that point the momentum kicked in and Sara realized that they were filling an important hole that no one was filling. Sara enlisted her friend and neighbor Ava Hamburger and KosherTroops was born.

The mission of KosherTroops is to help improve the morale of members of the armed forces and show appreciation. They are sent holiday care packages that give them not only food but a warm connection to the Jewish community. "We want them to know that they are not forgotten," Sara says. 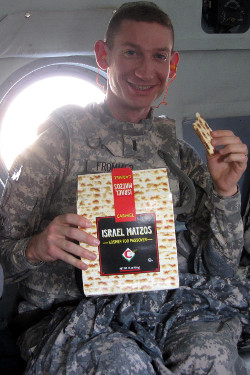 Of course the food is important too. For most of us it’s hard to imagine a Passover Seder without any access to kosher food, kosher meat, matzah and macaroons. But for many Jews deployed in the military the only Passover caterer available is KosherTroops.

There are approximately 5,000 Jews in United States military stationed in places like Afghanistan, Iraq, Germany, Pakistan, Kuwait, Korea, Africa, Honduras, and Alaska, as well as the military bases in the U.S. The military orders each Jewish service member a small Passover kit, that includes a meat meal, matzah, a Seder plate and grape juice. But for the full Seder experience and to keep kosher for the entire week of Passover, Jews in the military rely on volunteer support services like KosherTroops. 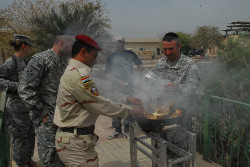 Burning chametz at base camp.

In many military posts the United States Defense Commissary Agency operates commissaries that are similar to supermarkets, providing service members with a way to order items available in the U.S. Unfortunately, it doesn’t always work out as planned... Like this doozy reported by Army Chaplain Rabbi Shlomo Shulman: “The new manager assured me over the past few months that he’d ordered plenty of matzah. Well, it turned out he’d ordered a whole bunch of matzah meal as well as “matzahrella” cheese, but no matzah. Koshertroops came through with a matzah shipment that supplied the Jewish servicemen and women in Grafenwohr, Germany with matzah for the whole week!” 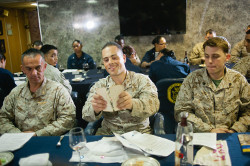 From the responses they get from soldiers, it seems that they are truly accomplishing what they set out to do. Like Lt. Col. David N. Rosner USMC who wrote, "KosherTroops not only fed me physically but also spiritually. The work they do is so meaningful. You find yourself alone in the desert or obscure base and your soul longs for connection to your essence. KosherTroops feeds that desire..."

This year they'll be sending out at least 900 packages for Passover to such far-flung places as Iraq, Kuwait, Japan and Germany. This huge undertaking requires thousands of pounds of food and many volunteers to put it all together. Many have stepped up to the plate to help. Companies such as Streits, Kedem, Manischewitz and Osem have donated food. The warehouse space is donated. And volunteers of all ages and every walk of life give of their time and energy to prepare the packages for shipment. 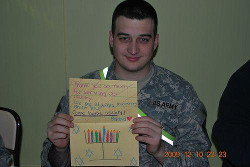 An extra touch is the beautiful notes and cards written by the volunteers and by school children which are included in each package. The messages of love and support are heartwarming to be received, but are also teach a valuable message to the children writing them about appreciating the servicemen and women who risk their lives for all of our liberties.

Finally, there are those service members for whom the KosherTroop packages are truly a lifeline for their religious observance. Perhaps this can be best summed up by what Lt. Simpkins wrote: 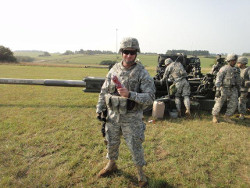 Lt. Simpkins with a kosher salami.

"Kosher Troops was a lifesaver for me. I started keeping kosher in Afghanistan and supplies didn't come very often to a combat outpost where I endured three months of my 10 month deployment. I actually ate nothing but protein shakes and M&Ms for two months. Thanks to the KosherTroops Passover shipment, my life was a lot better and it was possible for me to keep mitzvot. After I returned to my duty station in Germany, I was certain life would be easier and it was. Life was easier, but after a year and a half on kosher chicken and some limited dairy options, I dreaded the mealtimes. I literally cried tears of joy whenever I got a care package from KosherTroops. To feel that support from so many volunteers boosted my morale and reminded me why I signed up in the first place. I would hate to imagine how hard life would have been without them.”

Laura BenDavid is a writer, photographer and pro Israel social media activist. Formerly the head of social media at Nefesh B’Nefesh, she is now a sought after marketing consultant and director of marketing & new media at Shavei Israel. Originally from Monsey, New York, she made Aliyah from Boca Raton, Florida in 2002. Laura is the author of the book, MOVING UP: An Aliyah Journal, a memoir of her move to Israel, as well as numerous published articles both in print and digital media; her subjects of choice include Israel, Aliyah & social media and sometimes all three at once.

Carrying the Torch: The Menorah and the Eternal Jewish People

Hope in Hell
The Blue Beyond
Great Place to Live
Is Eating Supposed To Be Spiritual?
Comments
MOST POPULAR IN Israel
Our privacy policy