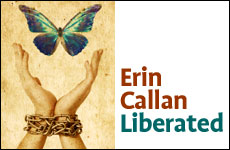 Callan was a slave to Lehman Brothers and her career. What are you enslaved to?

The web is all atwitter (in the original meaning of the word) about work-life balance, especially for women. (This always puzzles me slightly; isn’t it an issue for men also? But that’s for another time…)

Many prominent women have jumped into the fray, including Sheryl Sandberg of Facebook and Princeton Professor Anne-Marie Slaughter, formerly the director of policy and planning for the US State department under President Obama. The latest voice in the debate is that of Erin Callan, former CFO of the now-defunct Lehman Brothers (NY Times, 3/10/13).

Callan seems to me the most honest voice yet. She makes no pretense of being able to “have it all.” She offers no dream of government-sponsored day care or other programs that would support working mothers and allegedly resolve this issue. She doesn’t blame society or sexism. There’s no talk of glass ceilings and paving the way for others.

Instead she presents a sort of mea culpa. Basically she acknowledges that she blew it. She was the one who had her priorities backwards. “Work always came first, before my family, friends and marriage – which ended just a few years later.”

She was the one who was compulsive. She was the workaholic. And she paid the price – losing her first marriage, perhaps her opportunity to bear children, and who knows what other psychological and emotional costs.

But we can be grateful to Ms. Callan for holding up her own character flaws to the light, for allowing her experience to be a cautionary tale for the rest of us – if we would only pay attention!

Erin Callan makes another interesting point in her piece, “I didn’t start out with the goal of devoting myself to my job,” she writes. “It crept in over time. Each year that went by, slight modifications became the new normal. First I spent a half-hour on Sunday organizing my e-mail, to-do list and calendar to make Monday morning easier. Then I was working a few hours on Sunday, then all day. My boundaries slipped away until work was all that was left.”

What struck me so forcefully about this point is the similarity to the Passover story of the Jews in Egypt (You’ll see, I’m really not stretching the point!).

Slavery didn’t begin overnight, in one fell swoop. It never does. It started gradually – with a few extra tasks, a little less pay, some restrictive laws – until it finally became a full-fledged bondage (notice the parallel to the situation of the Jews in pre-WWII Germany). And then it was too late. No one person and no one nation sets out to be a slave – not to our jobs, not to other nations, not to our financial needs or even to our diets (or lack thereof)…

It happens gradually. The boundaries just get more and more blurred. We don’t even notice it happening.

Ms. Callan was given a little help from outside. The collapse of Lehman Brothers forced her to re-evaluate. Luckily she didn’t just jump in to more of the same. She had the presence of mind and the self-awareness to step back and take a look (I assume the demise of her first marriage also served as a catalyst for introspection).

And, in her understanding, are lessons for all of us.

Just as Erin Callan was a slave to Lehman Brothers, to her career, to job advancement, to power and honor, so too are we. And if those aren’t our challenges, we certainly have others. We’re enslaved by people’s opinions and expectations. We’re trapped by the desire for status and respect. We’re caught up in the pull of our material possessions (our homes, our vacations, our cars) and desires. We’re slaves to our personal trainers, the gym, organic food, shopping, television shows, sports teams…the potential list is endless.

Ms. Callan was lucky enough to break free from her enslavement, from her upside-down value system. She now knows that family supersedes work – and has the wisdom and experience to act on that knowledge.

But she hasn’t yet achieved the most essential freedom of all. “Tell Pharaoh,” the Almighty says to Moses and Aharon, “to let My people go – so that they may serve Me.”

When we free ourselves from all that entraps us, all that stands between us and a full relationship with our Creator, only then will we have truly burst the shackles of slavery. And only then will we be able to fully actualize the potential of our freedom.

Physical freedom is the first step – for individuals and for our nation. But we have to keep moving. This Passover, this time of renewal, is an opportunity take the next steps towards spiritual freedom as well.