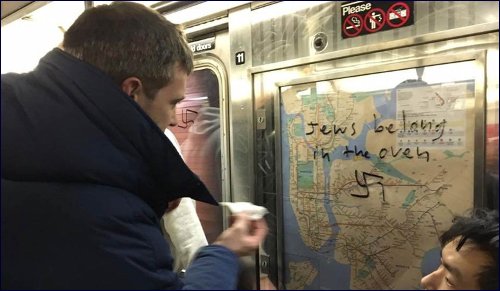 An exclusive Aish.com interview with the man who took action.

Jared Nied, a chef in New York City, is being hailed a hero for inspiring a subway car full of passengers to erase anti-Semitic graffiti from the train. In an Aish.com exclusive interview, he describes how he was able to inspire a car full passengers to come together to “erase hate”.

On Saturday night, February 4, 2017, Jared was leaving work as a chef in a downtown restaurant. He boarded the No. 1 New York City subway heading uptown and saw that his car was covered with anti-Semitic and racist graffiti. Someone had used a Sharpie permanent marker to draw swastikas and slurs. “Jews belong in the oven,” “Heil Hitler”, and swastikas covered the maps, windows and some of the ads.

Gregory Locke, a passenger who got on at 50th Street, described the scene: “I got on the subway in Manhattan tonight and found a Swastika on every advertisement and every window” he later wrote on Facebook; “The train was silent as everyone stared at each other, uncomfortable and unsure what to do.” https://www.facebook.com/gregoryalocke 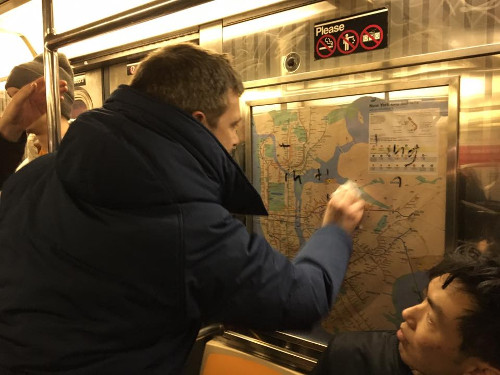 Jared recalls “I sort of sighed to myself and looked around and everyone was clearly upset: the whole car was covered.” He thought of what to do, and decided to share the shocking scene on social media. Taking a photo of calls to “Destroy Israel” and “Heil Hitler”, he posted it along with the comment “Sitting across from this...stay classy, New York.” He intended to let people know what had happened.

Just then, a woman sitting across from Jared noticed his stricken face. Sensing that he was looking for some way to help, she met his eye and commented “Oh, this is awful. Do you think you could erase this?” 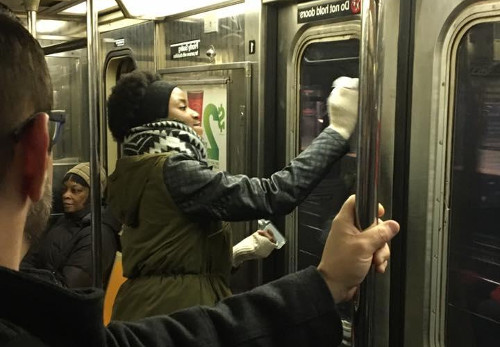 Jared pointed out that it was permanent marker and might not come off. “That’s when it hit me: alcohol would take it off.” Jared stood up and addressed his fellow passengers. “Hand sanitizer gets rid of Sharpie. We need alcohol.” Passengers eagerly dug into bags, searching for hand sanitizers. Within moments, about ten people offered their bottles.

Taking a tissue, Jared started scrubbing. To his relief, the offensive graffiti came off. Soon other passengers leapt up and started scrubbing the car clean. “There were about four or five of us actually cleaning the car,” Nied recalls. “Everyone else helped as well as they could. When I say the car was covered, I mean covered: it was on all the maps and on all the door windows… People were pointing, saying ‘Could you get this one?’, ‘Did you get this one?’”

“I’ve never seen so many people simultaneously reach into their bags and pockets looking for tissues and Purel,” Gregory Locke posted. “Within about four minutes, all the Nazi symbolism was gone.”

“We all just sat back down,” Nied recalled, “glanced at each other, and went about our ride much happier. There was a really contented quiet in the car.”

Gregory Locke posted pictures of the car-wide cleanup on Facebook, where it quickly went viral, garnering hundreds of thousands of comments and shares within hours. 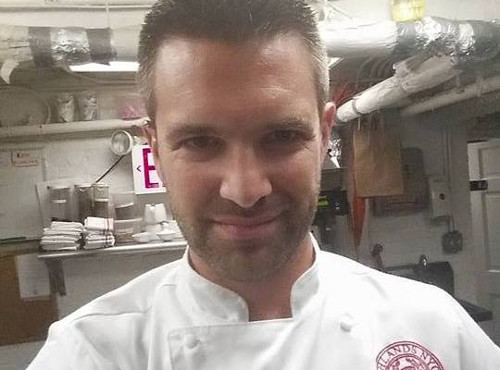 After news of his deed went viral, Jared wrote “...never in a million years did I think anybody would record my moment, let alone that it would explode like this… I was just doing the right thing, the thing that needed to be done…. My mom raised me to care beyond words, and my dad made me into the man who can put that care into action…. I hope, in some small way, I can teach the world how to be better.”

“I think I see things a little differently now,” he explained to Aish.com. “It would have been just as easy to stare at my phone and block everything out and retreat into a little bubble and give up and kind of say ‘the world is an awful place.’” Instead, he’s grateful the woman sitting opposite spoke to him, encouraging him to move out of his comfort zone and act. “I think it shows that you don’t need elaborate plans.” Coming together enabled the passengers on the train to accomplish what one person alone might have been unwilling or unable to do.

Hillel taught, “In a place where there are no leaders, strive to be a leader”. In a small, beautiful way, the passengers on New York subway No. 1 reminded us that we each can stand up and act when we see injustice and evil, and rally others to help us do what’s right. 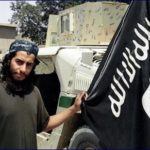 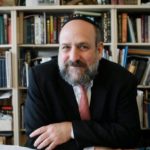 Michael Schudrich: Rabbi to Poland’s Jews, the Living and the Dead13 min read 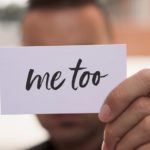 The #MeTooMovement: When Men are the Victims4 min read

How I Suddenly Became a Dangerous Person1 min read