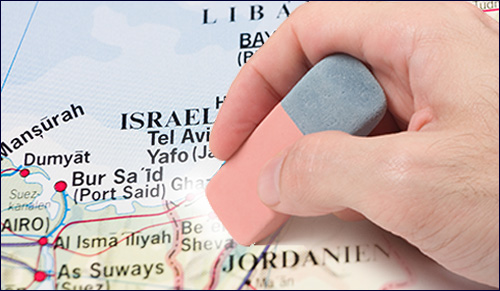 HarperCollins’ map expunging Israel is only the latest example of the quest to rewrite history without the Jewish state.

Publishing giant HarperCollins began 2015 by publicly apologizing for selling maps of the Middle East that omit Israel. The company insisted that erasing Israel from maps were necessary since displaying the reality of Israel’s existence would be “highly offensive” to their customers in the Middle East region. The Israel-scrubbed maps were simply reflecting “local preferences”.

Visitors to Jerusalem today can pray at the Western Wall, the last vestige of the magnificent Jewish Temple that once stood on that site, until its destruction by Roman forces in 70 CE. Archeological sites in the area have unearthed remains from the Temple, including the remains of a bridge that led to the Temple, pottery, ritual baths and engravings.

In the face of extensive historical and archeological evidence, it would seem impossible to deny the history of the Temple Mount – yet, incredibly, for years the Palestinian Authority has been committed to doing just that: erasing any trace of Jews’ connections with Judaism’s most holy site.

US negotiator Dennis Ross recalls that in 2000, in the midst of US-brokered peace talks between Israel and the Palestinian Authority, Palestinian leader Yasir Arafat raised only one idea: that there never was a Jewish Temple in Jerusalem. “I will not allow it to be written of me (in history) that I have…confirmed the existence of the so-called Temple underneath the mountain,” Arafat insisted to various shocked diplomats. Current Palestinian Authority President Mahmoud Abbas concurs, declaring that Jews “cannot come and claim” there ever was a Jewish Temple on the Temple Mount in Jerusalem.

The Islamic Waqf has destroyed many of the irreplaceable archeological objects documenting an ancient Jewish presence on the Temple Mount.

Under cover of “renovating” the Temple Mount, Waqf workmen have used heavy machinery to dig up areas containing highly sensitive, ancient objects. As far back as 1982, United Nations labeled the Temple Mount an “endangered” historical site due to the wanton destruction of Jewish artifacts, and the situation has only worsened over time.

In 2007, Ira Pasternak, an official of the Israeli Antiquities Authority, was permitted to view work on the Temple Mount; what he saw shocked him: huge tractors were used to dig up a floor, exposing ancient treasures, which were then tossed away into a garbage dump. Since 1996, the Waqf has built two new mosques in subterranean areas of the Temple Mount, including one in Solomon’s Stables. Pipes and other construction elements were drilled into ancient stones, and Jewish decorations thousands of years old were painted over.

HarperCollins’ maps are not the only educational materials to delete any mention of the Jewish state.

Children attending schools run by the Palestinian Authority are routinely presented with books and maps that deny the existence of Israel; one 12th Grade textbook is typical in referring to “the so-called State of Israel”, and accompanying the lesson with a map depicting all of present-day Israel wrapped in a Palestinian flag and pierced by a key, symbolizing ownership. Children’s television programs reinforce this message: the Palestinian Authority’s educational program Best Home teaches kids “there is no such thing as Israel”. Hamas’ Tomorrow’s Pioneers kids’ TV show instructs “There is no Israel; only Palestine”.

The problem isn’t confined to Palestinian media. In 2013, it emerged that an English-as-a-second-language textbook published in Britain – and praised by the Duke of Edinburgh as “extremely well-planned and constructed” and very impressive – contained a map that labeled all of Israel “Occupied Palestine”, erasing the Jewish state entirely.

Even when Israel’s existence is acknowledged, it’s often to create a negative impression. One recent study found that fully 84% of references to Israelis in all textbooks used by the Palestinian Authority are derogatory in tone; the same study revealed that a common goal advocated in both Palestinian Authority and Muslim schools within Israel is “martyrdom-sacrifice through death”.

When Israeli Arab (and citizen) Haitham Khalaily made the semi-finals of “Arab Idol” – a spinoff of the popular “American Idol” TV franchise – in October 2014, he was described not as Israeli, but Palestinian, by the contest organizers, despite his citizenship and residence in the Jewish state. Few people commented on this silent erasure of the word “Israeli” – until that dreaded term was used live on Saudi Arabian TV: a map on Saudi Arabia’s MBC TV network showed (correctly) that Khalaily is from Israel; viewers flooded the station’s phone lines, demanding an apology and threatening a boycott. MBC quickly backed down, blaming the use of the word Israel on air on a “technical error”, and reverting to their usual Israel-free programming.

Even in more liberal countries, realistic depictions of the Jewish state can be branded offensive. In 2012, Britain’s Advertising Standards Authority nixed an Israeli Ministry of Tourism ad: although Israel’s borders were clearly delineated, the Authority worried customers might gain the impression that Israel controlled disputed territory; they also objected to the use of the Hebrew terms “Judea and Samaria” instead of the English “West Bank”.

For some, the very term “Israel” is anathema: at their annual conference in June 2014, the Presbyterian Church considered removing the word Israel from Church prayers. (The resolution was defeated, but a linked resolution – to divest from companies that deal with Israel – passed.)

The erasure of Israel can come in some surprising places. In 2014, the Holocaust Educational Trust Ireland banned any mention of the Jewish state – participants weren’t allowed to so much as utter the banned word “Israel” – from Ireland’s national Holocaust commemoration.

At times, removal of references to Israel is silent. Readers in areas of Scotland governed by the West Dunbartonshire Council near Glasgow might not realize why they cannot find books by Israeli authors, or books published in Israel, on their local library’s shelves: since 2011, their council has boycott all such books, and even advised other regional councils who are interested in doing the same.

What Can We Do?

HarperCollins apologized for its Israel-free maps and pledged to stop selling them in the face of stinging criticism. We each have a duty to stand up, not be silent, and protest when we see Israel unfairly maligned.

Why a Unilateral Declaration of Palestinian Statehood is a Bad Idea