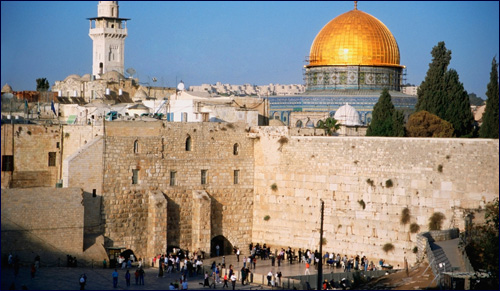 UNESCO, the UN's Education, Sciences and Culture Organization charged with protecting the world's cultural heritage, voted to single out the Jewish state for censure at an annual meeting in Bonn, Germany last week. Their bizarre criticism (including criticizing handicapped-accessible amenities like an elevator in Jerusalem's Old City) is completely divorced from reality.

Dore Gold, Israel's Foreign Minister Director General, called UNESCO's new resolution "completely one-sided" and "full of distortions from reality on the ground": "As the historical heritage sites of this area are being systematically destroyed by Jihadist forces, such as the Islamic State of Syria and Iraq, UNESCO's adoption of utterly false allegations about Israeli archeological practices is misplaced and hypocritical, at best."

Many of the projects UNESCO denounces are patently ridiculous. Jerusalem's Light Rail public transportation system was praised when it opened for uniting the city, carrying passengers on state-of-the-art trains throughout Muslim and Jewish areas. The archeological sites it lambasts have painstakingly documented thousands of years of history – uncovering Jewish, Christian and Muslim relics and artifacts.

UNESCO calls the Western Wall Plaza where thousands of Jews as well as others gather to pray each day by its Arabic name "Buraq Plaza" instead. The resolution refers to archeology carried out throughout Jerusalem as "illegal excavations and works conducted by the Israeli occupation authorities and the extreme settler groups in the Old City of Jerusalem and on both sides of the walls" – apparently denying any Israeli legitimacy, anywhere.

While UNESCO was voting on the Israel-bashing resolution, CNN became the latest organization to mistake UNESCO for a serious agency. An article titled "Last Chance to See: 25 Magnificent Structures on the Verge of Extinction" placed Jerusalem's iconic Dome of the Rock mosque at the top of the list. When it was pointed out that far from being threatened the Dome of the Rock is thriving, CNN explained their error by pointing out Jerusalem's Old City has been on UNESCO's list of endangered sites for the longest. (Giving into pressure from Jordan, the agency placed Jerusalem on its list of endangered sites in 1982 and has remained there ever since.)

If UNESCO were truly interested in doing its job of ensuring the integrity of Jerusalem's holy sites, there are plenty of other problems they could critique.

Take access to the Temple Mount, a major UNESCO criticism. Ironically, while UNESCO was voting to pillory Israel for restricting access, Israeli authorities were making arrangements for extra busses to transport Muslims from the West Bank into Israel to pray in the Al-Aqsa Mosque there and to ban Jews from the Temple Mount for the remainder of Ramadan. (This wholesale restriction of one particular ethnic group passed unremarked by UNESCO, which apparently approves of some restrictions on access to this holy site so long as the targets are Jews.)

UNESCO could also weigh in on the routine harassment of Jews who do visit the Temple Mount. On April 16, 2015, The New York Times documented what it described as the "routine" threatening of Jewish visitors by groups of Muslim women at the holy site who shout that Jews are apes and pigs and chase them, threatening bodily harm:

If UNESCO doesn't want to criticize anti-Semitic threats at one of its listed sites, perhaps it could criticize some of the truly damaging excavations that have taken place in Jerusalem's Old City instead.

Take the massive destruction of priceless archeological treasures on the Temple Mount by the Waqf, the organization that oversees the Muslim holy sites. In 1996, the Waqf converted the ancient structure Solomon's Stables in the Temple Mount to a mosque, installing new floors and lights directly into the ancient building. Three years later, the Waqf gained approval to create an emergency exit for this and other Muslim buildings.

What was meant to be a limited new addition turned out to be a massive destruction of ancient artifacts on an almost unimaginable scale. Working round the clock, the Waqf built what the Smithsonian Magazine, documenting the destruction, called "a massive vaulted entryway" instead. Using bulldozers, they dug a pit over 131 feet long and 40 feet deep. Trucks carted away hundreds of tons of debris, laden with ancient artifacts.

Eyal Meiron, a historian at Israel's Ben Zvi Institute, described the destruction: "That earth was saturated with the history of Jerusalem... A toothbrush would be too large for brushing that soil, and they did it with bulldozers".

The Waqf's chief archeologist, Yusuf Natsheh, dismissed any Jewish interest in the site. "Every stone is a Muslim development...if anything was destroyed it was Muslim heritage," he said.

Israeli archeologists started systematically going through the debris and found major artifacts: 3,000 year old carved scarabs that were either Egyptian or of Egyptian design, and a 2,000 year old coin from the Jewish Great Revolt against Roman rule that was inscribed "Freedom of Zion". So far about half the artifacts having been documented.

As Israel continues to conduct responsible excavations and works hard to ensure access to balance the needs of the worshippers and visitors to Jerusalem's many sites, it deserves UNESCO's praise and support, not spurious criticism.

What You See When Looking At the Wall