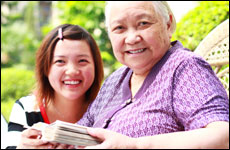 For American parents it’s very often no more than a fantasy, but it’s now the law in China.

Chinese authorities were dismayed that the ancient tradition of reverence for the aged and filial respect for parents was starting to diminish. They considered it a threat to the spiritual core of their society. And so they took startling action.

As reported recently in the New York Times, the Beijing government enacted a law compelling adult children to visit their aging parents. The law, called “Protection of the Rights and Interests of Elderly People,” lays out the duties of children and their obligation to provide for the “spiritual needs of the elderly” in nine specific clauses. Children are required to go home on a frequent basis to see their parents as well as to regularly send greetings and inquire about them. More, to ensure compliance, companies are urged to give their employees enough time off so they can make parental visits.

Officials in a northern Chinese County have gone even further. Leaders are refusing to promote people unless they show sufficient filial piety, hoping they will set a good example to other citizens. Assessors quiz parents, in-laws and spouses about how well they are treated. Complaints from disgruntled relatives are enough to veto a promotion. "If we want to help the public have filial piety, officials should take the lead," said Qi Jinghai, party secretary of Weixian county in Hebei province. He said he believed in the Confucian teaching that filial piety came above other virtues and that those who do not care for their parents cannot be trusted with public affairs.

Granted, these efforts, infringing on personal liberties and imposing legal restraints on private behavior, seem discordant to our democratic society. But they put into sharp focus a troubling aspect of our contemporary culture that has created a climate of indifference, intolerance and often antipathy to the aged. Sociologists have given it a name: ageism. It is the derogatory stereotyping of the elderly, the one form of prejudice overlooked by today's guardians of political correctness even though it takes a far heavier toll than any other form of discrimination.

It is limited to no specific group; eventually everyone becomes its victim merely for the sin of survival.

Americans worship youth. The Botox generation wants above all to conceal the indicators of age and to camouflage the signs that betray the passage of years, an unrealistic denial of reality which sociologists Taves and Hansen have labeled “the Peter Pan syndrome.” Grandmothers in their eighties persist in calling each other "girls" and try to dress accordingly. Elderly men refer to themselves by the self-demeaning descriptive "boys" and indulge in immature behavior far more appropriate to teenagers to better comply with contemporary values.

Getting old today is almost considered a sin. And with that comes disdain for the wisdom, the learning and the experience of the elderly as well as the gratitude that ought to be their due for all that they have given to the next generation.

Contrast this with the remarkable story the Midrash teaches about the way in which old age was first introduced into this world. The Bible says, "And Abraham was old, stricken in age" (Genesis 24: 1). Previous to this, no one had ever been spoken of with this descriptive. From this the rabbis infer that God introduced old age to the world in response to a special request from our first patriarch. Abraham came before the Lord with a plea. “Master of the Universe, a man and his son walk together and no one knows unto whom to give honor. I beg of you, make a distinction between us.”

Judaism deals with the problem of age by granting it status. American culture copes with it by denying its existence.

In the traditional Jewish view, old age was not a curse but a positive response from God to a human appeal. It answered a need. How else would people know whom to honor? It is God's gift of a visible badge of identification to those who deserve the honor age ought to inspire.

Judaism deals with the problem of age by granting it status. American culture copes with it by denying its existence. In the implicit absurdity of this latter approach lies the reason for its inevitable failure. Peter Pan is a fairy tale; respect for age from others, leading to self-respect, is the only viable alternative.

The Jews and the Chinese, two of the world’s most ancient surviving cultures, share this passion of respect for the aged. Lin Yutang, in her classic work The Importance of Living, perceptively pointed out, “I have found no differences that are absolute between Eastern and Western life except in the attitude toward age. In China, the first question a person asks the other on an official call is: ‘What is your glorious age?’ If he replies apologetically that he is twenty-three or twenty-eight, the other generally comforts him by saying that he still has a glorious future, and that one day he may become old. Enthusiasm grows in proportion as the gentleman is able to report a higher and higher age, and if he is anywhere over fifty, the enquirer drops his voice in humility and respect. People actually look forward to the celebration of their fifty-first birthday.”

The Torah describes the special role assigned to the elderly: “Ask your father, and he will declare unto you, your elders, and they will tell you” (Deuteronomy 32:7). Opportunities to learn from those who have accumulated the wisdom of life were meant to be treasured.

Because we fear the process of aging we distance ourselves from the elderly, and their accumulated wisdom of personal experience. To downgrade and disregard our most important living natural resource is to deprive ourselves of innumerable benefits. We rob ourselves the opportunity to learn from those most fit to teach us. We omit a sense of ancestry, history and roots, and so lose a valuable understanding of ourselves.

The Chinese, as we’ve seen, have chosen to incorporate this concept into law. Jews have a more powerful way to achieve the same end.

The biblical verse dealing with our special responsibility to the elderly reads: “You shall rise up before the hoary head, and honor the face of the old man, and you shall fear your God: I am the Lord” ([Lev. 9: 32). Why, the rabbinic commentators ask, does the verse conclude with the words "I am the Lord”? Because God's greatest concern is that in dealing with the helpless elder, "One may shut his eyes as though he has not seen him" (Kiddushin 32b ). Therefore man is reminded, "I am the Lord" – who knows not only the deed of the hand but also the neglect of the heart.

For Jews, it is far more than the law of the land – it is a fundamental law of God’s Torah.

How Rabbi Sacks Changed the Life of This Soviet-Bred Mother

Can We Ever Unplug?

The Death of Terri Schiavo: An Epilogue
The Grand Mufti of Jerusalem and the Holocaust
The Connection between Israel and the Jewish People
Grit and Torah
Comments
MOST POPULAR IN Society
Our privacy policy