Eavesdropping on the Subway 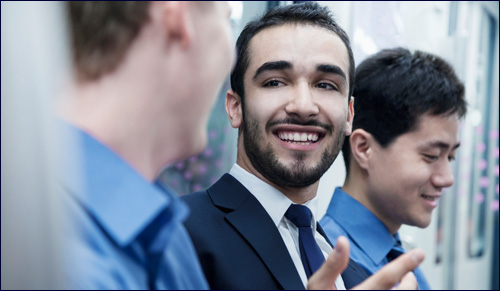 I could not believe what I was hearing.

I spent a lot of time on the subway this past week and in restaurants. In addition to the opportunity to travel quickly and to eat in new places, this experiences afforded me the chance to engage in another favorite pastime – eavesdropping. I don't want to go into a whole exploration of what psychological factors motivate such activity – boredom with our own lives, living vicariously, fantasizing about the exciting lives of others (the corollary to point one) etc. – but I do want to share one item that I overheard.

It didn't involve any juicy information but it was illuminating. Two business colleagues were having a rather loud conversation right in front of us. They made no effort to keep their voices low and were obviously unashamed of the content of their dialogue. It wasn't about new innovative ideas to move their company forward. It wasn't about creative business strategies or the latest managerial techniques. Rather it was all about their co-workers – who was late and why, who was too bossy, who didn't work well with their team, and even whose marriage was in trouble. I was a little taken aback by the unabashed nature of their words. Finally the older man, seemingly a mentor to the younger one, came right out and acknowledged his goal: "I just wanted to get the gossip," he explained.

The younger man, unfazed, proceeded to fill in the blanks to the best of his ability. Neither one batted an eyelash as the conversation continued unhindered. But I was shocked. How could they not be embarrassed? It's not that I think that the conversation would be more appropriate were it to take place in a more private setting or more subdued tone of voice, it's just that the tone and environment indicated complete lack of awareness that there was anything wrong with what they were doing and saying.

The desire to spread gossip and/or listen to gossip certainly exists within each and every one of us. Who doesn't love some juicy tidbits? But I guess I thought that there was still some recognition of the damaging nature of such an enterprise, still some desire to be careful and circumspect, still some sense that if I'm going to behave in such a clearly wrong way, I would do in private because I'm still a little embarrassed by my predilection.

I am clearly wrong. No such concern seems to exist. This makes it even harder for those of us who are trying to hold our tongues or cover our ears. We get very little external support.

I have noticed with one friend of mine that if I cross the line and say something I shouldn't (yes, it's been known to happen!), my comment is met with total silence. That stops me in my tracks. She doesn't utter any words of rebuke. She doesn't need to. Her silence is enough. And I'm grateful (usually) because it actually means she has my back. She doesn't want me to make the mistake of speaking negatively about a fellow human being. And I don't really want to either – even though I may feel like it!

The experience on the subway brought me up short and made me realize yet again how lucky I am to live in a world that abhors and prohibits gossip. I almost felt sorry for the man on the subway who doesn't know how much better and deeper and richer his life could be.

And then I struggled not to hear the rest of the salacious story, even though I didn't know who they were talking about, because being involved in gossip, even as a distant bystander, is never truly harmless.

After the Car Accident

You've Got a Friend

The Gift of Torah
Scientific Curiosity and the Divine Encounter
Mind Over Milkshakes
Love the Convert
Comments
MOST POPULAR IN Family
Our privacy policy
Aish.com Is Looking for Great Writers