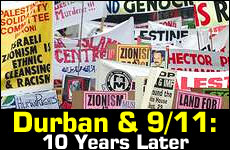 If 9/11 was the Kristallnacht of terror, Durban was the Mein Kampf.

It was said in the immediate aftermath of 9/11 that “the whole world changed.” I don’t know if the world is any different, but it is clear that 9/11 had a transformative impact on our politics and psyche.

But, if 9/11 was a transformative event, the same description applies to another event that ended on the eve of 9/11. I am referring to “The World Conference against Racism, Racial Discrimination, Xenophobia and Related Intolerance” in Durban, South Africa, which emerged as the tipping point for a new wave of anti-Semitism masquerading as anti-racism. Yet, the 10th anniversary of this event has gone largely unremarked.

As one of my colleagues put it at the time, if 9/11 was the Kristallnacht of terror, Durban was the Mein Kampf. Those of us who personally witnessed the Durban festival of hate – with its hateful declarations, incantations, pamphlets and marches – have forever been transformed. For us, “Durban” is part of our everyday lexicon as a byword for racism and anti-Semitism, just as 9/11 is a byword for terrorist mass murder.

When the World Conference Against Racism was first proposed, I was among those who greeted the news enthusiastically. This was to be the first world conference of its kind in the 21st Century. Anti-racism was finally going to be a priority on the international human rights agenda. The underrepresented human rights cases and causes, such as the Roma of Europe, would now have a platform and presence. The fact that Durban was chosen as host city was a commemoration of the dismantling of South African apartheid, itself a watershed event in the international struggle against racism.

A conference purportedly organized to fight racism was turned into a festival of racism against Israel and the Jewish people.

But what happened at Durban was truly Orwellian: A conference purportedly organized to fight racism was turned into a festival of racism against Israel and the Jewish people. A conference intended to commemorate the dismantling of South Africa as an apartheid state resonated with spurious calls for the dismantling of Israel’s as an apartheid state. A conference dedicated to the promotion of human rights as the new secular religion of our time increasingly singled out Israel as a sort of modern-day geopolitical anti-Christ.

How did this happen?

The problem originated with the Asian regional conference, held in Teheran in February, 2001. Although Israel belonged to the Asian group, the conference organizers excluded Israel and Jewish non-governmental organizations from participation. Contrary to the United Nations’ own principles with respect to universality and equality, a member state was made a pariah. The Teheran conference also supported a country-specific indictment of Israel, yet another breach of international human-rights principles and the UN’s own procedures in this regard.

The six-point indictment emanating from the Teheran regional conference, which became a dominant blueprint for Durban, has emerged as one of the more scurrilous documents relating to Israel and the Jewish people to appear since World War II.

The first specific indictment of Israel spoke of the occupation of the West Bank and Gaza as a “crime against humanity, as a new form of apartheid, as a threat to international peace and security.” While UN Security Council Resolution 1373, adopted in the aftermath of 9/11, would characterize terrorism itself as a threat to international peace and security – which no cause or grievance could ever justify – Teheran and later Durban would characterize terrorist acts against Israel as “resistance” to occupation, and since delegates at Durban saw “resistance” against apartheid states as eminently praiseworthy, Durban served to validate terrorist acts against Israel.

Second, Israel was accused of the “ethnic cleansing” of “Mandatory Arab Palestine” in 1947-48 – of being, in effect, an “original sin” in its very creation, though its international birth certificate was sanctioned by the UN Partition Resolution of 1947, which recommended the partition of then mandatory Palestine into two States – a Jewish State and an Arab State. The Jewish leadership accepted the Partition Resolution, while the Arab and Palestinian leadership rejected it, and launched, in their words, a “war of extermination” against the embryonic Israeli state.

Third, Israel was cast as being responsible for all the evils in the world, the “poisoner of the international wells,” the contemporary analogue to the medieval anti-Semitic libel. In this regard, the delegates at Teheran and Durban were very much taking their cues from the larger UN itself, where, on the occasion of the Teheran conference, the United Nations Commission on Human Rights condemned Israel – and Israel alone – for war crimes and crimes against humanity.

Fourth, the documents emanating from Durban introduced a new perspective on the notion of “holocausts,” intentionally written in the plural and in lower case. A large number of states even sought to minimize or exclude any references to the Holocaust, or to marginalize and ignore anti-Semitism, while holding up Israel’s treatment of the Palestinians as an example of a “real” holocaust. Zionism was characterized not only as “racism,” but as a violent expression of racist supremacy – indeed, as a form of anti-Semitism itself.

As it happens, all of this hateful Durban-speak became a legitimizing instrument for a new wave of anti-Semitism in the immediate aftermath of 9/11, as evidenced by the following examples:

1. The Jews were blamed for 9/11 in a set of new “protocols” reflective of what some see as a new international Jewish conspiracy. For example, in many Arab and Muslim countries, teachers, religious leaders and the media propagated the theory about the 4,000 Jews who supposedly had been tipped off to stay away from work at the World Trade Center, and the Jewish film crew that supposedly had advance notice to be on the scene to film the planes plowing into the Towers. Upon the fifth anniversary of 9/11, polls showed that some 50 percent of British Muslims believed 9/11 to have been an American-Israeli conspiracy.

Now, on the 10th anniversary of this horrific tragedy, these myths have resurfaced with a vengeance, with social media now the medium of choice for blaming Israel and Jews for 9/11. Copious Facebook groups such as “Jews Behind 9/11,” and “9/11 was an inside (ZIONIST) job” provide a platform for incitement and the demonizing of the Jews on this solemn occasion of remembrance.

3. A global campaign against Israeli “apartheid” was launched in the form of post-Durban calls for Boycotts, Divestment and Sanctions. In an astonishing but revelatory development at a pro-divestment conference in Michigan, just weeks after Durban, a resolution calling for a two-state solution “if Israel were to transform itself and become a real democracy” was defeated, but a resolution calling for the dismantling of Israel as a racist apartheid state was adopted.

4. The first UN Human Rights Commission meeting in the aftermath of Durban – not unlike the one on the road to Durban – sought to single out Israel for differential and discriminatory treatment, with 40% of all the resolutions passed at the meeting indicting Israel, while the major international human rights violators, such as Libya, Sudan, Syria or Iran, enjoyed exculpatory immunity. This Alice in Wonderland human-rights perversion continues to be replicated in the successor UN Human Rights Council.

5. The convening, in December 2001, of the Contracting Parties to the 1949 Geneva Conventions on international humanitarian law was a particularly egregious discriminatory act. For 52 years, the contracting parties had never met – notwithstanding the genocide in the Balkans, the unspeakable and preventable genocide in Rwanda and the killing fields in Sierra Leone. The first and to date only time that the contracting parties have ever come together to put a country in the docket was in the immediate aftermath of Durban. That country, again, was Israel, an offensive singling-out that undermined the whole regime of international humanitarian law.

Durban became the tipping point for the coalescence of a new, virulent, globalizing anti-Jewishness reminiscent of Europe in the 1930s.

In sum, Durban became the tipping point for the coalescence of a new, virulent, globalizing anti-Jewishness reminiscent of the atmospherics that pervaded Europe in the 1930s. In its “benign” form, it found expression in the singling out of Israel and the Jewish people for selective and discriminatory treatment; in its lethal form, this animus continues to find expression in the state-sanctioned genocidal anti-Semitism of Ahmadinejad’s Iran and its terrorist proxies, Hamas and Hizbullah.

None of this is intended to suggest that Israel is somehow above the law, or that Israel is not accountable to the international community like any other state. On the contrary, neither Israel nor the Jewish people are entitled to any privilege or preference because of the horror of the Holocaust or the threat of anti-Semitism. The problem is not that anyone should seek to place Israel above the law, but that Israel is being systematically denied equality before the law; not that human rights standards are applied to Israel – which they must be, but that they are not being applied equally to everyone else; not that Israel must respect human rights – which she must – but that the rights of Israel deserve equal respect.

On the tenth anniversary of 9/11 – a terrorist atrocity borne out of radicalism and hate – let us not overlook the racism and evil still prevalent today. Anti-Semitism – both old and new – is the canary in evil’s mine shaft. As history has taught us only too well, while it begins with Jews, it does not end with Jews. Combating racism, hate and anti- Semitism is everyone’s responsibility.