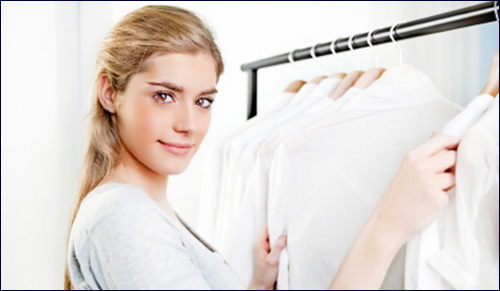 Is the gender gap partially a fabric gap?

I popped into a T.J. Maxx store today, hoping to score a fashion bargain or two. Shoppers like me who don’t like to reveal much skin to the public have our work cut out for us. Finding attractive and stylish clothing that doesn’t also compromise our dignity is like panning for gold in the Sahara Desert. When I saw a rack of itty-bitty pieces of fabric masquerading as “skirts,” I just stared at them. I have Band-Aids at home bigger than these garments.

I have Band-Aids at home bigger than these garments.

True, short skirts and barely-there women’s apparel are nothing new. Women have been baring their décolletage for centuries, and women’s legs became part of the public landscape decades ago. Ironically, during the past 50 years, as gender equality became highly valued in society, women’s fashions have continued to work against women being taken seriously.

Last spring, Facebook CEO Sheryl Sandberg was much in the news for her new book, Lean In, in which she encourages women to focus more on their careers than on family life. She also blames men for not doing more to promote women to higher positions in the workplace. It was fascinating to watch her tell a CNN interviewer that often, the more powerful a woman becomes at work, the less she seems to be liked or admired—a stark distinction from men, whose likability index usually rises along with his title.

Sandberg assumes that sexism is so ingrained in the workplace that women in authority become targets of resentment. But what if something else is going on? If we are allowed to observe that males sometimes demonstrate stereotypical behavior that needs correcting, such as a tendency to lewdness or over-aggressiveness, true equality demands that we should also be allowed to observe that females also sometimes display stereotypical behavior that needs correcting, such as cattiness and hyper-competitiveness for male attention. Is it possible that this sort of insecure, “mean girl” behavior might account for some women becoming less likable as they rise in authority?

A March 6, 2013 article in the Wall Street Journal titled “The Tyranny of the Queen Bee” by Peggy Drexler also noted the phenomenon of women in management positions who not only fail to mentor younger women, but sometimes actively undermine the efforts of those younger women to move up in the organization. But is this also the fault of men, as Drexler concluded, or are some women simply possessive of their turf? Everything that may go wrong for women cannot always be the man’s fault.

What does any of this have to do with short skirts? I am struck by how often women who are either public representatives of professional organizations, office managers, television journalists, or hold positions of mid-level responsibility or higher dress very provocatively. Tight-fitting jackets and short skirts, revealing blouses and spiky high heels are common in the professional world. At a professional women’s luncheon I attended, the mistress of ceremonies bared so much skin that I was actually disgusted. Her choice of clothing did a tremendous disservice to the cause of having women be taken seriously. And while the micro-mini skirts I saw at T.J. Maxx are not yet considered appropriate office attire, how long will it be until women’s demands to express themselves as they like lower the bar even to this level?

Women cannot have it both ways. If they choose to dress to arouse men, they make it less likely that they will be respected for their managerial astuteness, and no amount of “mentoring” by older, more experienced women in their fields will fix that. Women who dress in a competitively racy way in the office will find it’s more difficult to gain the respect of colleagues and foster the kind of collective team spirit so fundamental to a healthy work environment. Perhaps, at least sometimes, a career achievement gap may have something to do with a fabric gap.

Women have more choices and freedom than ever before in their educational and career opportunities. They no longer need to marry for economic self-sufficiency. They protest vociferously if they find evidence that they are being denied promotions due to their gender. Certainly, workplace discrimination still exists, though it is both obviously wrong as well as illegal. However, women continue to grow their ranks among CEOs of some of the biggest companies in the nation. Mary Barra has just been named General Motors’ first female CEO. Women are CEOs or VPs at Xerox, PepsiCo, JPMorgan Chase, Intel, Oracle, DuPont, IBM, Yahoo and many other corporations. Other women aspiring to achieve similar corporate titles may indeed need to work harder than men to prove themselves. If so, why wouldn’t they ensure that they are dressed for success and not to distract?

The Jewish concept of tzniut, which is usually translated in a clunky way as “modesty” but which really means a de-emphasis on the physical self and a greater focus on the person inside, is a gift for both women and men. It is a gift for women because it frees us from the stress of feeling we need to compete with other women about how attractive we can be. It liberates us – as women had claimed to want to be liberated – from being viewed primarily as objects, and encourages us to be viewed as whole people whose minds and ideas are even more important than our physical attributes.

It is also a gift for men who are very visually driven, and who are now in the no-win situation of working with women who simultaneously demand respect for their professionalism but who dress so provocatively that it is almost a form of sexual harassment.

Women can dress attractively and elegantly without compromising their dignity. Isn’t that what so much of feminism was supposed to be about?

The “Billy Graham” Rule and the Mississippi Governor’s Race

A Letter to My Body

Who I Am Person
Lessons from the Book of Jonah
Where Are We? The Body, Brain, Soul Problem
Dr. Sheila Nazarian’s Escape from Iran
Comments
MOST POPULAR IN Current Issues
Our privacy policy
Aish.com Is Looking for Great Writers