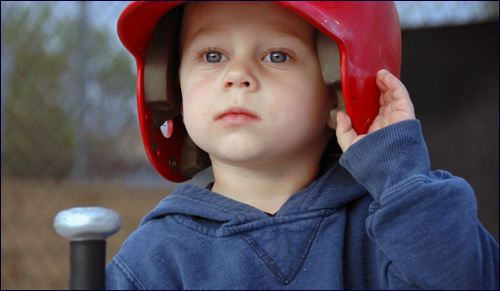 Even though he can’t hit the baseball, my son dreams of greatness.

I have a dreamy kid. He likes baseball and often swings his imaginary bat across the house. I duck to avoid getting swiped.

“Shimi, eat your breakfast. You need to leave in 10 minutes,” I call to him in the living room.

“Shimi, I made French toast. Come.”

He’s standing on the arm of the couch, announcing the scores.

“Shimi. Maybe just skip breakfast. You need to get dressed now.” He jumps down, runs and slides into first base. I stomp over to him, place my arm on his shoulder, and lift his chin,

“Sweetheart, your breakfast is ready.” I try not to raise my voice.

“I know. I’ve been calling you for the last ten minutes.” The muscles in my neck begin to tighten.

Of course, he didn’t hear me. He was in the baseball diamond, fielding pitches and hitting homeruns. He was riding on the shoulders of his teammates, having made the winning score. And for the third day in a row, he would be late to school.

Last week, I attended for the first time one of his little league baseball games. His first assignment: left field.

There he stood, staring at the sun rays, wiping his sweat, shifting his feet, and dreaming in left field.

Before heading to the batter’s mound, he practiced his swing with a real bat. He looked confident. I had high hopes, and so did he, especially with his mother and father standing nearby.

The first pitch was high. But we cheered him on for making the wise decision not to swing. The next pitch was fast and he swung too late. The third pitch was too low, but he swung any way. In the final pitch, I watched all the strength of his tiny frame swing at that ball, just like in the living room at seven-thirty in the morning, but this time, the ball fell into the catcher’s mitt. He dug his toes into the dirt, looked up at the umpire, then dragged himself away from home base, his eyes squinting, his lips quivering.

“Great job, Shimi! What a strong arm you have! That pitcher, whoah, he was tough.” I called out. He threw his helmet on to the bench, and began looking for his baseball cap. His eyes did not meet mine.

“Shimi! You’re in outfield!” the coach yelled out. With his search unsuccessful, Shimi ran out to the field without a cap.

“Shimi, where’s your cap?” The coach was chasing after him as I frantically looked under the bench for his lost hat.

“I can’t find it.” He was leaning on his right foot, blinking his eyes.

“You just had it! Okay here, take mine.” And the coach ran to outfield with the cap.

When the bases were loaded, and the other team began to score, Shimi just shook his head.

The next time Shimi went up to bat, my husband passed me his phone. He had loaded the book of Psalms onto the screen.

God, I don’t care if his team wins. Just let my son feel an ounce of success.

A new pitcher stood on the pitcher’s mound. A tall, skinny kid, he looked like a seventh-grader instead of a fifth-grader and his face was scrunched up with a focused look of determination. No balls would be flying past his ear, I thought.

That first pitch was so fast, I feared for my son’s life. Shimi jumped to the side like a pro. Then he knocked his bat into the dirt and did a practice swing before taking position for the next pitch.

I saw my husband’s lips moving, praying for Shimi’s success. But alas, Shimi dropped the bat and with his eyes on the ground, shuffled back to the bench.

“Next time, Shimi, next time. You did great, though,” The coach tried to comfort him. But there are no words of comfort for a person that feels like a failure.

The only thing there is are dreams.

“Shimi!” I called to him from the kitchen the next morning. “Great swing.” He was standing on the rug in the living room. He raised his arms up in triumph and began running the bases, nearly knocking over my two-year old daughter in the process.

“Keep going,” I cried out. “You’ll get the winning point!” And then, he slid into home base.

“Now, come. Sit and eat your cornflakes. You got your homerun.” He strolled over to the table, looking at his watch.

“Okay, good, I still got five minutes.” As he ate his cereal, I asked him, “Shimi, are you sure you want to sign-up again for baseball next year?” Why should I encourage my child to continue in an activity that didn’t give him much success? He looked up from his bowl and rolled his eyes,

“Yeah, of course. Why wouldn’t I? Don’t you see I’m getting better?!” He picked up his knapsack, grabbed his lunch and headed towards the door. I stared at him long and hard, not sure how to respond. This kid spoke with the confidence of a person who knows exactly what he’s doing. And while I didn’t see any dramatic improvements, he had definitely advanced his skills over the year. He was right.

And suddenly, I no longer saw a dreamy, disorganized kid with poor time-management skills. I saw a child that sets goals, rises above failure and perseveres to succeed.

I now understood what was going on in the living room every morning. He was practicing, refining his skills, and doing therapeutic visualizations.

And out there in left-field, he was busy dreaming of greatness.

And I have no doubt that he will one day succeed even if it means sometimes being a bit late to school.