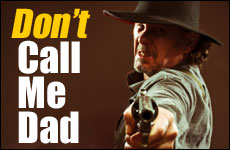 A young man came over to ask for permission to marry my daughter and I wanted to injure him. Badly.

“A very special young man is coming over soon,” my wife informed me one evening. “He wants to meet us before proposing to our daughter.”

“Proposing?” I thundered. “Proposing? Like in ‘Will you marry me?’ Over my dead body!

“Okay, over his dead body.”

Was Rapunzel’s tower available on such short notice?

I laughed bitterly at the thought of someone being good enough for my daughter. “Who's coming over?” I asked. “Moses?”

“Why didn’t you warn me earlier?” I complained. “I need time to prepare myself.”

“Because right now you’d be preparing yourself to board an airplane for an emergency business meeting on Anywhere Islands. And you don’t even have a business.”

“Maybe not, but I have an emergency.”

My little girl about to become engaged? I was overwhelmed with sentimental feelings. Was Rapunzel’s tower available on such short notice? Where could I find one of those specially treated, shiny red apples? Could I learn Houdini’s disappearing trick before the doorbell rang and make someone else disappear? How about the “throw the dagger blindfolded” trick? Hit or miss, I’d come out a winner.

Just then the harsh shrill of the doorbell shocked me out of my reverie. Funny, the chimes never shrilled harshly before.

“Is the cannon ready?” I yelled to my wife. I was suddenly glad I had splurged on that old Civil War relic; expensive but well worth it. “You distract him while I load.“

“What in the world am I supposed to say to this guy?” I asked my wife.

“Just bond,” she whispered from a safe place behind my back. “Bond. I’m sure he’s very nice.”

I swung open the door. My hopes were dashed. It wasn’t Moses. “My name is Bond,” I said nicely, extending my hand. “James Bond. Won’t you come in? Please excuse the mess. I was just cleaning my Walther PPK 7.65 mm. with Brausch silencer. One never knows when it could come in handy. Oh, that thing hanging up there? That's just my license to kill. Nice frame, isn't it?”

The young man smiled, shook my hand firmly and stepped inside. A firm handshake, another bad sign. And he looked me straight in the eye; what was he trying to hide?

“Offer him a chair, he really seems quite pleasant,” my wife whispered from her sanctuary.

“Nice to meet you,” I said. “To tell the truth, my name is not really Bond, I was just joking around, ha, ha. My friends call me Shotgun.” This friendly banter establishes a calm atmosphere conducive to pleasant conversation. “Please take a chair. It’s already plugged in.”

I wondered what kind of conversation it was possible to make with someone whom I had investigated and tailed by the FBI, CIA, Mossad, MI5 and KGB, Department of Sanitation and the ARSF (Anti Rodent Special Forces) for an entire year before he was even allowed to call my daughter. I already knew everything about the fellow, from which thumb he sucked when he was two-years-old to the pretzel he picked up from the floor in kindergarten and actually ate, ugh.

“So,” I said. “I hear you like pretzels. Care for one? Oops! Clumsy me. Help yourself.”

“What do I say now?” my raised eyebrows asked my wife.

“Oh, just talk man stuff, like about how you laid the planks on the deck or hung the blinds in the den. And be nice.”

“Would you please step out onto the deck and walk the plank?” I asked nicely. “Will that be with or without a blindfold?”

“Well actually,” said the young man, finally finding his voice, “I’d like to ask for your daughter's hand.”

“WHAT? You want my daughter’s hand?” I roared nicely, as I throttled the pleasant young man’s neck until his face developed a pleasant rainbow complexion. “I’ll give you a hand alright!”

“Honey, you must learn to let go,” my wife lectured, as she pried my hand, finger by finger from the pleasant young scoundrel’s neck.

My strategy of being nice was not working. I would have to reason with my daughter. She was a smart kid. She would surely come to her senses.

“But you hardly know the man,” I whispered. “I'm sure his mother loves him, but maybe he's a serial killer. He could be Jack the Ripper.”

“That would make him about 120-years-old,” returned my daughter. “Besides, my fiancé does not have a British accent.”

“So that’s why they never found The Ripper! Scotland Yard was always looking for a Brit. They should have been looking for a Yank! Besides, 120 is much too old for you. Find someone younger, like someone who hasn’t been born yet.”

“Well I don't think he would have much time to do any serious serial killing in between medical school, rabbinical seminary and volunteering for the homeless,” my daughter replied.

“WHAT? He volunteers for the homeless? They never did catch that serial killer who preyed on the poor homeless, did they? So it was Jack the Ripper all along. Wow! You just solved an unsolved murder. Good work! You keep an eye on him while I call the police. If he as much as blinks, shoot him.”

“Dad,” my daughter said, ignoring my straight thinking. “I am twenty-years-old now. We’ve been going out since I was nineteen.”

“Oh Daddy,” was all my daughter could say in response. She always says that when I’m right.

The situation was more serious than I had realized. A very serious talk with the young man was in place. “You realize, Jack,” I started, “that I would be the father-in-law in such a relationship.” That alone should have sent “You know who” racing for “You know where.” But as we already know, he’s a bit “You know what.”

“Do you know why I would be called the father-in-law?” I continued, hooking my thumbs into my belt. “Because I lay down the law in this family, and I say no more eating pretzels from the floor.”

The situation was deteriorating rapidly. Did he just call me “Daddy?” I don’t remember giving birth to him. But, if he had to call me something, I’d prefer it to be simple and to the point such as “Oh Great One Whose Advice I Shall Always Heed,” or “Father of Beautiful Girl Who Will Kill Me if I Ever Make Her Cry or Even Sniffle,” or “Your Supreme Dadness.” I was leaning towards “El Supremeo” when I remembered a conversation I had with my old friend Brian, who had married off a daughter a while back.

“So Brian,” I had asked, not realizing the enormous significance of the question at the time. “What does your son-in-law call you, and I don’t mean when you’re not around?”

Poof, my dilemma was gone. I could have kicked myself for not thinking of it sooner. It was ingenious in its simplicity. My future son-in-law would call me Brian.

I was just about to dispense some wisdom on the role of the father-in-law in today’s marriage, when the doorbell shrilled harshly again. It was a big night for harsh shrilling.

It was my father-in-law with a basket of shiny red apples for me, just in case I was hungry. The “Boss” was quite excited about the new chair he just bought and wouldn’t mind if I’d try it out for him.

“Its battery operated,” he said with a smile.

What could he have meant by that?

Moishe and Me
Were Adam and Eve Jewish?
How I Learned to Love the Multiverse
10 Big Jewish Inventions
Comments