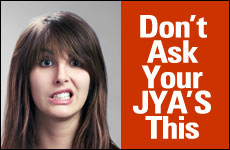 Last time, we looked at questions you shouldn’t ask your kids for fear of embarrassment -- theirs, and since they wouldn’t answer anyway – yours. However, while they’re still young, a small mis-step is bound to happen. Listen, there are worse tragedies than asking your neighbors in front of your 12-year-old: “My poor Rivkaleh just can’t get that broccoli out of her braces no matter what she does.”

However, starting in the teen years they will think they’re “grown-ups.” (They also think Uncle Pete, who invented a toilet that lights up is “interesting.”) Yet, we must exercise even greater sensitivity as JYAs have “opinions” and thanks to our constant educational vigilance, eloquent pisks with which to express them.

“Don’t you know we were on shpilkes waiting for you?!"

So, I now present you with five questions you should never ask your JYAs.

1- “Don’t you know we were on shpilkes waiting for you?!"

For 3,000 years Jewish parents have been “Lateness-shpilkesized.” After two minutes: “Maybe she took the long way home.” Five: “... and met a friend.” Six plus minutes: “… then was snatched by a serial killer!” When she saunters in 10 minutes late, resist the urge to tell her you called the ER, the BAU, and other initialed agencies that use radar and a net. She will make the incorrect assumption that you need one, and, believe me, the only empathy you’ll get is “Chill.” Much better to offer up a disinterested shrug: “You were gone? Harvey, did you know she was out?” This will throw her into turmoil as she’ll wonder what you really know, and fear you’ve washed your hands of the 2015 Mustang you promised for graduation! Trust me, mamalas, she’ll be home an hour early!

This question will cause your college-age kinder to think you doubt their abilities, thereby creating insecurity. True, most young people want to a) save the world; b) be on American Idol. Yes, it’s possible for JYAs to save the world, be creative and even make a living from such pursuits. But good Jewish parents must engage in brutal honesty! Did your “Marvin” (who wants to start a band) quit piano at “Chopsticks?” Did your “Sheila” (who’s talking building a rain forest from a desert) faint when her Manolo Blahniks got dusty? So, should you suspect your JYA may not be entirely “capable,” instead of hysterically asking, “Acting?! You passed out playing Haman in the school play!?” Assume a calm facial expression, and say: “Whatever you want, mamala … as long as you’re happy. We’ll support you 100% --right after you finish law (or medical) school, which, face it, we all know will make you even happier.”

3- “Why do you want to move out, all by yourself, into a dingy apartment?!”

There comes a time in every JYAs life when you will hear: “I want a place of my own in ‘the City.’” Instead of geshre-ing, “But that’s the same lousy apartment zayde paid $35 a month for in 1932!” agree that a little more independence is okay! Remember, it is your job to insure continuity, which means that at no time are they to live alone without a loving presence, e.g. you. Better you should spend a fortune bringing in the decorators to re-do her room or the contractors to fix up the attic, then: a) casually make sure she sees the bill; b) tell her that you’ve decided she can now lock her door.

If your YA still insists on leaving your safe, luxurious nest for a filthy, over-priced, studio with a goniff landlord in a gang neighborhood where a young person was attacked 22 years ago, you may step in reasonably as follows:

a) Get all her contact information: all cell phones, her friends’ and neighbors’ cells, the building phone; the local police, fire, rescue, and hospital numbers.

b) Call her at least three times daily: at 8 am to make sure didn’t succumb to SYADS (Sudden Young Adult Death Syndrome); at noon, to check that she made it to work or school unharmed; at 10 pm so you can say, “At least I know where my child is.”

c) Should you fail to reach her before your next call shift, start phoning her contacts.

d) Happen to be “in the neighborhood” – three times a week. Bring with you your “leftovers” she can freeze, an assortment of cleaning supplies, “reminders” (e.g.: “It’s tax time, mamala. Bring forms and daddy’s accountant will fill them out for you”).

4. “This person you’re keeping company with comes from a nice [read: Jewish] family?

This question may appear intrusive to your JYA so much better to say: “Mamala, I trust your judgment.” Then, invite the young man over. When you’re serving cake, ask … “Were you wondering if the cake is Kosher?” His answer will serve as a basis for further inquiry, e.g.: “Do you parents keep Kosher?” and casually: “So what’s the family name?” Then ask your younger kinder to Google them.

5. “Our son! Engaged! But are you … absolutely, positively sure, mamala?”

It’s finally happened. Your 20-something-year-old son made a commitment to what’s-her-name. Ah, but is “she” truly capable of providing him with the proper emotional and practical nourishment you’ve given him for 20 years?! Of course not. You know it, I know it. But asking such a question to your “Mr.-Bigshot-in-love” will aggravate him. Switch to a different approach like saying, “Oy the poor thing -- so skinny. But give her five years and she’ll gain 50 pounds. Easy.”

Should you feel any of the above about to burst forth, take a glass tea, lie down, and call me when the elephants in your head stop pounding.