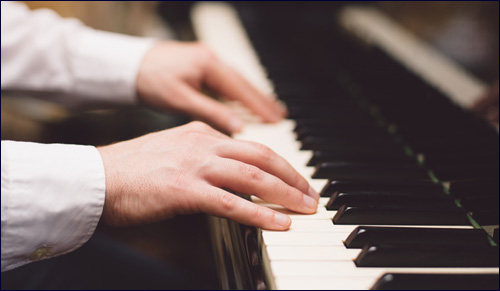 Who said you can’t teach an old dog new tricks?

We’re all familiar with the saying, “You can’t teach an old dog new tricks.” Well I’ve recently discovered that it’s not true.

For years my husband bemoaned the fact that he couldn’t play a musical instrument. He recently found himself with a little time on his hands and I suggested that the moment might be right to try piano lessons. Initially he was unenthusiastic and pessimistic. He couldn’t imagine that he could learn enough to play real music. But I persevered. I guess the gentle nagging worked (a bad lesson for me for the future) because he mentioned it to a friend who took matter into his own hands, renting us a piano and arranging for a teacher.

The die was cast.

And I think I have created a monster!

Now in every spare moment, I hear my husband practicing piano. He’s really enjoying himself. (Me? Not so much.) And there is something that bears a vague resemblance to music that is wafting through the house. His attention is completely absorbed by it and I tip-toe by, reluctant to interrupt. Sometimes I’m a little resentful of the time and attention the piano takes but mostly I’m happy for him that it gives him so much pleasure.

And that it works. Contrary to the “old dog” expression (not that I’m saying my husband is one!), my husband is learning to play the piano. It requires effort and discipline but he’s learning a completely new language and skill. And that’s very exciting.

We should never give up or feel that we are “too old” – maybe to take up skiing but not to work on our character, not to enhance our relationship with the Almighty, not to improve our understanding of life, not to explore our heritage on a deeper level.

This too requires work. This too may require exercising muscles that have lain dormant. This too may actually require new language and new skills. But one thing I’ve learned from listening to my husband pound out “Twinkle Twinkle Little Star” is that it’s possible. It’s one thing to believe it in theory; it’s another to see it in action.

It’s easy to give in to the notion that we are stuck with who and where we are, that this is as far as we can go, that we’ve grown as much as possible – but that is not a Jewish idea. We don’t want to stop growing until we no longer have the choice.

It’s also difficult not to give in to the notion that the goal of life is retirement – to relax, to take it easy, to stop pushing. Maybe that’s true regarding earning a living but it’s not true regarding life in general. In fact, once the pressure to “work” at a job diminishes, there is real time available for life’s important pursuits – no, I don’t mean piano playing – learning and growing.

Someone I know worked for many years in a civil servant position. It wasn’t a particularly good job or a particularly bad one. But it was a government job and it had a fixed retirement date. He received his pension and immediately returned to the yeshiva of his youth and now spends his days learning.

This is a world of opportunity and it’s a reassuring reminder that those opportunities don’t necessarily cease with age (in some cases they may even increase!).

I’m happy for my husband that he’s finally taking his long overdue piano lessons (my five year-old granddaughter is taking them at the same time) and that it’s a source of pleasure to him. (And I’ve bought some wonderful earplugs that make me happy.)

But I’m also happy to be reminded of the constant potential to learn and grow. It’s a good push. You can teach an old dog new tricks after all.

Sandy: A Lesson in Empathy