Don’t Be Skittish, Bring Back Yiddish! 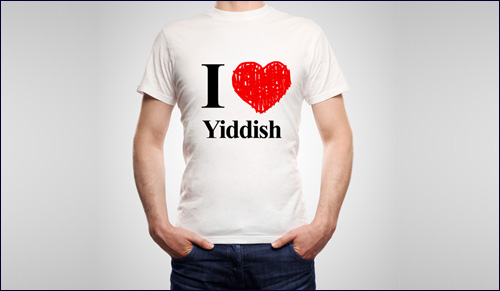 They say that Yiddish is dying off, but I’m not ready to give this colorful language any sort of burial!

We’ve all heard that Yiddish is quickly and quietly dying off, which is just such “a shandeh un a charpeh” (a shame and a disgrace) – and I for one, am not ready to give this colorful language any sort of burial. That’s right, I think we should all band together and make one large, collaborative attempt to work more of this unique terminology into our everyday language until it becomes as commonplace to say “Nu?” as it is to say, “S’up?”

I confess to having another motivation for getting this lively self-expressive language off the ground in a big way. My dad insists the next man I marry be capable of conversing with him, or at least gets his jokes. Things were going splendidly with my first macho boyfriend (I wisely advised him to just laugh his kishkes off whenever I giggled) until he got offended because my father called him, “boychick” – he thought that implied he was kinda feminine. He felt better when my dad hurled the word “Cockamamie” at him and things definitely went downhill again when my father finally lost it and bellowed, “Gay avek already, Gay avek!!”

My last gentleman-friend would’ve worked out wonderfully seeing as I taught him some perfect words to toss out at opportune moments. But sadly he became quite farblunget (mixed up!) in front of Dad. I could’ve sworn he knew the word for “family” was “mishpucha” but instead he blurted out, “Sir, I feel just as if you’re mashuga.” After that we both just stood around counting the number of times “Feh!” and “Cockamamie” came out of my father’s mouth.

But I should talk! I’m not without my own confusion when experimenting with Yiddish. Especially words that begin with “Sch.” Ever notice that nearly every one of these words has a negative connotation? I can’t keep them straight; all I know is that when I want to insult someone, I’ll use something that starts with this specific consonant blend. i.e. Schlemiel, Schlub, Schmo, Schlump, Schnook, Schnorrer, Schlepper, Schlimazel, Schmendrik, and of course Schmuk. What?? Do you think I can call everyone a scholar?!

And now may I present my recent journal documenting what happened when I tried to take up my own challenge and use more Yiddish.

April 30 – At the snack stand in Target, I asked the lady behind the counter if I could have a “bissel” butter on my popcorn and before I knew it, a clerk brought me a Bissell brand vacuum cleaner from the housewares department. Yep, this trial language thing is going to turn out great!

May 2 – I mentioned to my neighbor that I would “plotz” if my son were to get engaged. She advised me that picking out a burial plot at a young age could bring bad luck. Seriously?

May 4 – After joking around with the cashier in the pet store, I said, “I’d love to “kibbitz” with you, but it’s time to “schlep” this heavy bag of dry food home to my dog.” He said “What a coincidence, I also have a dog named Shep who loves Kibble.” Hmmm.

May 5 – I took this same dog (a spaniel) to the veterinarian clinic and because he’s 12-years-old, I asked if he would be considered an “Alter Kocker?” The doctor admonished me that they don’t alter cockers (or any type of spaniels) at this advanced age and that he should’ve been neutered years ago. Oy!

May 6 – In the theater, I asked the person next to me to please stop “schmoozing” because I couldn’t concentrate on the movie. He looked startled and asked if he’d been snoring? That’s right – “you schmooze, you lose, buddy!”

May 7 – When my girlfriend introduced me to the man she was dating, I asked if that was her “beshert?” She shook her head and scoffed, “This old blue striped thing is something he bought himself. But I picked out the tie.” I proceeded to teach them both “shmata.”

Go Yiddish, Go! By now I sincerely hope I’ve made a good case for bringing back all these dramatically descriptive words in a really significant way? Not just because it’s our Jewish heritage and it’s so entertaining, but for one very practical reason – at the rate my father insults potential suitors, I’m quickly going to require a much larger male pool from which to draw from for introductions. Oy!