Do You Only Date Jews? 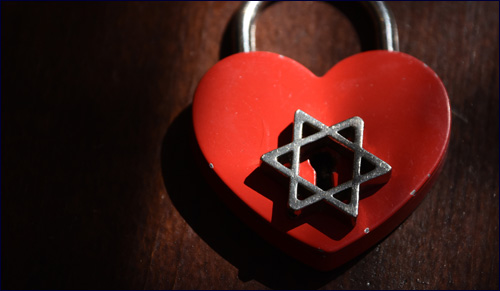 The defining choice for children of interfaith marriage.

I met Ali at a neighbor’s party. He was kind, funny, and comforting all at once. We had a great conversation that lasted over an hour. But for an intangible reason, I knew we weren’t going to be anything more than friends. And I knew he didn’t want yet another friend, so I gave him the soft goodbye and turned away.

The next text message I received took me by surprise. It was from Ali, and it was simply a question: “Hey! So, I see you’re involved in a lot of Jewish organizations. Do you only date Jews?”

Shocked by the honesty of the question, perhaps a bit flattered that he took the time to Facebook stalk me – a high compliment in 21st century dating – I asked myself the very same question: Am I only interested in dating a Jew?

When I first announced my move to Boston, my Christian coworkers joked that it would be the place to find a “nice Jewish doctor.” I told them a nice Jewish dentist would do.

When I went to Chabad, I was met with the Rabbi’s wife announcing that a young man’s mother was visiting in search of a match for her Israeli son. In my mind, I thought, He’s Jewish; that’s perfect enough. It took me by surprise when, at brunch, that wasn’t enough – not even to sustain the conversation.

When I opened a dating app for the first time, it, too, asked me the question of religion as part of the search criteria. Without even second thought, I searched only for Jews.

Somewhere within, at a place more spiritual than cognitive, I do search only for a Jewish match. I go out of my way to scope out if a Jewish-sounding last name is really Jewish. Raised in a Jewish home, lighting Shabbat candles and singing Hebrew prayers, I imagine a man who will join me at synagogue and teach our future children and me more about Judaism than I already know. In Jewish tradition, the mother is the akeret habayit, the mainstay of the home, carrying in her power the strength to create a Jewish abode.

But does that mean a mother can still create a Jewish home in a marriage of split faith?

I imagine a man who will join me at synagogue and teach our future children and me more about Judaism than I already know.

Being the daughter of an interfaith marriage myself and still a devout Jew, I struggled to answer my own question. In Deuteronomy, the Torah forbids interfaith marriage: “You shall not intermarry with them… for he will cause your child to turn away from after Me and they will worship the gods of others.” Clearly, I have not turned away from Judaism. As other children of interfaith marriages claimed to be ‘half-and-half,’ something I reserve for coffee condiments more than religious identities, I held closely to Judaism as my only heritage.

Still, I know that I could have easily turned away from Judaism, or to a lesser observance of the faith. There were days my father would invite me to church, leaving me, a small child, to put religion at odds with family. I had to be the one to say ‘no,’ to choose Judaism over church when I was too young to even tie my shoes.

I wouldn’t change my family at all; my loving parents are two of God’s greatest gifts to me. Even in an interfaith home, I was blessed with the spiritual guidance of my mother, my Rabbi, the Jewish community and synagogue. Though hard to imagine in an interfaith home, my non-Jewish father was often the one to sing loudest in prayer at the Shabbat services, and he proudly joined in the synagogue as I became a Bat Mitzvah. My mother carried an unparalleled spiritual strength, even when it came to making the challenging choices of refusing Easter with the in-laws in observance of Passover or lighting the Shabbat candles in the room with the Christmas tree. In that warm embrace of Judaism, there was no other option in my heart; Judaism was clearly a part of me.

Yet, there is a spiritual distance between my father and me, and his family and mine. There always will be when my foundation is in Torah and mitzvot and theirs is in a spiritual framework I do not carry.

Though dating in modern America is many steps away from marriage, if put to the test, my logical and spiritual self would not look outside the Jewish faith for a partner. If blatantly asked whether I’d date a non-Jew, my instinct would be to say “No.”

But instinct was at odds with my childhood. In copying my parents’ example, I actually never dated a Jew. I dated non-religious Christians, atheists, and Jews who are Jewish only by paternal descent. And none of the relationships worked. With each of these relationships, no matter how strong the connection, I was bringing to the dynamic a devotion to God that simply couldn’t be shared in the interfaith dynamic. The foundation of the relationship, the spiritual connection, was inherently fractured from the start.

A Jewish marriage is a binyan adei ad, an everlasting edifice. There is nothing more beautiful. And I have no doubt that my parent’s interfaith marriage will last their physical and spiritual lifetime. Their love, too, is beautiful. But it’s not what I want. It’s not the home I will create.

I am part of a generation in which interfaith marriage is becoming commonplace. And I am one of too many young adults realizing the harm of this pattern: a growing number of young adults will receive a text like the one Ali sent me, asking the question about whether he/she only dates within the Jewish faith. These individuals, just as I did, will think back on their own experiences to the struggles of holding onto Judaism in an interfaith home and the challenge of fundamentally disagreeing with the choice our parents made. Many of us will try to emulate our parents to avoid the discomfort of wanting something other than the marriage our parents have. We will walk a fine line of honoring our parents while still deciding that our parents’ marriage isn’t necessarily right, and certainly isn’t right for us.

I did text an answer to Ali, telling him finally, “Yes, I only date Jews.” Thinking of my parents, connecting to my faith, it was the hardest and most empowering text message I would ever send.

Mirissa D. Price is a 2019 DMD Candidate at Harvard School of Dental Medicine and future pediatric dentist. She serves as a Scholar of Dental Education at Harvard School of Dental Medicine and a Give Kids A Smile Leadership Ambassador. Mirissa’s research and outreach interests include social-emotional development in youth; addressing barriers and access to pediatric dental care; interprofessional collaboration; and dental education. As a child, doctors told Mirissa that she would live in a nursing home, confined to a wheelchair, crippled by pain. Instead, Mirissa uses her medical experiences to inspire others, living each day with a passion to spread pain-free smiles through her dental work, writing, improv comedy performances, and nonprofit work with children. You can stay up to date with Mirissa’s writing at mirissaprice.wordpress.com and follow @Mirissa_D_Price on Twitter or Facebook.

Questions to Ask on Your Date
Should I Break Up, Get Engaged or Keep Dating?
Time Is Your Precious Commodity
A Constant World in Flux
Comments
MOST POPULAR IN Dating
Our privacy policy