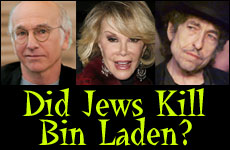 An elite team of Jewish celebrities may have helped bring down Bin Laden.

Osama Bin Laden is gone and most of the world is grateful for his absence. But to whom should that gratitude be directed? To the United States as a whole? To President Obama who gave the order for Bin Laden’s execution? To the various members of the military who carried out that order? Or should, in fact, certain Jewish celebrities be on the receiving end of any of that thanks?

The U.S. government has just declassified thousands of documents relating to this matter. Several of those documents detail suggested Bin Laden attack plans that numerous high-profile Jews offered our President in an attempt to get International Enemy # 1. Could any of those plans have contributed to the final plan that ended up successfully targeting Bin Laden? Judge for yourself, from this selection, from the newly declassified documents:

“President Obama, I have come up with the perfect plan to capture Bin Laden. It’s a new sit-com called “Curb Your Imperialism.” In each episode, Bin Laden, playing the character Jiri, a Middle-Eastern comedian, is given free reign to denounce yet another aspect of American society or Western politics and culture. He’s almost as cranky as I am. Michael Richards has agreed to portray his wacky, cave-dwelling neighbor Karam, who is always coming up with hair-brained schemes to blow up someone or something. His short, dumpy friend, Mustafa, played by Jason Alexander, is the ultimate loser. And his on-again, off-again girlfriend, Jalilah, is played by Julia Louis-Dreyfus, who is constantly jealous of the 72 virgins Bin Laden claims he’ll be with in heaven. Here’s the crucial part of the plan: when Bin Laden shows up for the first table-read, we grab him. You’re welcome.”

“Dear Mr. Obama, how does it feel to be on your own, chasing Bin Laden alone, like a Presidential stone? Speaking of which, every Al Qaeda founder must get stoned. How many caves must a soldier walk down before he can kill him a Bin Laden? The answer is blowin’ in Abbottobad. Who should actually pull the trigger? It ain’t me, babe. He fakes just like a terrorist. And he breaks just like a terrorist. And he makes bombs just like a terrorist. Yes, he does. But he breaks just like a little falafel. Come mullahs and fatwas throughout Iran – don’t criticize what you can’t understand. Your Anoush and Zari are beyond your command. The old Ayatollah’s rapidly fading. Mr. President, I wish there was something you could do or say to try to get Bin Laden to show his face today. He’s done way too much talking anyway. So as far as killing him – don’t think twice; it’s alright.”

“Look, Muslims believe that there are 72 virgins waiting for them in heaven. So, we give Bin Laden a little preview in the form of a TV game show called “Bomb or No Bomb?” 72 women, respectfully dressed in burkas, each enter with a backpack. Bin Laden is asked to guess which of them is carrying the most powerful bomb in her backpack. If he guesses correctly, he gets to use the bomb for any terrorist target. While he’s guessing, all 72 remove semi-automatic guns from their backpacks and shoot him. It can’t fail. I’m just having a bit of a challenge lining up sponsors, so let me get back to you.”

A crowd is gathered. Everyone gazes skyward in awe, watching an enormous, circular alien spaceship land. An otherworldly CREATURE emerges from the ship and makes its way down a ramp. The crowd starts to retreat in fear. Only one little GIRL stays to encounter the Creature. The two touch index fingers.

The girl points toward a house. The creature points its finger toward the house. The house is immediately dissolved as though it were never there.

The Creature returns to its ship, which takes off and returns to the heavens, as the awe-struck crowd observes.”

“Oh! Oh! Can we talk? Not if we’re dead. And that man needs to be dead. The biggest challenge with killing Bin Laden will be Donald Trump demanding to see the death certificate… You really want to find Osama bin Laden in Afghanistan? Just locate the only extension cord in the country and follow it to his dialysis machine!... One more -- Osama goes to visit a fortune teller, and asks her on what day he will die. The fortune teller replies,” You will die on an American holiday.” “Which one?,” asks Osama. “It doesn’t matter,” replies the fortune teller. “Whatever day you die will become an American holiday.””

“You may remember me, President Obama, from my 1986 feature film, An American Tail. And you may be asking yourself how a cartoon character could possibly have anything helpful to tell you about finding Bin Laden. First of all, I not only plan to find him, but also plan to kill him myself. You’ve got to admit – no one is going to be on the lookout for a cartoon mouse, so I can easily slip by. My enormous network of worldwide rodents will help me target exactly where he is. I will go there, bite him and infect his with a number of infectious diseases, rabies being the most gentle. Why me? Let’s just say a number of my relatives and close friends perished in that World Trade Center Building on 9-11. That’s when I said, “Never again!” So, say the word, Mr. President, and you will see me transform rapidly into a lean, mean, rodent killing machine! Shalom.”

If I Can Make It There
In the Shadow of David and Goliath
Where Do the Laws of Nature Come From?
Saadiah Gaon, Rashi and Maimonides: How Three Rabbis Revolutionized Judaism
Comments