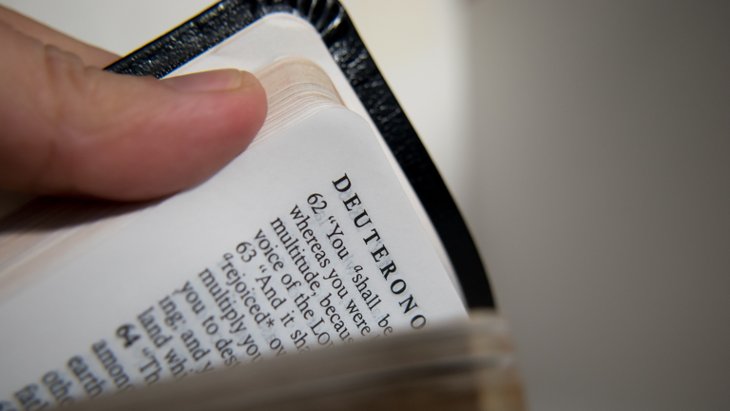 The unique covenant on display in the Book of Deuteronomy.

This was revolutionary. Covenants were common in the ancient Near East. But covenants between God and a people were unknown, indeed inconceivable. It was unimaginable that God would seek to constrain His own powers in the name of righteousness and justice. It was unfathomable that a supreme power would make a treaty with any people on earth, let alone the supremely powerless.

The key covenant was made at Mount Sinai, as described in Exo­dus 19–24. This in principle should have been where the Torah reached its culmination. But it turned out not to be so. Despite the fact that the Jewish people agreed three times to accept the terms on which God was to become their sovereign, it was not yet ready for such responsibility. That is the significance of the story of the Golden Calf.

Bereft of Moses, unsure what had become of him, the Israelites sought an oracle, something to tell them what to do and what to become. They were still in an age of magical thinking in which people do what the gods require and gods produce the outcome the people desire. That is not what the biblical covenant is about. It is about the acceptance of respon­sibility. It is about being guided by the experience of history, not about having responsibility for history taken from the people and assumed by God Himself. Covenant is supremely an ethic of responsibility.

That is why there is a long hiatus in the story of the Exodus. The people have to learn to fight their own battles. They must discover that God is a force within, giving them strength, rather than a force outside that fights their battles for them. They must discern the God who is close – within the camp – and not one who is distant, who performs miracles, liberates the Israelites, brings plagues against the Egyptians, sends the people water from a rock and food from heaven, and divides the sea for them. God has to be in the midst of the camp, not just at the top of the mountain.

That is, in essence, what the biblical story from Exodus 25 to Numbers 10 is about. It tells us that to have the Divine Presence within the camp, close, not distant, a special ethic has to apply: the law of holiness. That demands a Sanctuary, with all its associated laws. Above all, there must be no confusion or con­flation between the domain of the holy, which is beyond time and mor­tality, and the secular, the ordinary, the world of mortality, marked as it is by death, disease, disfigurement, and defilement. The holy must be a radi­cal break with the merely human. That is the basis of the laws of sacrifice and sanctity that take up this long diversion, comprising the last third of Exodus, the whole of Leviticus, and the first third of the book of Numbers.

All of this was the consequence of the Israelites seeking not just God-as-King, but also God-as-Presence. The key words here – Mishkan (Sanctuary), sh-kh-n, the verb “to dwell within,” and the rabbinic Hebrew word Shekhina, “Divine Presence” – all have to do with the idea of closeness and intimacy. A shakhen is a next-door neighbour. The Isra­elites sought God in the midst of their collective life, in the town square, as it were. This too is part of what Deuteronomy is about: a society wor­thy of being a home for the Divine Presence.

What then is the significance of this Mishneh Torah, this repeated and renewed covenant, over and above the one made at Mount Sinai and described in Exodus 19 to 24? The short answer is: responsibility.

We have met covenants before. God makes one with Noah. He makes a further one with Abraham, and He makes a third with the Israelites at Sinai. But notice the difference. The covenant with Noah is entirely unilateral. God speaks, issuing certain rules, and nothing more is required from Noah himself. The covenant with Abraham is more demanding in the sense that Abraham himself has to perform an act – namely circumcision – for himself and the male members of his family. The covenant with the Israelites at Sinai is more demanding still in that God insists that Moses indicate the nature of the agreement to the Israelites, and only when they agree, which they do three times (Ex. 19:8; 24:3, 7), does the covenant have force.

But note that all three covenants begin with an act of divine initiative. The fourth, which comprises the whole of the book of Deuteronomy, is undertaken by human initiative. It is Moses who rehearses and recites the whole content and context of the covenant. That is why Deuteronomy is the turning point in Jewish history. It marks the move from divine initiative to human responsibility. With­out Deuteronomy, the Israelites would not have made the necessary move to becoming not merely God’s subjects but also His partners in the work of redemption.

With the publication of “Deuteronomy: Renewal of the Sinai Covenant”, Maggid Books, the division of contemporary Jewish thought of Koren Publishers Jerusalem, is proud to announce the completion of Covenant & Conversation: A Weekly Reading of the Jewish Bible by Rabbi Lord Jonathan Sacks.

The Covenant & Conversation series consists of multiple essays on every Torah portion. Like the preceding volumes, “Deuteronomy: Renewal of the Sinai Covenant” fuses Jewish tradition, Western philosophy and literature to explore the biblical narrative as it relates to universal concerns of freedom, love, responsibility, identity and destiny. The collection has been described by critics as “profound,” “poetic,” “masterful,” “perfect reading for the lay person or scholar.” Volume I: Genesis was awarded the 2009 National Jewish Book Award.

The Ten Commandments
Scientific Curiosity and the Divine Encounter
Mind Over Milkshakes
Love the Convert
Comments
MOST POPULAR IN The Bible
Our privacy policy
Aish.com Is Looking for Great Writers