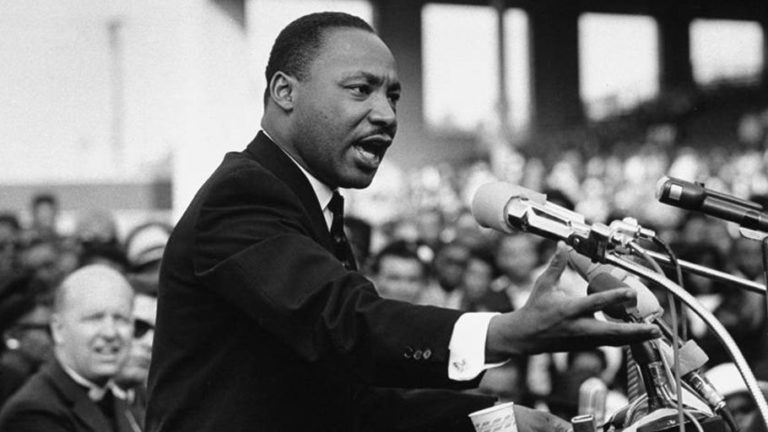 Michelle Alexander has given new meaning to the word chutzpah.

Readers of the New York Times have come to expect the almost daily Israel bashing.

This Sunday, however, was different. The vilification, framed as a courageous act in the spirit of a revered national figure for whom the entire country would be observing a national holiday on the next day in his honor, was now presented as a fitting tribute to Martin Luther King. In an essay filled with venom, exceeded only by its malicious distortions of fact and outrageous falsifications of history, Michelle Alexander would have us believe that respecting the memory of the man who so powerfully preached that “When people criticize Zionists, they mean Jews. You’re talking anti-Semitism!” requires her now to make condemnation of Zion – code words for Israel and Jews – the key to “a moral stance” in King’s image.

Alexander calls “the crisis in Israel-Palestine” – note the word Palestine – “one of the great moral challenges of our time.” She is profoundly disturbed “by the world’s silence to Israel’s practices reminiscent of apartheid in South Africa and Jim Crow segregation in the United States.” Somehow, in spite of her stated concern for this one issue she claims is greeted by universal silence, she seems somehow unaware of the bizarre reality that over the course of 2018 the United Nations has voted to adopt some 27 condemnations, the vast majority of which were directed at the nation of Israel and, most striking, the fact that totalitarian China had none – and neither did the terrorist organization Hamas.

In a world reeling from the barbaric and bloodied expressions of anti-Semitism and terrorism, not even exempting American soil, the Times gives us Alexander’s self-congratulatory prose extolling her sensitivity to the Palestinian narrative as her prophetic response to what she is certain Martin Luther King would have demanded she write in condemnation of the modern-day Jewish homeland.

“Our unity,” King wrote, “is born of our common struggle for centuries, not only to rid ourselves of bondage, but to make oppression of any people by others an impossibility.”

Regarding the modern-day miracle of Israel’s existence, King said “I see Israel, and never mind saying it, as one of the great outposts of democracy in the world.” “It was ‘illegal’ to aid and comfort a Jew in Hitler’s Germany. But I am sure that if I had lived in Germany during that time, I would have aided and comforted my Jewish brothers even though it was illegal is what King wrote from his Birmingham prison cell.

To use a deceased Martin Luther King as spokesman for those who justify extreme violence in the name of justice, whose modus operandi is to brutally murder innocents, men women and children for the sake of “a glorious cause” is to negate the philosophical and theological basis of the entire civil rights movement.

There is a biblical commandment which addresses precisely this perversion. The third commandment of the Ten Commandments reads “thou shalt not take the name of the Lord in vain.” The original Hebrew is more precise. It does not read “in vain.” Rather it says “to that which is vain.” Do not legitimize the vain, the false, the untruthful by camouflaging it as godly. Do not make God your partner as you strive to paint evil as holy.

Michelle Alexander has given new meaning to the word chutzpah. Where the most famous definition until now was that chutzpah is the plea of someone guilty of murdering his parents pleading for mercy on the grounds of his present status as orphan, chutzpah today is to prophetically project how one of the greatest spokesmen for nonviolence would today back the movement which seeks to implement its goals by jihad, glorifies violence and turns terrorists into idolized role models.

Martin Luther King is a modern-day hero worthy of a day in his honor. He does not deserve being shamed or his memory desecrated by aligning his movement with those who openly espouse the destruction of the state of Israel as well as the murder of all of its inhabitants.

Taking a Stand against Iran
For Every Individual, A Torah Scroll
Allegiance To The Monarch
Meet the Real You: Yom Kippur
Comments
MOST POPULAR IN Current Issues
Our privacy policy
Aish.com Is Looking for Great Writers