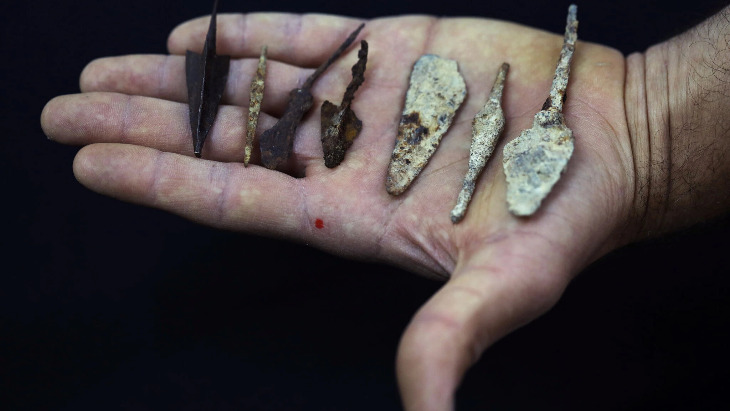 The Israel Antiquity Authority beat looters to caves in the Judean desert and discovered 2,000 year old biblical artifacts among other historical treasures.

It‘s every archaeologist's dream to find written evidence of the history they’re hoping to uncover. So when an Israeli team of excavators recently found fragments of 2,000-year-old scrolls of the prophets Zechariah and Nahum, the energy was electric.

“There haven’t been biblical scrolls found for over 60 years,” Dr. Joe Uziel, the Head of the Israel Antiquities Authority (IAA) Dead Scroll Unit told Aish.com in an exclusive interview. “Even when such scrolls were found, they were rarely discovered by archaeologists and so this time we had the golden opportunity to see and excavate for ourselves.” The breakthrough came during an epic four-year project to survey and investigate some 550 caves along the Dead Sea valley. 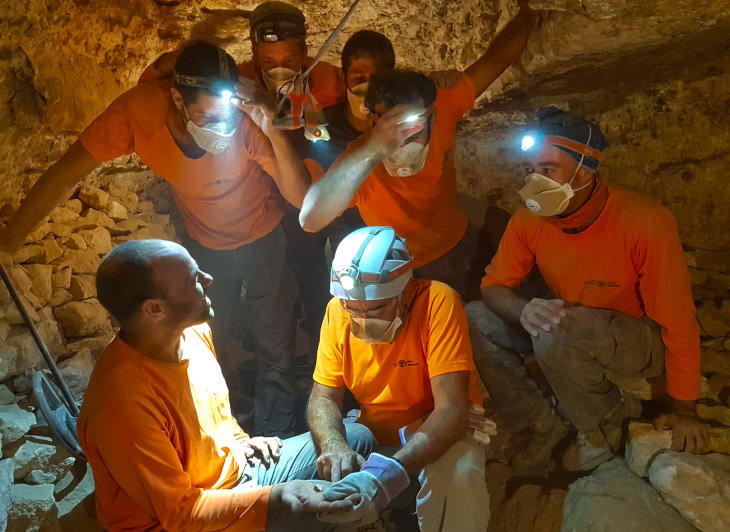 The moment when a team of Israeli archaeologists discover fragments of 2,000-year-old scrolls in a cave near the Dead Sea

The first of the Dead Sea Scrolls, the oldest Biblical manuscripts ever found, were discovered by Bedouin farmers in 1947, inside several large clay pots in the area of Qumran, on the northwest shore of the Dead Sea. The IAA now has in its collection around a thousand such scrolls, composed of 25,000 fragments, the earliest of which date back to the Second Temple period. Among the finds most recently announced were fragments of the books of the prophets Nahum, and Zechariah the last of the prophets, who lived in the 5th century BCE. 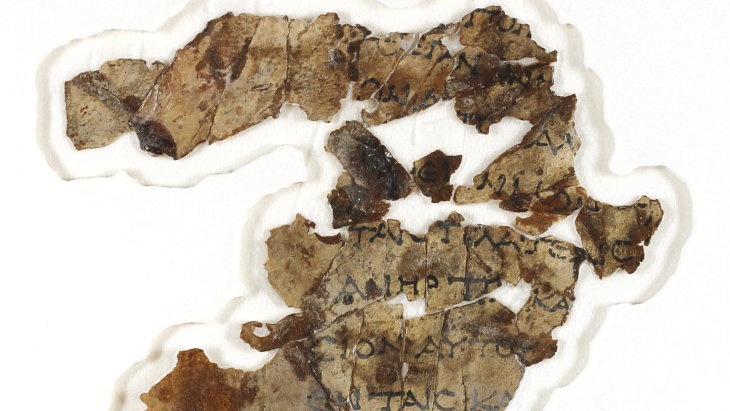 The scrolls recently found were written in Greek, which was the lingua franca at the time, however the name of God was written in ancient Hebrew script.

Remnants of the last stand for Jewish Sovereignty

Inextricably connected to the revolt of Shimon Bar Kochba against Roman rule in 132–136 CE, the scrolls found were among items taken by the Jews who fled to the hills and desert to mount a resistance against the Roman Empire in Judaea. It would be the last stand for Jewish sovereignty in the Land of Israel until the fight for independence in the modern State of Israel. In the end, the rebellion was quashed, although not without with heavy losses for the Romans.

A few years ago, fragments of scroll had been excavated from ‘the cave of horror’, in Nahal Hever, one of the ravines in the Judean desert, a site incredibly hard to reach, who’s location told a dramatic story of the desperate flight from the Romans. The cave gained its notorious name in 1960 when it was first excavated – without modern equipment or much light – and the skeletons of 40 men, women and children were discovered inside. The ruins of a Roman camp laying siege to the cave was also found at the top of the cliff above. 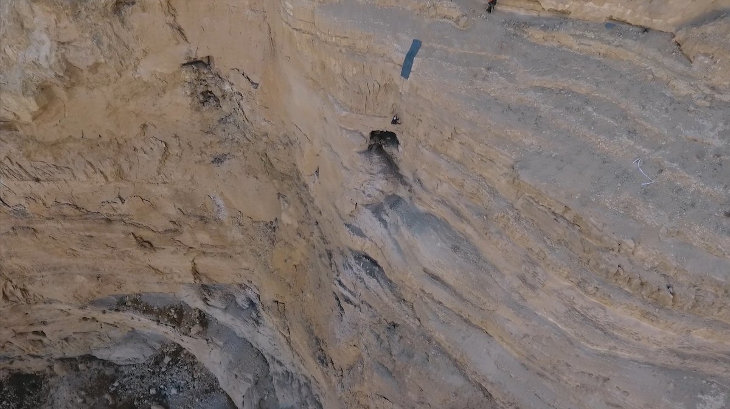 The cave of horror, where Jewish men, women and children hid out until they were starved to death by a Roman siege

Knowing there was probably more history to be uncovered in the cave the IAA planned a mission to fully excavate inside the cave, but the race was on to be the first to do so. “The whole area is a hot spot for looters,” Uziel explained, “As such, the project to survey and reach the cave was conducted on the quiet.”

To reach the cave the team had to scale a cliff edge for 150 meters, and then rappel down a steep slope 15 meters to its mountain face entrance. Inside the search soon began to yield results, with the fragments of scrolls found among layers of sediment and dirt.

Uziel added, “These scrolls, written in a combination of Greek and ancient Hebrew, were among the bare necessities, which the Jews who fled to these caves chose to take with them. Dated anywhere from 50 to possibly hundreds of years old at the time, they were likely passed down through generations, perhaps another reason why they had been so precious to their owners.”

My hands were shaking for days

Dr. Chaim Cohen was among the team of archaeologists in the cave who discovered the fragments. He shared with Aish.com readers the excitement of the moment.

“There was a lot of noise as we worked in the cave, assisted by several archaeology students. We had literally been sifting through every inch of dirt, sediment and earth when one of the students called out, ‘I think I’ve found something.’ A crowd amassed and the buzz increased. It took us all of two minutes to understand that we were looking at the most magnificent archaeological find that any of us had ever encountered.” 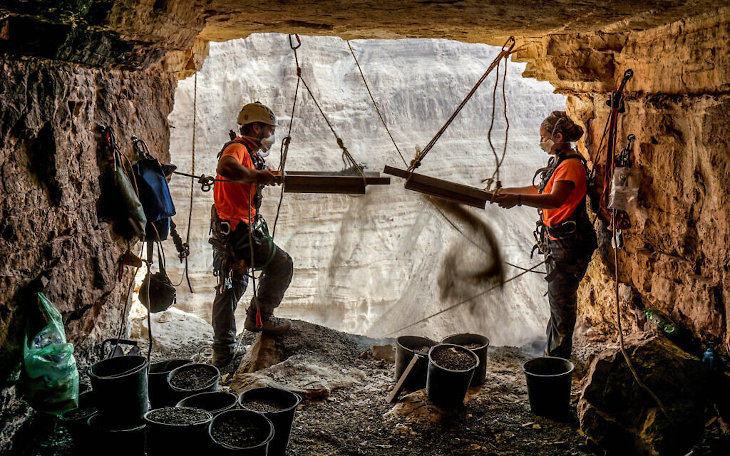 Harnessed up, and in precarious conditions, IAA archaeologists sift through sediment at the entrance to the ‘Cave of Horror’ at Nahal Hever.

Cohen’s first instinct was to rush to the entrance of the cave to phone the Head of IAA Organic Laboratory with a rare request to join them at the cave. Explaining the team had found fragments of scrolls, the lab chief arrived at the cave next morning to help with the preservation. “If we didn’t preserve them properly from the moment they were extracted, they would have started to deteriorate.”

“My hands were shaking for two days, and when the head of the lab arrived she started shaking too!” That entire day of gentle excavation and sifting was the most exciting and riveting experience of my career. In total we found over 30 fragments of scroll, many of them forming complete verses from the books by the prophets Zechariah and Nachum.”

Aside from the excavations at the Cave of Horror, the IAA also surveyed some 550 caves stretching from Qumran, in the north of the Dead Sea to Masada near the south. All of them could have offered welcome shade and protection from the Dead Sea Valley’s often scorching temperatures, and provided hideouts for more of Bar Kochba rebels.

The project which has taken almost four years, and is still ongoing, yielded some other incredible finds. “In one cave in the area of Wadi Mubaarat, it was clear we were the first people to have entered this cave since the Bar Kochba rebels had left. We found spearheads, arrowheads, a hoard of coins and a water jar. It was an indescribable feeling to feel the history of our ancestors – and it is such a privilege now, to be able to tell their story, of a handful of Jewish warriors who sat in that cave for a week or two, or however long amid the rebellion.”

The same cave also yielded an unexpected additional prize for archaeologists who unearthed a 90 liter wicker basket, dated to as early as 8,000 BCE, the oldest ever found.

“Not only was it incredibly ancient, it was completely intact, and lifting it out of the ground was another moment I will never forget.” 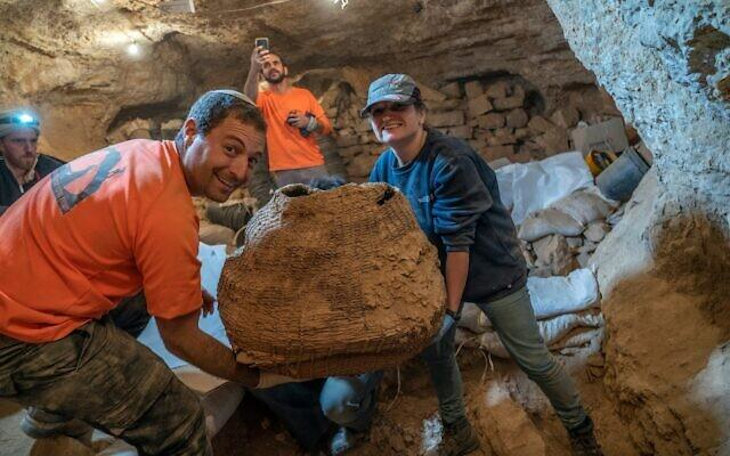 The 90-liter basket unearthed by the Israeli Antiquities Authority. The oldest ever to be found.

For Chaim, life as an archaeologist is an ongoing thrill. His four sons, wait to greet him each evening as he comes home, to ask what he has unearthed that day. “Whether we find coins, spearheads, or fragments of biblical texts – which has been the most exciting – it is amazing for me personally, and equally so, to allow others to also feel the magic of touching the history of their ancestors and the excitement that comes with that.” 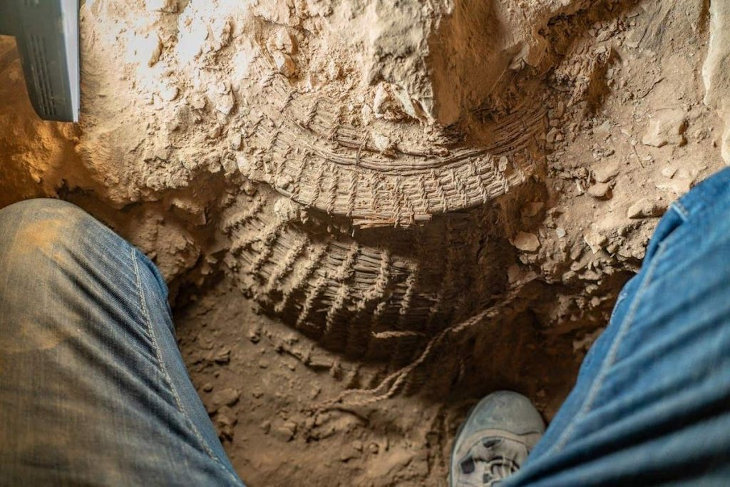 The Amoral Revolution in Western Values & its Impact on Israel

Murder at a Kibbutz

Four Points: Arguments for Israel
The Promise Of The Land
Which Chat Are You On?: Parshas Behar/Lag Ba’Omer
Do You Like Slow-Cooked Food? Thank the Jews
Comments
MOST POPULAR IN Middle East
Our privacy policy