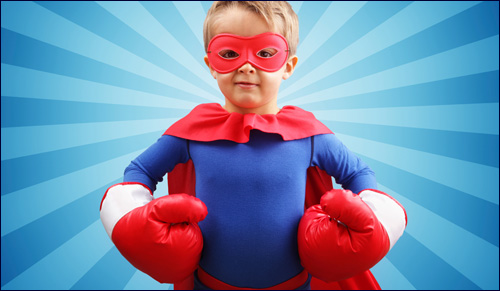 Girls are a Princess, boys are a Superhero. That is all you have to know. It hasn't changed in thousands of years.

Purim is here and I want to give you some advice so you can figure out the right costume for you and your loved ones.

Girls are a Princess, boys are a Superhero. That is all you have to know. It hasn't changed in thousands of years.

If the children go costume shopping with you, you are now subject to what is the “in” thing. In other words, anything that is expensive. What is “in”? Even though it might be sending the wrong message to seven year olds, in Israel, I have noticed that girls are dressing as brides. Boys are dressing like race car drivers, who will not get married till they are 45.

Children are also dressing as professionals now: Firemen, doctors, stewardesses, astronauts, cab drivers, professors, or beautifiers. Beautifier is what you call a cosmetician, in second grade.

This is actually a good opportunity for you to find out what kind of professional aspirations your child has. For example, if your child wants to grow up to be a caddy, you might want to start giving him golf lessons or have him change schools.

Wasting money on a Superhero? Put the kid in tights. Your child will look just like Superman did in the 1950s. Leggings also work.

Be creative and add ‘Man’ to any word, and you have a Superhero.

She wants to be a princess. Jewish Origami that. Cut the paper and staple it, with the stapler you used for the paper plate Hamentash, and you have a crown and the most unique little princess story. Underprivileged Princess. ‘The poorest princess in the whole wide world…and she got married to Prince Welloff, against his mother’s will.’

Don’t Abuse Your Children with The Costume

My mom dressed me as the Ace of Spades from Alice and Wonderland. She stuffed two pillows in one of my dad’s shirts, and stuffed me into dad’s pants, which came up to my neck. She could’ve just been honest and said she didn’t want me enjoying myself. Maybe she was mad that I was against doing CardboardMan again.

For example, Purim is not an excuse to dress up your little boy as a girl. I have heard it in Israel, time and time again, ‘Why has my child moved to Tel Aviv?’ Answer: you made that decision for them, when they were a toddler.

Biblical Costume: Get the Character Right

Make sure your headdress matches the right time period. Nobody wants to see a High Priest with a Spanish Maimonides style turban. All Biblical characters have skirts, but Joshua the Prophet did not walk around in a kilt.

My Moses costume last year got a lot of criticism from the parents of Jerusalem. They berated me, ‘Why are you not speaking with a lisp? There are kids around.’(Moses had a lisp). They continued, ‘How dare you have socks? Moses would never have been caught dead wearing socks with his sandals.’ I am translating, as they were screaming ‘Moshe’ at me, in Hebrew. I think Moshe would have worn socks in the chilly Purim weather, if he had them.

For the sake of peace in the home, you will have to be wearing matching costumes. You cannot be Indiana Jones, while the wife shows up dressed as Cinderella. People might think you are not a couple. They will question your relationship.

No true man will ever say to his wife, ‘I think we should dress like the Disney movie we saw the other week.’ And there is no woman that doesn’t look good dressed as a Disney character.

If you are man and can get out of the relationship before the holiday, then do so. If not, congratulations, you will be dressing up as a Disney character. And you will be the ugly one. Here are your choices:

If your children are under three years old, you will have to join in a family cartoon ensemble. If you say no to this, your spouse will accuse you of not loving your family. You could go as the Jetsons, but you will end up going as the Flintstones. That is your only choice. Kids can be Bamm-Bamm and Pebbles. Nobody knows that Bamm-Bamm was Barney’s child. And don’t forget, she is going to be Wilma, and you are going to be Fred.

Again. See if you can go as The Lion King. Nobody will know it is you.

Name tags always work. Are you a banker? Maybe you are an accountant. Maybe you are just a guy that showed up at a conference. The name tag covers them all.

Nobody knew I was the Ace of Spades. I needed a sign. If I just had a sign, it would have been a better costume, and I would have had a more enjoyable childhood.

Going for the racist look, you can throw a sign on yourself saying, 'I am not usually a racist. I am only Chinese on Purim.' This way, people don’t mistake you for your European roots.

Old School Jewish Dads
For Every Individual, A Torah Scroll
Allegiance To The Monarch
Meet the Real You: Yom Kippur
Comments
MOST POPULAR IN Jewlarious
Our privacy policy
Aish.com Is Looking for Great Writers