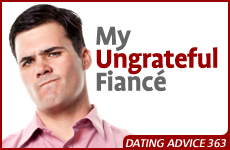 My fiance is complaining about the gifts we receive.

I am engaged to a wonderful man. He is kind, sweet, and caring and goes out of his way to help me and others. He has wonderful personal qualities, with one exception:

We recently began receiving some wedding presents. I was very bothered to hear his reactions to some of the gifts. He felt that some of our guests did not spend enough on these presents. I feel it’s important to be grateful for any gift, as it is very thoughtful and generous – regardless of price. I'm beginning to worry that I am overlooking a major character flaw.

When I voiced my concerns to my fiancé he said that we are spending a lot on each guest's meal and while they don't need to “match” that cost, they should come “close” with their gift. Additionally, if a gift was bought off the registry, he said it’s the same as a check and “the thought doesn’t count, since there was no thought.”

This is not a trait I would like to teach my future children. I asked if he would comment on the cost of gifts in front of our children. He said that not doing so would lower their self-worth, and that they need to know they deserve an expensive gift. I think children's worth should not be tied up in the gifts of others, and they should learn gratitude.

I know no one is perfect, but is this a trait that should concern me? Am I overreacting?

You're describing an experience that, without exception, every engaged or newly-married couple encounters at some point in their journey together: The discovery that they have vastly different outlooks on a particular issue, and/or observe a less-than-admirable quality in the other person – and worry how it will impact their new life together.

The dating process consists primarily of learning a lot about the other person, in order to make a well-informed decision whether this is the right one to marry. However, we can't learn everything, and the discovery process continues long after the couple has stood under the wedding canopy. It is only through the process of planning a wedding, interacting with the other's family, and setting up a home together, that differences in tastes, outlooks, and ways of doing things begin to emerge in ways they never could while dating. That’s when we begin to realize that the person we thought was a “perfect fit” doesn't match as perfectly as we thought.

We believe that because this is a universal experience, it is part of the way that God designed the relationship between husband and wife. In his book, Women's Wisdom: The Garden of Peace for Women, Rabbi Shalom Arush explains that God created men and women with fundamental differences that make married life a complex challenge. Their thought processes, sensitivities and motivations are fundamentally different, and yet God matches them together in order to compliment and learn from each other. It's often difficult to cope with a spouse who has different opinions and a dissimilar approach to many things.

Only though giving and taking will they bridge differences and reach a middle ground.

Rabbi Arush gives an example of an extremely lenient and compromising wife, married to a strict and uncompromising husband. Each initially has great difficulty understanding their spouse's qualities. The wife is deeply hurt when she sees her husband acting forcefully and refusing to yield, while he is upset when he sees her giving in to people who take advantage of her goodness. In time, the couple learns from each other that, "The true path is the middle road between the stubborn decisiveness of the husband and absolute leniency of the wife. Only through gaining awareness, learning to cope, and giving and taking, will they bridge the differences between their fundamentally different characters and thereby reach middle ground."

Every couple encounters differences in temperament and outlook. She loves a home filled with guests, while he prefers quiet and privacy; he's a lark and she's a night owl; she pays her credit card bills in full each month and he doesn't mind carrying over some of the debt; he's neat and she's sloppy. Any of these differences can become a major sticking point between a husband and wife if they're unable to accept the fact that differences are a fact of life, and that by trying to understand each other better, they'll find a way to cope with their differences and allow their marriage to thrive.

The specific issue you've written about is the sense of dismay at your fiancé's attitude toward gifts, which seems crass and materialistic compared to your own viewpoint. Consider: He may have equal concerns about your attitude, which he may think reflects the trite adage "It's the thought that counts" even when, in his mind, the giver didn't put much thought into the present at all.

So realize: You have different perspectives on the issue. As a first step, we suggest that instead of worrying whether he has a character flaw or a detrimental attitude, or feeling compelled to make him adopt your way of thinking, it's a good idea to first try to understand him better.

Why not sit down and try to understand how your differing attitudes about gifts developed? You can have each person speak for 10 minutes, without interruption or argument, about the messages you received about gifts when you were growing up.

You might be surprised to learn that gifts have different meanings for each of you because of the messages you received growing up. Your fiancé's family may have selected each gift with care and match its cost to the significance or cost of the occasion. They may have conveyed a message that cash or registry gifts were the choice of people who were lazy. Your fiance may have been told to interpret gifts as a reflection of the amount of esteem or affection the givers have for him. In turn, he may spend time and effort selecting the gifts he presents to others, and may feel hurt or insulted when he's in the role of receiving and not treated with the same deference. Instead of being materialistic and unappreciative, he could be reacting to what he perceives as a lack of consideration or "not doing the right thing."

Perhaps they believe that most newlyweds prefer cash.

Similarly, it will be helpful for him to understand how your perspective came about. Your parents may have wanted their children to value the little things in life so that they wouldn't become overly materialistic or mercenary, and told you it was more important to appreciate any gift, no matter how small or inexpensive. They may have overlooked a gift's cost because the givers had limited funds, and helped you value the giver's effort or sacrifice. They may have showed their love or esteem in non-material ways. Perhaps they believed that most newlyweds prefer a cash gift they could invest toward their future, rather than a gift they might dislike and have to return. They may have preferred to select presents from a registry list, so they could be certain their gift would be what the bride and groom actually wanted or needed.

Once your fiancé hears you articulate this perspective, he may begin to appreciate that your approach to gifts has many valid points.

Such a discussion should not be intended to prove that one of you is right and the other is wrong. Its purpose is to help you understand and respect each other's way of thinking. If you're able to accept that you see things differently and can "agree to disagree," you've both won.

Sometimes, it's not enough to accept that you have differing perspectives on an issue. You may need to solve a problem or take some joint course of action. It will be a lot easier to achieve this together when you both believe that your partner understands and respects your position.

Take, for example, your hope that when you have children, you and your husband will be able to teach them a sense of appreciation and not to associate how they value themselves with the costs of the gifts they receive. When each of you takes turns describing your thoughts and feelings, and listens in order to understand the other’s point of view, you may be able to decide on an approach you both are comfortable with.

Surprisingly, each of you may even find that your partner has influenced you to soften or change your position somewhat.

A healthy sense of gratitude underlies almost everything in life.

You've described your fiance as a very giving and caring man, and his attitude about gifts doesn't change his basic nature. At the same time, if your discussions with him about gift-giving reveal a more selfish streak of ingratitude, or if he were to refuse to listen to or respect your point of view, you’d be justifiably concerned. Mutual respect is the one of the cornerstones of a healthy relationship. In addition, a healthy sense of gratitude underlies almost everything in life – from having a happy marriage, to being tolerant of other opinions, to forging a connection with God. If your fiance is unable to feel or express appreciation, or can’t respect your position even if he disagrees with it, that is something you should clarify more fully before going ahead with the lifelong commitment of marriage.

We hope that the two of you can approach your upcoming marriage with the understanding that there will always be points of disagreement, and that there are many effective ways to cope with them. It will always be easier when you both feel understood and respected.

Dating Advice #27 - Is Kindness the Key?