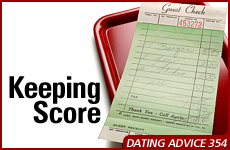 He wants everything to be 50-50. Do successful relationships work that way?

I'm a 27-year-old single woman. There's something about dating that I just don't understand. I believe that a gentleman should treat a woman like a lady. But it seems that in today's equal opportunity world, men feel no inclination to extend the invitation, pay for dinner, etc.

I have been dating a man for six months who insists that we take turns paying. I don't mind the idea, but I hate the way he emphasizes it. Sometimes if I have to postpone a date, he’ll say something like, "You just don't want to go because it’s your turn to pay." I have told him that this bothers me, but he continues with the same behavior – even suggesting that I am materialistic and manipulative.

Besides this, I am wondering if two people have decided to meet in person at a Starbucks, who should do the driving if you live about 30 minutes from each other? Should you meet halfway? If there is no halfway Starbucks, should the man drive to a location near the woman?

He does open the door for me and is generally considerate. But some of his score-keeping is giving me the creeps. What are the "new rules"? How do I balance between old-fashioned chivalry and modern sensibilities? Where should I be drawing the line?

One of the most frequent questions we’re asked is: What “rules” apply to paying for dates? Cultural standards have changed so much over the past few decades that there is no particular set of rules that applies to everyone.

However, there seems to be a few points of consensus. One is that a man should always pay for the first date, because he’s the one who typically initiates the dating and because in our culture, most people expect the man to pay. Paying also makes a good first impression on a woman, because it indicates that he is considerate, responsible and a gentleman.

On a first date, many woman are bothered when a man hesitates to reach for the check.

A number of women have told us how awkward they feel on the first date when a waiter places the check on the table and the man hesitates a few seconds, or doesn’t reach for it at all. They think, “Maybe he doesn’t want to pay. Maybe he doesn’t think this is really a date. Maybe he didn’t have a good time.”

When a man unflinchingly reaches for the check and tells his date, “I’ve got this,” she feels that he’s considerate of the potential for awkwardness, and is also ready for the possibility that the date may develop into a relationship.

Most people agree that a man should continue to pay for dates in the early stages of a courtship. He’s still pretty much the person who initiates by asking the woman out. However, if a woman invites the man for a date, she should be the one to pick up the tab. Issuing the invitation implies that you’re the “host” for the date. And, when it comes to a special event, e.g. to celebrate a birthday, promotion or other milestone, it should generally be one person’s “present” to the celebrant.

When two people begin a pattern of steady dating, that’s when the “rules” begin to fall away. Some women are more traditional and expect to be “treated” on their dates; some men agree with this approach and feel that a self-respecting man doesn’t allow his date to pay. Others feel that we’re in a more egalitarian culture, and it’s fairer for a couple to split the tab or take turns paying.

As for traveling, it may be fair to take turns traveling to each other’s neighborhoods for dates, or meeting midway, instead of one of them doing more of the traveling. Travel arrangements should depend on factors such as personal schedules, which of them has a car, and the availability of other transportation.

Sometimes, splitting the tab is a matter of economic necessity. Dates can be expensive, and it can be an unfair burden on a man to foot the bill all of the time, especially when the woman he’s seeing can be just as able to share the costs as he is. Because of this, we think that it’s a good idea for a dating couple to speak about this subject once they have begun to build a relationship that’s moving forward.

Though this idea of a conversation may sound awkward, it is a good opportunity for a couple to communicate their thoughts and feelings about an important subject. It’s helpful for dating couples to learn each other’s attitudes about money and sharing, and to observe how they are able to discuss their expectations and negotiate an issue that may mean a lot to one of them, and perhaps mean less to the other.

Even though you and this man have reached an agreement about taking turns paying for dates, you’re expressing ambivalence about the arrangement. It appears to you like more of a business proposition than a special dating relationship. We think the main reason you feel this way is that neither of you knows where the relationship is going and where each of you stands. Are you each hoping that this will lead to marriage? Sometimes, people are more comfortable about sharing dating expenses because they view the dating process as a shared endeavor, rather than viewing it as paying your own way with a companion.

At this point in your courtship, each of you should have a good idea of where you’d like to see it going. It’s important for you both to have a conversation about this subject. You can take the lead by finding an opportune time and place and then discussing the goals each of you has for the courtship.

Express how you sometimes like to feel that he’s treating you to a night out.

You should also discuss your feelings about sharing expenses for the dates, although it may be better to bring it up in a separate conversation. You can explain that you don’t mind the idea of taking turns paying, but that sometimes you’d like to feel as if he’s treating you to a night out, just as he may appreciate if you occasionally treat him to something special. That can be a good way to launch a discussion about what makes you feel special and how he’d like to feel special, as well as your attitudes about sharing expenses in the context of your relationship.

There’s another aspect of your financial arrangement that bothers you – this man’s tendency to “keep score,” and the suspicion he voices that you’re trying to take advantage of him when you have to cancel a date when it’s your “turn” to pay. This concerns us as well.

Right now, his scorekeeping extends to money, but it can easily encompass other areas of your relationship. Married couples can keep score over whose turn is it to fold laundry, who does a bigger share of the housework, or who contributes more money to the household. A certain amount of informal score-keeping is normal when a husband and wife see themselves as equal partners and want to keep things balanced. A wife might, for example, realize that her husband has picked up a lot of the slack at home while she was preoccupied with a big project at work, and do some extra favors for him to give him a break once the project is finished. On the other hand, if she felt that the balance of work recently shifted her way, she would want to speak with him about redistributing the work load more fairly.

Quid pro quo is more like a business deal than an emotional friendship.

However, score-keeping can be carried to an uncomfortable extreme. The man you’re dating may view a relationship as quid pro quo – “I do something for you, and you do something for me.” That’s not a healthy approach to a relationship. Partners should want to reciprocate as an outgrowth of their emotional closeness and view that they’re building something together. However, if everything partners do for each other is viewed as a quid pro quo, that sounds more like a business deal than an emotional enterprise built on friendship, caring and mutual goals.

If the man you’re dating has this attitude, it could be because he saw this score-keeping in his parents’ marriage and believes that this is the right way to do things. Or, he may have an issue with trust, either because he’s been taken advantage of in the past and is afraid to let that happen again, or because he’s unsure of where your relationship is going. Or, he may just be plain selfish and stingy.

Part of getting to know him better involves understanding his attitudes on this subject and finding out if the two of you can build a sense of trust that can alleviate both of your concerns.

In general, it’s important for the two of you to discuss your attitudes and feelings about sharing and give-and-take in a relationship. You may discover that you can come to a shared understanding about these subjects, or you may find out that his attitude indicates a bigger problem in your relationship, or with him personally.