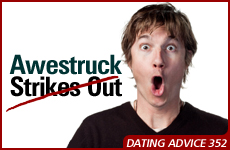 Coming to grips with unrequited love.

I hope you can help me with a dilemma. I'm convinced that I have found "Ms. Right," but I can't convince her of that fact. Here’s my story, and I hope you can advise me what to do.

I met this woman at a Shabbat dinner for young professionals and was attracted to her right away – she was beautiful, modest and soft-spoken. We spoke a bit at dinner and I followed up the next evening on Facebook. It took her a while to agree to go out with me, and our first two dates were pleasant enough. We had a lot in common – family background, education and some outside interests. I liked her personality and felt she had very fine qualities. Although our conversations were superficial, I didn't expect much more than that at the beginning, and hoped that as we continued to date, we’d begin to relate on a deeper level.

Unfortunately, she didn't feel the same way. After those first two dates, she wouldn't respond to my calls. When we finally spoke, she explained that for various reasons, she wasn't sure if she wanted to date me. I decided to give her some time to sort things through, while we kept in regular contact via text message.

A few weeks later, she suggested that we meet up one evening. I figured that she was still unsure about me and I was “on trial.” This made me nervous and unable to relax, and conversation was difficult. Contact from her dwindled after then, and I figured she had made her mind up. Nevertheless, she agreed to go to dinner with me a few weeks later and we had a nice, but heavily platonic evening. I saw her again at a party recently, but she tried to avoid me and we spoke very little.

She doesn't see me as anything more than a “friend.”

Then came the Dreaded Call. She said that she had enjoyed the time we’d spent together, but didn't see me as anything more than a “friend.” This was no surprise, but hearing it was devastating. That's because even though we'd never developed a deep connection, I had decided that I want to give her my heart and soul. I had indicated some of these feelings, but she has no idea they are this strong!

Now I don't know what to do. I feel like she doesn’t really know me, because on our dates I was too nervous and awestruck to be myself. It takes me a while to feel comfortable. I wish she had given more time to learn who I really am.

Another factor is that I am dating for marriage and she is not there yet. We never discussed this, because I thought it would scare her off. If she felt positive about me, I'd keep dating until she felt ready to focus on marriage.

So do I break contact for a while and try to move on? I feel so strongly about this girl that being friends – yet knowing she’s placed a barrier – is incredibly painful. On the other hand, if I accept her offer and maintain friendly contact, that will give me a chance to show my true self, with the hope that she'll eventually come around to liking me.

Is it reasonable to expect this woman to change her mind about me?

We have received a number of questions from people in situations similar to yours. They feel strongly about another person, who only wants to be friends and is not interested in having a relationship. They wonder if it’s possible to maintain and nurture the friendship in the hope that it will grow into a romantic situation in the future. In our experience, this rarely happens.

We sometimes see this happen when a man and woman were friends as they grew up, or who met in high school or college. Their process of turning the friendship into a serious relationship is an unconscious one. They develop a close emotional connection without realizing how deep it has become. When each decides that they want to begin serious dating, they realize they can begin to view the other person as more than just friends.

For some reason that we can’t explain, the process isn’t the same when a man and woman become friends as adults. If they’re already dating for marriage, they categorize the people in their lives as “friends,” “co-workers I’m friendly with,” or “potential marriage material” and seldom change this viewpoint. The reason for this could be that as we mature, we have a stronger idea of what we want in a marriage partner and come to definitive conclusions that someone either does or doesn’t have that potential. We value the friendship, but because we can’t see the “friend” as a potential spouse, we are not able to make the transition from friend to dating partner.

It is true that sometimes, a friendship between adults will turn into something more. In our experience, it occurs very rarely for people in their mid-20s through late-40s. More often, we see situations where one friend develops feelings for the other that are not reciprocal. Or one of the friends has always seen the other person as someone they might want to date. These people nurture the friendship along, hoping that in time the other will become interested romantically. We’ve known men and women who’ve wasted years silently wishing their secret feelings will be reciprocated, without it ever happening.

Having a mutual friend bring up the subject can save you embarrassment.

We’d advise anyone harboring this secret hope to muster the courage to find out straight if the other person is interested in dating. Instead of doing this directly, we suggest asking a mutual friend to bring up the subject, which can save you and the other person embarrassment if the interest isn’t mutual. They can say:

“I know that you and Rick are friends, but I think you’d be good together as a couple. You get along well and you want the same things out of life. Have you ever considered trying to go out? If you’re interested, I could see what Rick thinks about the idea.”

If she’s interested, you’ve jumpstarted a process that might have taken months or years to come about. If she only wants to be friends, you’ll hopefully be able to accept this information, change your expectations, and look elsewhere for your life partner.

Your situation is somewhat different in that this woman has made it clear how she feels – and you cannot seem to accept it. When she tells you, “I don’t want to date you anymore. I don’t feel that we’re the right for each other, but I’d like to stay friends,” she’s sending a clear message that, “As nice as you are, nothing will come from our relationship, and don’t expect it to.” She may have offered you friendship to soften the blow of the break-up, or because she genuinely likes you as a person (and may not realize that in doing so she’s given you false hope).

And so… you believe that if you deepen the friendship, she might magically decide you’re right for her once she gets to know you better. But as we explained, this almost never happens. We know it is difficult for you to see so much potential and be told that pursuing this is a waste of time. But it is.

So here’s our advice to anyone who hopes to ignite a courtship after having been told, “I don’t see potential for us and I want to break up and just be friends”: You’re better off not developing any friendship at all. That means no texting, no sending of “cute” emails, no discussing mutual life problems, no turning to each other for advice or emotional support.

If you continue to interact with her, you will become more emotionally entangled.

Even though you hope these communications will help her see the “real you” and change her mind, it probably will not happen. She’ll only view these interactions as part of the “friendship,” while you become even more attracted to her. You will become more emotionally entangled, only making it harder for you once the harsh reality hits. It might take her becoming engaged to someone else for you to realize how futile your efforts were.

Beyond this, the longer your emotional entanglement with this woman continues, the longer you will be “unavailable” to recognize when the person who’s really right for you comes along.

There’s another element to your situation that bears mentioning. Being a couple is more than having good chemistry. It is also two people who are headed in the same direction, with the same goals. In this case, you feel ready for marriage, and she does not. It can be very frustrating for two people to go out with each other when one is looking for a marriage partner and the other for nothing more than a pleasant evening. We suggest that in the future, you only date women who, like you, are dating for marriage.

In this case, even if this woman eventually does come around to making marriage a goal, by that time both of your lives may have taken different directions, to the degree it is clear that dating each other is not a good idea.

For these reasons, we think your wisest move is to acknowledge your feelings for this woman, mourn the fact that she isn’t interested in a deeper relationship, and give yourself closure by graciously declining her offer of continued friendship.

It would be good for you to think about what you’ve learned about yourself as a result of this experience, and how you can put that knowledge to work in the future. For example, you tell us that it’s hard for you to relax and be yourself on dates. It may help to work with a coach to develop this ability.