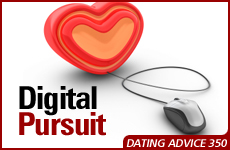 Has online dating changed the rules?

My experience in the dating world is that the guy takes the lead. But nowadays with people meeting on the Internet, Facebook, etc, it is more acceptable that a woman pursue the man? What is the correct approach in today’s digital world?

Your question is something that many people are grappling with. Traditionally, most men have preferred to be the pursuer in dating situations, and feel uncomfortable when a woman tries to play that role. Technology has leveled the playing field somewhat, because social networking and Internet dating sites have changed people's expectations about who "should" make the first move. Dating sites are set up so that the first person to become interested in an online profile initiates contact, and both genders make friending requests on Facebook, without giving it a second thought.

Don’t appear as if you're sitting by the computer, waiting with baited breath.

There also seems to be more gender equality when it comes to keeping an online exchange going. If someone contacts you on a dating site because they like your profile, you'll answer them and hope that this will begin an exchange of emails. Either gender can make the mistake of appearing as if they're sitting by the computer, waiting with baited breath for the next communication to zip through cyberspace, if they immediately reply to the latest message they receive. This over-eagerness is off-putting, no matter if it comes from a man or a woman.

Both sides also have to figure out just how detailed their email exchange should be. It can be challenging to figure out just how many personal details to share. What's enough to enable each of you to decide if you'd like to have a face-to-face meeting? You can start by elaborating on some of the items you mentioned in your profile and describe more about the direction you see your life taking. If you want to give the other person a better idea of your worldview, offer an anecdote about something funny or interesting that recently occurred, share your observations about an event reported in the news, or relate a book your read or movie you saw to something in your life.

Telling too much about your personal life at this stage of communication can scare the other person off, because it makes them feel uncomfortable and wonder if you have issues with boundaries. In addition, it's important to remember that since you're still strangers, you're not yet ready to reveal personal details such as your full name, home address, where you work, phone number, or private email address.

Even when the emails between you seem to flow well, it's important for both sides to remember that the purpose of Internet dating is to get two people to actually meet. We think that either a man or a woman can decide when they've learned enough about the other person to ask to meet, and this doesn't breach any unwritten rules of cyber-etiquette. If your request to meet has been turned down and your e-friend still wants to continue the correspondence, you’ll need to figure out his reason for not wanting to meet. The two of you can work something out if it's only an issue of scheduling or logistics. However, if he doesn't want to make concrete plans for a real date, you could be communicating with someone who doesn't want a real-time relationship (or may be an imposter). You can't push him to change his mind, but you can tell him that you've enjoyed your correspondence and now are ending it because you're looking for a face-to-face relationship.

What happens if the other person slows down the flow of emails? If the flow changes, either before or after you've met, wait a few days and then ask what's going on in a non-confrontational way. Your e-friend may be losing interest, or he may be overwhelmed by something in his personal life. Since he may not tell you the truth, look carefully at what happens with the quality and quantity of your exchanges. If they are diminishing, don't make the mistake of chasing him by sending him more frequent emails, touching base more often during your day, or pressuring him to tell you "what's going on." These cautions apply to both genders. It's futile to try trying to get an Internet "relationship" going when the other person has lost interest.

Get more info than what's on his Facebook page.

Facebook can be a great tool for networking, but it can also be misused. Let's say you become Facebook friends through a mutual connection, and you decide that this new person might be someone you'd like to date. We suggest that you don't show your interest on Facebook itself. Instead, look at the friends you have in common and ask one of them, who's got common sense and discretion, a little more about the man who interests you. There's a lot more to him than what's on his Facebook page. See if you're both looking for similar things in life and if he has the character traits you're looking for. Then, you can ask this friend if she's willing to approach him to talk about you and see if he'd be interested in meeting.

If this isn't something you've ever thought of doing before, consider it similar to what you'd do if you met someone at a friend's party and thought he might be a good person for you to date. Wouldn't you also ask a trusted friend a little more about him? If it sounded good, you’d ask that friend to tell him about you and suggest that the two of you go out.

The method of using a third party to help arrange a date is good for both men and women, and it keeps a woman from looking like a pursuer. And this way, if you both decide to go out, it will be because you're in the ballpark for each other, not just because you like each other's picture.

You can create problems for yourself with Facebook if you start to post a number of messages on the wall of someone you barely know, and begin to look like a Facebook stalker. You can also misuse Facebook by making it the sole criteria to decide if someone appeals to you. How many times have you checked out someone who's been suggested for you to date by looking at their Facebook page and deciding they're not for you? He may be a great guy for you, but his page may not contain the information your find appealing. You'd be better off talking to some mutual friends to find out more about him, and not judge him on his photos and status updates.

We wish you success in navigating the digital dating maze,

Dating Maze #304: We Have Concerns

Dating Advice #79 - Parents at Home
Vayelech 5783: Regret and Repent
Rabbi Sacks: Focus On the Important, Not the Urgent
Put Your Foot Down: Are Human Feet Poorly Designed?
Comments
MOST POPULAR IN Dating
Our privacy policy
Aish.com Is Looking for Great Writers