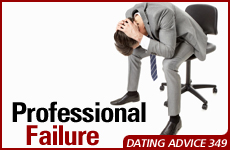 I love this guy but it seems like he’ll never succeed.

I have been dating a great guy. We get along perfectly, like two peas in a pod. I have dated many men and I have never felt a connection like this! He feels the same way about me and we are seriously considering marriage.

The only problem is that I'm worried he won't be able to hold down a job. He got kicked out of medical school for bad grades and finally graduated from professional school in a medical field after having to repeat a year. Then he got a wonderful residency, but lost it because he failed his boards. He is working as an assistant for a medical professional right now and plans to re-apply for residencies and take his boards again.

I love him like crazy, but I'm worried he won't be able to hold down a job, or that he will be sued for professional incompetence. What should I do? I'm desperate.

At first glance, it might seem that you're grappling with a choice between love or money – do you choose the first man you've ever really connected with, or do you end the relationship because you're worried about his ability to keep a job or earn a good living. Of course, the issue you're facing is much more complicated than that, with a lot going on underneath the surface.

You haven't told us why the man has so much difficulty with his studies and exams. On the positive side, it sounds as though he is persistent, pushing himself forward even when he doesn't at first succeed. He's bright enough to have been admitted to medical and professional school and to land a residency.

Has he been tested for ADD or a learning disability?

Yet what has kept him from doing well academically? Has he been tested for ADD or a learning disability? If he has either of these, he may not have independently developed the skills that can help him take tests or fully grasp the material he needs to know. It's not uncommon for someone to be first diagnosed with learning problems as an adult, and many specialists are trained to help adults overcome these difficulties.

Other reasons why the man you're dating has not performed well academically could be that he's very anxious about test-taking, has low self-esteem and gives up on himself, or lacks the motivation to study. He may never have explored the reasons he’s having so much trouble, or may not be aware that for all of these issues, there are several ways he can learn to deal with them and hopefully realize his goal of passing his boards, completing a residency, and obtaining a license in his field.

It's important that you discuss all this with him. If it bothers you enough to write a letter asking for advice, it's something the two of you must address. You can't ignore this issue and hope it will work itself out, or that you can marry him and then persuade him to work harder or study better. He has to hear your concern about his abilities or lack thereof. If you'd like him to meet with a learning disabilities specialist or educational psychologist to learn what's been holding him back and how to deal with it, you need to tell him so. It will be up to him to decide how to take it from there.

You may be holding back from raising your concerns because you're afraid to hurt his feelings, or because it might seem as though you don't have enough faith in him. It's true that this is a delicate subject, and you'll have to approach it with sensitivity. One way is to first talk about his many strengths and his character traits you admire. Then tell him that you're concerned about the difficulty he's had passing his boards and completing a residency, and why. Ask what it's been like for him, and what concerns him about the situation. Ask if he's ever explored reasons for his difficulties, and what he thinks about obtaining an evaluation, and working with someone to address any weakness the test may reveal.

Focus on how he can succeed in the future.

Listen to him without passing judgment or telling him what he did wrong or might have done differently. Focus on the issue at hand – how he can help himself succeed in the future. This is an approach that other couples have used successfully to discuss an issue that one or both of them feels must be resolved before making a decision about marriage.

Both of you need to understand that ultimately it will be up to him to decide what he wants to do, and that he may need time to weigh his options and choose. Then, once he comes to a decision, you'll have to make one of your own. If he decides to get tested and then use professional help, can you be supportive and encouraging? Or will you become frustrated if he encounters more difficulties, and then begin nagging him to achieve what may be beyond his grasp? Can you accept the possibility that as hard as he may work, he'll never be a "superstar"?

Will you be able to value his efforts and respect him for the man he is, even if he doesn't make a large income or struggles with his career? Will that hold true even if he doesn't pass his boards and has to find another career? It's vital that you ask yourself these questions and answer them truthfully.

And finally, if he doesn't want to proactively address his challenges, will you want to continue your relationship the way it is? It seems to us that if he isn’t willing to explore possible reasons for his difficulties and try to overcome them, you may feel frustrated and come to resent him. We don’t think you should give him an ultimatum about getting professional help for his current issues – because he needs to make that choice himself – but on the other hand, if he does not go for it, you may decide to view that as a deal-breaker.

We can see that you want your relationship to succeed because it has taken you so long to find someone with whom you feel a deep emotional connection. We can also see that you understand that a successful marriage is built on more than love. An enduring, satisfying marriage is based on compatible values and goals. You may both value perseverance and a willingness to work hard to overcome a challenge. You may value personal qualities that aren't related to his ability to pass his exams or earn a good income – his kindness, the way he relates to people, his determination. And you may decide that you can be happy with a modest lifestyle. However, if you think it's important for the man you marry to address his challenges – and he disagrees, or you aspire to a lifestyle that you may not be able to obtain due to his challenges, you may not be right for each other.

A successful marriage is also built on mutual respect, admiration and acceptance. Do you respect him for who he is? Does he have character traits you admire? Can you accept him for all of his good points as well as his shortcomings? If you can't answer "yes" to each of these questions, you probably aren't right for each other.

You used the word "desperate" at the end of your letter. What does that mean? Are you desperate for advice? Desperate to have a relationship? To get married? Choosing a marriage partner can't be made from a point of desperation. If your values and life goals are compatible, if you are comfortable with the way he chooses to address the issue that concerns you, and if you respect, admire and accept each other for who you are right now, you have the foundation for a long and successful marriage.

One Drink Too Many: My Journey of Breaking Free from Alcohol
The Scandalous History of the Aleppo Codex
Who was Two-Gun Cohen?
Why Really Everyone Believes in Free Will
Should Jews Support Ukraine?
The Jews of Cuba
Comments
MOST POPULAR IN Dating Advice
Our privacy policy