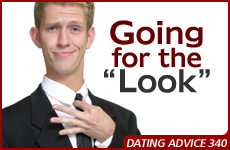 Help! I'm only attracted to one type of "look" and can't get past it.

I have fallen into a dating pattern that is making me and everyone around me frustrated and crazy.

When a guy comes to pick me up for a date, before he even gets to open the door, I can immediately make my decision from taking a peek through the kitchen window. I have a "look" that I'm physically attracted to, and do not allow myself to get past that "look."

Yes, I realize that attraction comes in different forms. I know what it means to be attracted to guys emotionally and intellectually. But when it comes to dating for marriage, should I give up that "look" if this is the guy I will be spending the rest of my life with?

I’m getting a lot of pressure from my friends to change my attitude. Now I’d like to hear your opinion.

Your letter puts to words a feeling that a lot of daters have but never articulate. Most people have a picture in their mind about how they'd like the person they marry to look, and they are naturally attracted to someone who has that "look." Like you, they seek it out, and many times refuse to even consider someone who doesn't have it.

Yet in our experience, most people don't eventually marry someone who has the "look" they conceived of! We're going to explain why this is so, but first, we need to state clearly: Physical attraction is an important aspect of a relationship, and is definitely something you should expect to feel for the man you marry.

So while attraction is a vital element of a good relationship, whether or not someone has a certain "look" is not. That idealized "look" is a preference we develop through a combination of influences:

It is normal to be inclined toward a particular type of look. However, when it becomes the main criterion for deciding whether or not to date someone, we actually end up cheating ourselves in two ways. The first is that we deemphasize all the other important criteria. The second is that by being so rigid, we don't wait to see if we can develop an attraction to this person. Many times, we can.

Often, physical attraction takes time to develop. Try to remember if you ever met someone - a classmate or co-worker, who seemed pretty average-looking to you at first. As you got to know them better, didn't they begin to appear more attractive? When you became comfortable with their personality and started to feel an emotional connection, you began to view them from a different perspective than you had at first.

Now recall someone who you thought was really good-looking, but who turned out to be a person whose inner qualities didn't appeal to you. Did your feeling about their looks change?

A similar thing can happen when we date. Someone who initially has your "look" may turn out to not have other key qualities. Conversely, someone who has the values, goals, character and personality that you appreciate can, over a short period of time, actually become attractive to you. This is because as you develop an interpersonal connection, you're able to let go of your idealized image and look at the other person through a fresh set of eyes.

This isn't something that only happens occasionally. It is so common that most of the happily-married couples we know had this experience.

There's another important aspect of physical attraction that bears mentioning. Ask yourself what would happen if you married someone primarily because of your attraction to him, and over time his looks changed. His face became fuller, his hair thinned, he put on a few extra pounds. Would you still be attracted to him? Would you still want to stay married to him?

If looks were the primary reason you married him, the answer would probably be "no." But if you also chose him because of his personal qualities, shared goals for the future, and overall compatibility, you'd adapt to his changing looks. You’ll still be attracted to him, even though he isn't as young, fit, or wrinkle-free as when you first met. Because his looks weren't the primary focus of your relationship, your attraction to him was based on a multitude of other factors and evolved as you built your lives together.

Of course, this principle applies not only to “women choosing men.” In fact, experience shows that this is even more relevant to “men choosing women.”

So our answer to your question is: Keep your mind open about men who don't necessarily have the “look” you like. If a man has many of the other qualities you're looking for, but you're not initially attracted to him, go out with him and tell yourself to give it some time. If you have a pleasant time on the first date, or even if you feel neutral about your time together, go out again. Give yourself three or four dates to see if you are starting to enjoy his company and are beginning to feel a connection. Then ask yourself if he looks better to you than he had at first. Have you noticed any features, like his smile, dimples or eyes that you're starting to like? Is his general appearance "growing" on you?

A "yes" answer means that your attraction to him is taking root and you're starting to appreciate his inner qualities as well.

Conversely, if those feelings haven't started to develop by the fourth or fifth date, there's a good chance they never will, and at that point you should probably stop dating him.

Dating maze #281 - Negative Father Image
Vayelech 5783: Regret and Repent
Rabbi Sacks: Focus On the Important, Not the Urgent
Put Your Foot Down: Are Human Feet Poorly Designed?
Comments
MOST POPULAR IN Dating
Our privacy policy
Aish.com Is Looking for Great Writers