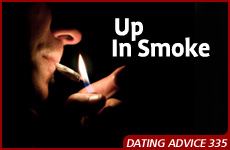 She refuses to date a guy with an addictive habit.

For the past two months, I've been corresponding with a man I "met" on a dating website. He is, like me, divorced and in his late 30s, and his profile really appealed to me. He sounded like a down-to-earth man with Jewish values that are similar to my own. I really respected the fact that he's remained in his community because he wanted to be a hands-on parent for his daughter, who is graduating high school next month.

After a few weeks of exchanging emails, Simon began to call me once a week. These were like "telephone dates" and I enjoyed speaking with him about our personal and professional lives, our family backgrounds, and the values that are important to us. During one conversation, I asked if he has any addictive habits like drinking, smoking, etc. He told me that he started smoking marijuana three years ago because he felt lonely.

He insisted that "I can quit anytime."

I told Simon that I'm opposed to dating someone who has any chemical dependence. He insisted that "I can quit anytime." We spoke about this subject at length, and I explained to him that if he wanted to continue our long-distance relationship, he had to agree not to smoke pot. He left me with the impression that he would stop, and we began to plan a face-to-face meeting for the near future.

As the date of the meeting neared, I wanted to confirm that Simon had in fact stopped smoking. I was crushed when he told me that he had not stopped. "But you know it bothers me,” I told him, “and I made it clear I could not live with that." After a moment of silence, he whispered, "A package deal." I was so upset that I had no words.

Simon later emailed me that communication seems to be a problem between us. I don't agree that this is the problem – I think that he misled me and I feel betrayed and angry that I wasted two months of precious time.

What is your opinion? Simon still hopes that we will meet soon, but I am not interested in seeing him. I have known too many with addictive personalities and I don't trust people like this. Can you blame me?

Thank you for writing and giving us an opportunity to address your predicament. As we see it, you are really asking three questions:

1) Should I decide not to date someone who otherwise sounds right for me because he has a character trait or a lifestyle choice that I've decided is unacceptable in a marriage partner?

2) If he says that he's willing to stop, can I make our dating conditional on his agreement to stop? And if he doesn't follow through on his agreement, can I decide to end things with him?

3) What if that behavior is marijuana use? Am I correct in refusing to rely on promises to change in the future because he may have a dependency that won't be easy to stop?

Our answer to each of these questions is a resounding "yes." To begin with, all of us set criteria for the people we agree to date. If we're looking for someone to spend the rest of our lives with, we'll want someone whose value system and life goals are closely compatible with our own. We may insist upon certain character traits, such as honesty and a strong sense of responsibility, that are consistent with ours.

Any dater has the right to insist on deal-breakers.

We may also identify personal qualities and lifestyle choices that we're not willing to accept. Often, these are very well-considered criteria that we've decided would disqualify someone who otherwise seems to be a good match: e.g. we live in two different countries and neither of us wants to relocate; I don't want to be married to someone who smokes cigarettes; or I need someone who's chosen a direction in life, but at age 27 he still hasn't figured things out for himself. Any dater has the right to insist on criteria that are deal-breakers, just as you have done with Simon.

Sometimes, a dater may decide to take a chance on going out with someone, even though they have a deal-breaking negative quality. They hope that it might not bother them as much as they think it will, or that the other person may agree to make a change. In our experience, neither of these scenarios very often occurs, and the couple usually ends up breaking up. That's why we believe it's wise to stand by well-considered decisions about deal-breakers.

When you told Simon, "This is a deal breaker for me. If you want us to continue, you have to agree to stop smoking," you made your feelings very clear. You have the right to lay down this condition, just as Simon has the right to say, "No, pot is a necessary part of my life right now. I don't want to stop, so I guess we'll have to end things."

Instead, Simon left you with the impression that he was stopping. We can understand the sense of betrayal you felt in discovering that Simon was still smoking. It doesn't much matter whether he genuinely thought he'd be able to stop, and was too embarrassed to tell you it was too hard for him, or if he deliberately misled you in the hope that you'd change your mind, or that he'd try to stop only if things became serious between you.

Of course, it’s also possible that you read something into what he was implying because you wanted to believe he was willing to stop smoking so that the two of you could date.

Let's speak specifically about the issue that divides you – his marijuana use. We know that part of the population feels that recreational marijuana use is an acceptable lifestyle choice that doesn't lead to addiction or dependency; many others believe the opposite. Without getting into the argument of who is right (Jewish law does forbid it; see Igros Moshe YD 3:35), the bottom line in your situation is that both of you are in different camps. You shouldn't have to accept Simon's lifestyle choice any more than he has to agree to what you want, and it's certainly not wrong for you to stand your ground on this.

Drug use supplants an internal method of facing challenges.

In addition, you're savvy enough to realize that in spite of Simon's insistence that he "can stop any time I want," he has developed a psychological dependency as a way to cope with life's difficulties. When someone uses a drug – be it alcohol, marijuana or prescription medication as a coping mechanism and analgesic – it means they haven't developed their own internal means of addressing life's stresses and challenges. This can have a severe impact on any long-term relationship.

The idea that Simon can end his smoking any time is well-meaning but naïve. We believe that if he wants to have a healthy relationship with you or anyone else, he'll have to do more than just stop smoking – he'll need to learn better coping skills for handling stress and the pain of loneliness.

Congratulations for standing your ground on this issue. As compatible as you and Simon may otherwise seem, he doesn't appear ready to be a partner in a long-term, healthy relationship. We hope that our letter has given you the validation you seek for your decision – your instincts here are correct. And we don't advise confronting him to explain how betrayed you feel. He probably won’t take responsibility for misleading you, and will say that your standards are too rigid or intolerant. It might be easier for you to accept that, at this point in time, Simon doesn't have the emotional strength to be a good marriage partner.