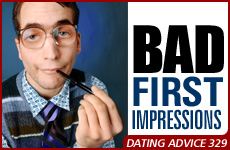 You only get one chance to make a good first impression.

I have a big problem with blind dates: I never like the guys I go out with. I am not attracted to them, not interested in spending time with them, and don't respect them.

These guys lack the level of sophistication and worldliness that I feel I need in a partner. They just don't seem to have their act together.

I meet a lot of men casually through work, and they don’t have any of these problems. (Though I wouldn’t consider dating them because we don’t share the same backgrounds.)

I’ve felt this way for a long time, and not wanting to sound pretentious, I never talked about it. Recently, I went to a party and one of the women said, "I’m never interested in the guys I date." Slowly but surely most of the women shared very similar feelings!

What’s going on here? How can we get married if almost none of the guys seem to spark our interest?

Your letter raises an issue that's begging to be addressed. You've echoed the sentiments of many young women we know. When they agree to go out on a blind date with someone who, on paper, has the qualities they are looking for in a husband, they're often turned off by how he appears in person.

Sadly, this phenomenon is common. Marriage-minded women hope to meet someone they can respect, admire and view as being on the same level (or better) than themselves. But when a blind date makes a poor first impression, they quickly decide that he's not marriage-material for them, and they just want to end the date and go home.

He may have the potential to make a great husband.

It doesn't seem to matter that the guy may have the potential to make a great husband. When he appears disorganized, unsure of himself, sloppy, unkempt, insecure, or pitiful, it doesn't matter what his other qualities are or what might shine through if they got to know each other.

The problem is twofold. One is that the woman isn't willing to give a second look, where she might be able to see the diamond beneath the "rough" exterior. On the other hand, the man hasn't done much to make himself look like husband material. And because of that, he probably won't get a second look.

We've observed that some young men who have spent much of their young adult years focusing on intellectual, creative and spiritual pursuits may not have invested energy into developing in other ways. As a result, they may not be as socially adept, or as sensitive to their appearance, as their peers. They may feel that the women they date should accept them the way they are, when in reality that's not what most women can do.

That's not because these women are superficial or shallow. It's because, "He needs someone to teach him how to dress/communicate, and that's not what I want to do in a relationship." Or, "How can I look up to someone who comes on a date with no wallet, no plans for what to do, or no clue for how to get there?" We often hear these comments from women who tell us, "I want to meet someone I can look up to, not someone whom I'm uncomfortable being with because I’m much more put together socially than he is."

Because this is a twofold problem, it will require a twofold solution for you and your friends to have more success with the men you date.

Try to resist the temptation to compare the “unpolished man” with other more socially adept men you know. It may be true that the men you know casually make a better first impression and it's easier to engage them in conversation. But your connection with these men, who don't share your values, goals or lifestyle expectations, is never going to be anything more than casual. Beneath the surface, neither of you is what the other wants in a partner.

In fact, that's what may make the flirtation so easy – it's "safe" because you have no expectations of anything more. It may make you feel attractive and feminine and good about yourself, but it's not the same as a real relationship.

For the man’s side, we have some advice as well. A man who doesn't pay much attention to grooming, or is content with the few items of clothing he's worn for years, can genuinely benefit from a "fashion advisor" (sister, cousin, or a married friend's wife) who can help prepare him for dates.

Similarly, a man who often feels unsure of himself on a date, isn't comfortable with the flow of conversation, isn't accustomed to planning what to do on a date or how to get there, would benefit from some coaching to enhance his dating skills. If a man wants the woman he's dating to see him as the “good man” he really is, then he will need to eliminate the barriers that are keeping her from wanting to get to know him better.

Diamond in the Rough

We have one more suggestion for you, and that is to try to give these men a bit more of a chance. Many of them have the inner qualities that you want, and they share your values, goals and lifestyle expectations. They also often have personalities you can relate to, once you get past the unpolished exterior. Remember that most of their apparent "flaws" are superficial – knowing how to dress, how to plan for dates, and how to feel comfortable with a woman. These are skills that can usually be learned relatively quickly.

The following story is 100% true (only the names have been changed):

Sheila had been dating for several years when one of her friends set her up with Arnie. His description matched a lot of the things she was looking for, and he sounded very pleasant on the telephone, so Sheila was looking forward to meeting him. But when she opened the door to greet him, she had to stop herself from staring open-mouthed. Arnie was dressed just like the character John Travolta played in the movie Saturday Night Fever. He had the same white vested suit, open-necked shirt, neck chain, and hairstyle of a 1970s disco king.

She forced herself to smile and went out with him.

Sheila’s first thought was to pretend that she was her own roommate, and tell Arnie that his date had suddenly contracted a stomach virus. But she resisted the urge, and even felt a little sorry for Arnie, who had obviously tried to impress her with his hopelessly over-the-top get-up. She forced herself to smile and went out with him, silently praying that she wouldn't cross paths with anyone she knew.

It turned out that Sheila had a nice time on the date! In spite of Arne's poor fashion sense, she wanted to see him again. She was able to overlook his poor fashion sense because he had an engaging personality and had made an effort to plan a pleasant date. They've now been happily married for 27 years and Arnie always looks tastefully groomed… thanks to Sheila who chooses his wardrobe.

Our advice: Have a little patience with a guy who sounds good on paper but isn't put-together enough to make a great first impression.

We hope these suggestions are helpful, and we wish you success in navigating the dating maze.

One Drink Too Many: My Journey of Breaking Free from Alcohol
The Scandalous History of the Aleppo Codex
Who was Two-Gun Cohen?
Why Really Everyone Believes in Free Will
Should Jews Support Ukraine?
The Jews of Cuba
Comments
MOST POPULAR IN Dating Advice
Our privacy policy