Dating Wisdom from “Are You My Mother?” 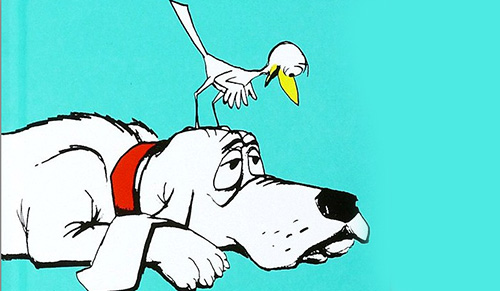 P.D. Eastman’s children’s book is really a tale about searching for your soul mate.

P.D. Eastman book, Are You My Mother? is really an instruction manual on how to navigate the Jewish dating world written in the guise of a children’s book.

The story line is simple: one morning, a mother bird feels her egg shaking. She realizes that her baby is about to hatch and hurriedly flies into the distance in order to ready some food. The baby bird, however, hatches before she returns and, after a painful descent to the ground, commences an epic search for her mother. After many adventures and failed attempts, the chick and her mother happily reunite.

Here’s the deeper story that Eastman was trying to present:

One sunny morning in heaven, a ridiculously perfect soul is split into two: a shy, sweet girl and an adventurous boy. These kids are immature and need to grow up. So the barely-bearded boy flies south to who-knows-where in order to gain experiences and emotionally prepare for a healthy life with his future spouse.

He is supposed to have returned and be waiting when the love of his life is ready for him. But, alas – this is not the case (if it were, there would be no story, would there?). When she opens her bright young eyes expecting a beautiful version of the world, she discovers to her dismay that the place where her soul mate should be waiting is shockingly vacant. She glances this way and that and sits patiently for a bit. After a while, she decides, “Forget this! I’m going to find my guy!” and promptly crashes to the ground as she trips over her own unsteady and immature legs.

The search for a husband (a.k.a. mother) has begun.

Our young chick never knew that such boring animals could exist.

In the book, the chick first approaches a Kitten. She doesn’t think that this is her mother, but she is young and filled with hope. “Are you my mother?” she timidly and excitedly asks. The kitten just stares at her in response. Dead. Silence.

Our young chick never knew that such boring animals could exist. They had absolutely no similar interests and although she entertains him for a bit with her antics, she says goodbye soon after and promptly moves on.

Nice Kitten, but not her mother at all.

Not to be deterred, the chick then questions a Hen, followed by a Cow. The Hen was actually pretty awesome and the two of them discovered a lot of commonalities, but after spending some time in each other’s company, they realize that they are not, in fact, related. She says a bittersweet farewell, knowing their paths will likely never cross again. She will miss the hen’s wit, but the loss is of small consequence in comparison with the joy of the expected reunion with her mother.

In retrospect, she realizes how silly it was to think that a Kitten or a Hen or a Cow could be her mother. And she is grateful that each of the aforementioned animals gave her the clarity that they are not a match. Something inside of her knows that she will find the Bird who will not only tolerate her qualities, but will fit with her because of them.

And though the search brings the chick into contact with more interesting and wonderful characters then she could have ever hoped to meet, she becomes sick and tired of asking the same question over and over and over again.

The search gets repetitive but the chick clings to hope.

This chick has looked into more eyes and asked the same questions and told the same stories about her childhood and the same jokes more times then she can count on her fingers (that is if chicks had fingers).

The search gets repetitive but the chick clings to hope.

Ever so slowly, doubt starts to creep in. She starts to think that perhaps the idea of a mother is just a dream and a product of a wonderful imagination. She starts to question whether there is anyone like her in all the world. Perhaps she should indeed morph into someone larger and wider and quieter.

In the book, the chick begins to panic, asking herself irrational questions and responding to them, “Did I have a mother? I did have a mother! I know I did. I will have to find her! I will! I will!”

Yes, you funny little thing, of course you have a mother.

There are periods that pass during which the chick is walking for ages and meets no one. Nothing. She feels like she will never find what she’s looking for.

In the human world, a person in this dating stage can feel abandoned, hopeless. You find that instead of your friends and shadchanim suggesting prospects for you, you must remind them on a consistent basis that you are alive. To remember that you are here. That you exist. That you are not just another chick looking for a mother in a world where chicks far outnumber mothers. That you are you! And that there is a guy out there who is looking for a chick who is too small and too tiny and too loud! And that any direction to help find him would come in extremely handy.

And then the chick considers sitting down. For a while, whenever she meets other animals, she doesn’t even dare to hope. It’s safer that way.

But when her next birthday passes, the panic sets in. Another year has come and gone and she still feels as if a part of her is vacant. And the chick begins running… Past a Car – no, not mom. And nor is that huge Boat in the distance.

Suddenly, that little bird sees the Plane. In her great anxiety, all she sees are the similarities between them. We can both fly! We can make this work! I know we can!

The chick shouts after the plane. She screams at the top of her lungs. She is alive again! She has opened up and been snapped out of her jaded emotional slumber.

But the plane does not stop. The plane continues onwards.

She sits back, disappointed. Lost and drained. And then she turns to one last woman who suggests a huge Crane – whom the chick promptly dubs “Snort” based on the awkward noises that he makes periodically.

She decides to give Snort a chance. Once she gets past the Snorting, she discovers that he is a handsome, insightful, mature machine. Although she realizes that the Crane is not her mother at all, she learns numerous things from him. And the time spent with him causes her to do some much necessary soul-searching and developing. In fact, he teaches her more about herself then any of the other animals and inanimate objects combined.

And he lifts her up and through her dejection shows her that she is capable, not only of surviving by herself, but that she can thrive as well. That she can love herself. He helps her realize that it is okay to be too small and too tiny and too loud. That she should not change in order to please anyone – because she is fine just the way she is.

And it may take her longer to find her mother. She comes to terms with that. She can survive alone for a bit and she will have a fantastic time doing it. She will learn as much as she can from as many animals as she can. She will utilize her alone time to transform the world and herself for the better. She will expect her mother to enter her life at any moment, but she will not become despondent if this does not happen.

And suddenly, Snort (which is now an affectionate nickname) delivers her back into her original nest – exactly as her mother arrives with a fantastic, fantastic diamond worm.

The Mother is apologetic for being late and explains that she was just gathering supplies so that she could be the best mother she could be. But she would know her chick anywhere. Her chick is small and she is tiny and she is loud and – to her mother – she was perfect.

Dr. Seuss once said, “We are all a little weird and life’s a little weird, and when we find someone whose weirdness is compatible with ours, we join up with them and fall in mutual weirdness and call it love.”

The book ends as the chick’s mother turns to her and softly says, “Do you know who I am?”

The chick proclaims with joy, “Yes, I know who you are. You are not a Kitten or a Hen or a Cow or a Car or a Boat or a Plane or a Snort. You are a bird and you are my mother.”

And they lived happily ever after…

5 Techniques for Meaningful Conversation in Dating

Dating Survival Guide
Near Death Experience Panel
The Western Wall: The Heart of the World
Ask the Right Question: Tisha B’Av
Comments
MOST POPULAR IN Dating
Our privacy policy
Aish.com Is Looking for Great Writers