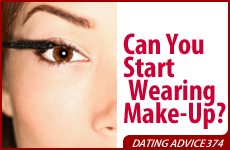 The man I'm dating wants me to wear make-up – and I hate make-up!

I’m a 26-year-old professional woman – attractive, lively and smart. I am a bit of a naturalist – whole foods, natural fibers, solar power. I despise the idea of wearing make-up and believe I look pretty without it.

A few months ago I met a great guy. We’ve gotten to know each other in a healthy way – sharing time at museums, concerts and picnics. Everything seemed to be going great until… we were speaking yesterday and all of a sudden he got very serious. He said that something’s been bothering him, and he needed to talk about it. He said that he’s used to women wearing make-up and he finds my “natural look” a bit flat. So he asked if I would indulge his preference and start wearing make-up when we’re together.

I hate make up! I could see myself marrying this guy, but I can’t imagine going through life with rouge on my face. How much do I change for someone?

We can understand what you may be thinking and feeling about this man’s request. You may feel that in some way he's trying to change, or even control you. You are content with your natural looks and have a hard time understanding why a man who's attracted to you would want you to add something to an appearance he already likes. You may feel that cosmetics are unnatural, artificial, and unnecessary for someone who is already comfortable with her appearance. These are all valid points.

One option is that you can follow your convictions and not agree to this request. You can be one of the many women who go through life quite happily without wearing make-up, and you won't be at a disadvantage because of this choice.

At the same time, since he is someone you care about, it is worthwhile to understand his perspective and decide if that might influence your decision. Many times, when we're in a relationship we value, we are willing to make changes that are important to our partner. We might change a behavior like driving too fast, a habit such as smoking or chewing gum.

We can enhance our appearance in order to please someone we care about.

We can decide to do something to enhance our appearance in order to please those close to us. People often style their hair, shave, wear cologne, put on make-up, or wear a flattering outfit because they want to be more attractive to the person they're dating. We might trade in our comfortable yet worn-out shoes or slacks for something new, or let down our up-do and let our hair frame our face – all because someone we care about has asked us to.

The fact is that most of us look more appealing when we have a becoming hairstyle, well-fitting and stylish clothes, trimmed beards for men, and make-up for women. Further, we appreciate when someone we're already attracted to does something small to make themselves look even better in our eyes.

There's another factor at play here that many women don't consider. In general, a man's attraction to a woman tends to have a strong visual component. A woman's features, body type, way of carrying herself, and overall appearance all strongly contribute to how attracted a man feels toward her. Against this backdrop, he may start to feel emotionally connected to her. When a woman enhances her appearance with a bit of make-up or a new hairstyle, he feels even more attracted. (We've observed that most women are "wired" differently. A woman who has started to feel an emotional connection with someone she's dating may only need to find one or two of his features appealing, such as his eyes or his smile, in order to feel attracted to him.)

We're not telling you to accede to this man’s request. However, it is worthwhile for you to talk to him about it and find out why he'd like you to wear make-up. To him, it may not be much different than you telling him, "I know that sometimes you go a few days without shaving, but I prefer it when you're clean-shaven."

If he tells you that he likes it when a woman wears make-up, or says he thinks you'll look very pretty when you're wearing it, you may want to think about trying it when the two of you go out, just because you'd like to make him happy. A little mascara, lipstick, and perhaps some blush may be enough to do the trick – most young women don't need more than that.

Think about why you are so strongly opposed to wearing make-up.

It would also help you to think about why you are so strongly opposed to wearing make-up. Could it be that when you think of make-up, you envision layers of clog-blocking foundation and heavy, extreme-looking eye treatments? Do you associate wearing make-up with being artificial? Are you uncomfortable with the idea of enhancing your looks in order to look more attractive? Do you feel that using make-up obscures who you really are? Understanding why you feel the way you do may help you decide what to do about his request.

It also might help to know that cosmetics aren't a phenomenon that was created by the beauty industry. While the majority of women in the Western world wear make-up today, we've been doing so since biblical times. Even during the period of harsh slavery in ancient Egypt, the Jewish women used copper mirrors to adorn themselves for their husbands when they returned home, exhausted from their slave labor, and thus ensured the continuity of the Jewish people. When the Jewish women later donated these mirrors to the construction of the Tabernacle, God considered them as sacred gifts.

As a final word, we’ll mention that sometimes, a man will have other motives for asking his date to wear make-up or dress in a different style. He may be controlling, and trying to mold her into his own image of what he wants her to be. If this man starts telling you what to do in your spare time or which friends you can see, the relationship may be developing in an unhealthy direction. In such a case, we'd urge you to look more carefully into his motives and expectations, and speak to a trusted mentor, before continuing further in this relationship.