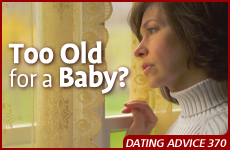 I want to become a father. Should I marry a 47-year-old woman?

I enjoy reading your articles and can use some insight. I am 38 years old and for the past five years dated a woman 9 years older. She has three teenage children. We met and I helped her get her life together.

From the beginning I wanted a family. Until recently, she was ambivalent about having a child with me, and changed her mind because she knows how important this is to me.

Now the relationship has ended. Although we had come to a point where she agreed to have another child, I had concerns about her age (47) which sounds too old to have a baby. And I'd like to have more than one!

The problem is that I'm miserable without her. We get along very well and connect on many different levels. I'm not sure if I've made a mistake by breaking up. Should I try to get back together and plan a future together? Or should I heal from the break-up and move on?

I’ve asked a number of people for advice, but I’m still not sure what to do. I've never been faced with such a life-altering dilemma. Your insights are greatly appreciated.

We agree that you're faced with a very hard decision. Most of us reach a crossroads at some point in our lives, where we have to decide whether to continue the road we've taken, or re-evaluate and head toward a different destination. Sometimes the choice is easy, with the benefits clearly outweighing the disadvantages. The choice becomes difficult when both paths have compelling arguments for and against.

Let's look at your dilemma. One of your life goals is to become a father and raise a family. The woman you care deeply about has already raised three children and is near the end of her childbearing years.

Her willingness to have a baby has actually complicated things for you: When the alternative was giving up your dream of fatherhood to have a life with a woman you care about, or breaking up and looking for someone who also wants to have children, it may have been easier to decide to end your relationship.

Now that she’s willing to have a child, you are confronted with a more stark situation and will probably want answers to the following:

And there are more questions to consider:

Before you consider getting back together, it is crucial that you answer these questions. Unless you resolve these issues that caused you to break up, or you can figure out how to come to terms with them, getting back together will probably be an exercise in frustration. Even if you think that the two of you can start dating again and work out these issues together, you probably won't be able to do so. That's because she has already told you the compromise/sacrifice she's willing to make, and you decided that didn't fully resolve the problem. At this point, any changes have to come from you.

Furthermore, it would be a mistake to think that if you resume your relationship, somehow you'll develop the clarity you need to come to a decision. Instead, what will probably happen is that the two of you will remain in limbo until the relationship deteriorates and one of you decides to end it.

Let's say that you are able to accept the possibility that you may not father a child, or a few children, if the two of you marry. There are a few other points to take into account as you decide whether to get back together and move toward marriage. You've told us that you connect on many different levels. Does that also include having similar hopes for the future, as well as a compatible value system? Compatible values and goals are critical foundations for marriage, and differences in your expectations and worldviews can adversely affect the stability of your relationship. Since you were together for five years, you can hopefully answer this question easily.

Your emotional support may have formed the bond between you.

Another factor to think about before deciding whether to try to resume the relationship is the way things evolved over the five years you were dating. You say that you helped this woman get through a very difficult time and put her life back on track. It sounds like your emotional support and encouragement was a significant factor in her success at regaining her equilibrium, and may have been a basis for the emotional bond that developed between you.

It is important for you to evaluate if she is now a capable, stable, confident, giving, supportive and empathic person. Or did your relationship develop a less-balanced dynamic in which you took on a recurring role of "rescuer"? Some couples are comfortable with these roles, but after a time the imbalance may become a source of resentment and friction.

We prefer relationships in which each partner is a source of strength, compassion and support for the other. Such relationships have the best chance of succeeding over the long term. Think about the balance in your relationship as you decide about resuming it.

Your letter didn't discuss your relationship with this woman's children and how they fit into the picture. Is that because you get along well with them and feel positive about joining their family permanently? Do you expect that you and their mom can adequately address any issues relating to blending a family and becoming a stepdad? When you were together, did you talk about what blending a family would entail?

Before you decide to move forward, we recommend that you discuss your respective ideas and concerns about family-blending. Seek advice about anything you don't feel you can adequately resolve together.

The fact that you're younger than this woman doesn't concern us, as long as you are comfortable with the difference and have resolved how you feel about its possible affects on her ability to have and raise a child. Our perspective is that after the late-teens and early 20s (when men and women are still developing cognitively and maturing socially), a difference of 5-10 years generally doesn't affect how well they can relate to each other and succeed as a couple.

The larger the age gap, the more you’ll have to deal with a variety of issues.

We don't think it matters which partner is older and which is younger, as long as both of them are okay with it. However, the larger the age gap, the more the couple will also have to consider and come to terms with inter-related issues such as fertility, lifestyle expectations, health management, and economic planning.

Summing it all up, we suggest that before you make any decision about whether or not to get back together, you answer the questions we listed and decide if you can be happy marrying this woman even though it may mean not having children together. It's important that you do not later regret the path you choose to take.

If you're inclined to discuss getting back together, first be certain that you share values, goals and a vision for the future. Be honest with yourself about how her children and your potential role of stepdad fit into the picture.

If you need to talk things through more, find one, and only one trusted friend to be your sounding board and source of emotional support. This friend’s role should be to help you gain clarity, but that is where it should end. This is a decision you have to work through yourself. And please don't ask more than one friend for advice, because it will only confuse you and not move you closer to resolving this dilemma.