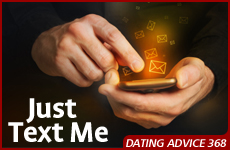 Our entire relationship consists of text messages. Is this normal?

I live in New York and have been tele-dating a guy from the Midwest. We met once for three days. He's very much into texts and does not call that often. He told me he would be ready to discuss “moving forward” for my birthday this past July, but now he says he’s not ready to talk.

He still texts me a few times a week, and if I let more than a day go by without replying, he makes sure to send me another message asking if everything is okay.

What's going on? What should I do?

At first glance, your letter describes a dilemma that many others have struggled with. You see possibilities with the person you're dating and would like to move things forward, but he is unsure. Since you know that people become invested in a relationship at different paces, you let him take the time he needs to get clarity. That time has long passed, and now, you're tired of being in limbo. You want to know what you can do to get this man to say something (anything!) about where he sees this relationship going.

Perhaps the problem is that he isn't ready for serious dating. Ideally, someone who isn't ready for marriage shouldn't get involved with those who are dating for marriage – and they should make this lack of intention clear from the beginning. And certainly, if one person is eager to move forward, the other shouldn't give false hope by saying that he's ready when he isn't, or by setting a deadline he’s not determined to meet.

We have seen people succeed at “making themselves ready” for marriage, but not by giving themselves an arbitrary deadline. They’ve done it by taking a break from dating, figuring out what they need to accomplish to be ready for marriage, making a plan for how to do it, and then getting it done.

Texting is a poor substitute for phone calls, Skype, and even email.

The other major reason why people get stuck is that they aren't sure how they feel about the person they’re dating. Sometimes, they're grappling with an issue they need to resolve, such as whether they can be okay with a dating partner's personality trait, or with something about her background or health. Or they may be worried how she'll react to something they haven't yet told her. Or they may worry whether a major difference in goals, values or lifestyle can be reconciled.

Another possibility is that one person isn't where he needs to be at this point in terms of attraction and/or emotional connection. This is likely what's happening with the man you're dating. Because he uses texting as the primary means of communication, he's barely gotten to know you, and his expectations about where he should "be" are premature. In other words, the texting has actually kept your relationship from developing.

Texting is intended as a way of short, spontaneous or emergent messaging. It's ideal for confirming appointments, quick updates ("on my way" or "running late"), or a brief "thinking of you," "good morning," or other one-line messages. It's not a way to carry on a conversation – it's not an alternative to an actual date, and it's a very poor substitute for phone calls, Skype, and even email.

People who use texting as their preferred form of communication lose out on the opportunity to discuss a subject in depth, the way we do in a face-to-face or phone conversation. There are no long talks or opportunities to express thoughts and feelings that enable you to get a sense of who each other really are. Instead, your communication is by nature brief and superficial – encouraging people to replace "depth and subtlety in their thinking with quick mental facts that only skim the surface." (Dr. Gary Small, Psychology Today). Think of like a situation comedy – observations and cute one-liners, but not much more.

The nuance of spoken words, non-verbal cues, and chemistry are all missing from a text exchange.

Communication doesn't only consist of the words we use. During a face-to-face meeting, we observe another person's facial expressions, gestures and body language. We hear the tone and nuance of the spoken words. We can see if the other person is paying attention or is distracted. We can learn to read and respond to each other's non-verbal cues. We pick up on a person’s nervous habits, as well as their endearing ones. These are the experiences that enable us to feel a sense of chemistry. All of this is missing during a text exchange.

This man may think that the few dates you had over a three-day period was enough to build upon, and that things can continue with the help of cyberspace. He's mistaken. Those first few face-to-face meetings were only helpful to decide if you’re comfortable enough with each other's appearance and manner of relating.

Texting can be abused as a way to pass the time without really becoming emotionally invested or involved. Author Emma Gray calls texting “the pygmy of communication methods. It's a Post-it note, a P.S. It's minimum investment, minimum effort. It's often cowardly – a way to avoid face-to-face contact.'"

By texting, this man is stringing you along. He may even have a number of these “relationships” going at once – biding his time, without making any commitment, just waiting to see what pans out. It’s also possible he has no intention of any of these relationships becoming more than they are now.

You need to pull this relationship out of its rut. Tell him that so far you’ve enjoyed the texting, but now you need more face-time.

The first step is that he needs to clarify to himself whether he's ready for a serious relationship that may lead to marriage.

After that is resolved, the next step is to decide if the two of you have potential.

We're not surprised that this man can't make a decision about what he wants to do. Texting has kept you from learning about each other on a deeper level, developing the beginning of an emotional connection, and enabling any physical attraction to grow. No matter how many months you've been texting, you are still at a very early stage in the courtship. It's too early for it to be a statement that he's getting "serious."

What you need is another long trip to see each other – an opportunity to learn more about each other and how you relate. Think of it as the 4th, 5th and 6th dates.

Limit texts to a quick "hi" in the middle of the day.

We recommend that you arrange to see each other within the next few weeks for face-to-face dates. You need to interact in different venues – doing varied activities, and talking about topics in-depth. This will help you see different sides of each other and develop a shared history that enables you to form an emotional bond. During the stretches of time you can't be together, telephone and Skype can help you continue the momentum you started to develop.

In between, talk on the phone or Skype a few times a week. If he feels uncomfortable transitioning away from text, start with 15-minute calls, during which you can each talk about your day, something you saw in the news, what you're looking forward to, or an interesting experience. From there, move on to longer, one-hour "phone dates."

As for texts, limit those to a quick "hi" in the middle of the day. For while texting can be a good way to convey short messages, it's not a good way to build a relationship.

Dating Advice #270 - Popping the Question
Why Are The Prayers Of Yom Kipur So Repetetive?
Ha'azinu 5783: A Time for Unity!
Twisted Thinking
Comments