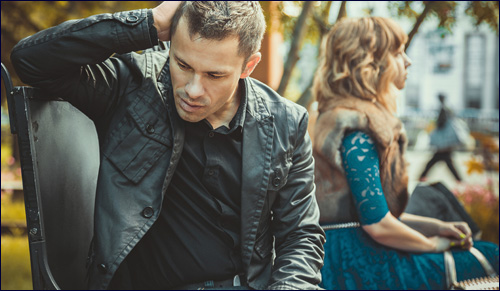 My friend is stuck in an unhealthy relationship. Should I risk our friendship and say something?

My friend Brian is in an unhealthy relationship. His girlfriend is controlling and possessive; she won't allow him to talk to me anymore because she says I "flirt" with him (Brian and I have been friends for the last 10 years and are just friends), and she is constantly getting angry at him. She tells him he cannot hang out with his friends anymore on the weekends and when she and Brian are amongst a group of people, she does not allow other people to talk to him.

Among other things, many of Brian's friends have noticed this behavior and have voiced concern to him. He admits he is in an unhealthy relationship, yet he doesn't believe he will be able to find anyone else who will love him. I heard recently that they are planning on getting engaged. On one hand, I care deeply about my friend, but on the other hand I realize that it is his choice what to do with his life. Should I just be happy for them? At a certain point is this none of my business?

You’ve asked an excellent question – “Should I speak up when I think my friend is in an unsafe or unhealthy relationship, and if so, what do I say?" You've given a good reason why you might be reluctant to share your concerns with him - he's an independent adult who can make his own choices in life. At the same time, it sounds like you think that Brian's staying in this relationship for the wrong reasons and speaking to him may give him the incentive to realize that's the case and end it.

Before we go any further, we think it's an important point that you're not the only one of Brian's friends who's worried about him. Sometimes one person's biases can make her see a situation differently than other people do. For example, your concerns about Brian might be colored by what you feel is his girlfriend's unfair reaction to your friendship. If she feels threatened by an ordinary friendship and sees your normal conversation as flirting, she may indeed be possessive and unreasonably jealous. However, if you and Brian are close platonic friends, it isn't unreasonable for her to feel that he should be confiding in her, his serious girlfriend, instead of you. She may not be controlling and possessive, even though you see it that way.

Since many of Brian's other friends share your concerns based on their own experiences with his girlfriend, it's more likely there is a real problem.

Often, a dater in an unhealthy relationship needs a little help to be able to see or acknowledge it.

There are many reasons why a person stays in a relationship that’s unhealthy. He may be so infatuated or blinded by affection that he can’t see that his dating partner is controlling, verbally abusive, selfish, irresponsible, or has other negative character traits. He may be aware of these traits or see problematic behaviors and hope that in time, they'll bother him less, or hope that in a supportive, loving marriage, his partner will be calmer and willing to change for the better. He may be ashamed to acknowledge that his partner is treating him badly. Or he may acknowledge the problem and convince himself that he has to get accustomed to living with a difficult or unstable partner because he believes he doesn't deserve better, or that an emotionally healthy person would not want to marry him.

Often, a dater in an unhealthy relationship needs a little help to be able to see or acknowledge it. We've heard people remark, "Everyone saw the problem except me. I wish someone would have said something that could have helped me see it before I decided to get married.” Others have told us, “I couldn’t admit how bad the situation was until my friend spoke to me about it. She gave me the courage to look at it carefully and decide to end the relationship.”

You've told us that Brian realizes that the woman he's dating has unhealthy issues with anger management and control. However, he may not realize that she is setting the stage for a potentially abusive relationship by making demands that will cut him off from his friends and support system. He also may not understand that it's his low self-esteem that has him thinking, "I have to stay with her because I can't get anyone better....I don't deserve anyone better." These are good reasons to bring your concerns to Brian's attention instead of standing by and letting him continue an unhealthy and unsafe situation.

There is strength in numbers; it may be a good idea to approach Brian as a group of concerned friends. First, tell him that you've come to speak to him because you love him and are concerned for his safety and well-being. Express your concerns that he is in an unhealthy relationship and give specific examples of troubling behaviors and incidents you've observed. Explain why you think they are not healthy, and that he is a worthy person who can and should be in a healthy relationship. Ask him to think about what you've said, and explore how he feels about continuing in the relationship.

Encourage him to speak to a qualified therapist to help him decide what to do, and give him the names and contact information of some capable professionals. Finally, let him know that he has your support no matter what he decides - you're there to listen, give encouragement, and help him through rough patches, even (or especially) if he decides to marry his girlfriend.

Your efforts may not turn out as you hope. Brian may resent you for interfering with his personal life. Even if he appreciates your concern and sensitivity, he may decide to continue dating, and even get engaged, and he may be embarrassed when he sees any of you. Hopefully, Brian will decide to talk to a therapist, and/or to break up with the woman he's dating. He may thank you for giving him the courage to stand up for himself, but he also might feel awkward about what has happened.

You'll have to weigh what you see as a danger to your friend against the risk that your decision might damage your friendship. It's up to you to decide whether speaking up is worth the risk, but it sounds likely that it is.

We wish you the best of luck,
Sherry and Rosie