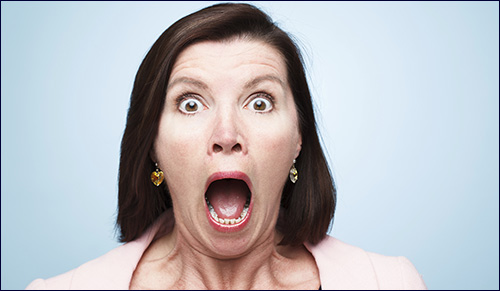 Why won’t my son introduce me to his girlfriend? I’m sure she’ll love me unless I hate her first.

My Meshuggah-ness is in high gear today as my son has refused to introduce me to his girlfriend. Do I know why? These girls loves me. Now, while my professional, clinical self is of course, non-judgmental (unless serial killing is involved), when it comes to my own? I may be guilty of expressing an opinion or two … offering a teeny bit of unasked for advice … or saying (God don’t punish me), “I HATE her … but it’s just a feeling.”

I may be guilty of offering a teeny weeny bit of unsolicited advice.

Here is some of my caring remarks and advice on dating. You be the judge.

ME: (TO MY SON) How nice to finally meet your friends, Tiffany, Lotus, Bardot, and Bastion. Pssst … do any of them have a last name that ends in “Bloom” or “insky?”

ME: (TO MY SON) Honey, you’re too picky. I sent you 10 photos of lovely Jewish young women. What do I get from you? You don’t like zaftig, girls under 5’2”, curls, and faces that aren’t symmetrical, among other things. Listen, your father loved my asymmetrical face … he thought it was “exotic.” And we were married for over 30 years. Let me tell you, in a few years, it wouldn’t make a difference. We all end up looking alike anyway. So go for the “interior” – the one with the big arms is a Yale graduate BTW.

ME: (TO MY SON) I watched “Marty” again last night … and thought of you. Watch it. I Netflixed you. Anyway … that last girl you introduced me to? Not for you. Her favorite film is “Fatal Attraction” and she isn’t even married yet. We need to talk about this in detail.

ME: (TO MY COUSIN’S DAUGHTER) Darling, I was up last night thinking of a list of men you shouldn’t look for. Then I realized that such negativity isn’t helpful, and you’ll ignore it anyway. So … instead, I made of list of professionals you should look for:

Our family needs: a lawyer. Since Cousin Amy’s divorce, we lost our lawyer, although he had severe halitosis anyway. WARNING: Stay away from divorce lawyers. We could also use a pharmacist and an interesting, creative accountant if you can find one. A message therapist who owns branches is also good as is an executive at Neiman Marcus. Personally I would appreciate you connecting with anyone on good terms with Steven Spielberg.

ME: (TO COUSIN WITH DAUGHTER) I read on Facebook that your daughter got a timeshare in The Hamptons. Beware! I did that when I was 23 and still single. Not only did I lose the Long Island Expressway, the place (they have names) was the Leopold and Loeb house. This should’ve been a red flag. We were seven girls one of whom shattered glass with her bare hands when she was nervous. Tell her to watch for people who shatter things as it’s a sign of an anger management problem.

ME: (TO A BEST FRIEND) Did you see “The Million Dollar Matchmaker” last night? I’m ticked. That host said men don’t like women with curls. This from someone who’s not even married. OK, I heard she’s engaged. She’s 53 and waiting to plan a wedding? At 53 you don’t plan, you run to a rabbi in Vegas. She could use her eggs for hors d’oevres already. Meanwhile, those rich bachelors. Oy, what people will do to be on television. Listen, a millionaire who doesn’t talk to himself needs a matchmaker like an elephant needs toe shoes.

ME: (TO A YOUNG FRIEND HOOKED ON DATING SITES) Enough with the moaning. READ BETWEEN THE LINES MAMALA. If he writes he’s a freelance consultant, it means he hasn’t had a paycheck since the Clinton Administration. If he describes himself as a complex with a subtle dark streak, he’s on Prozac. If he’s “Mature” chances are he’s on life support. If he says he’s in transportation, trust me, he squirts people’s windshields on the highway. An “actor-waiter” hasn’t had a gig since he played an extra on “Rusty the Boy Robot.” Also, stay away from men who wear white socks and patent leather shoes. Trust me, they think it’s a riot to stick straws up their nose. Finally, take it from my friend Sheila … she answered a personal from a guy who was looking for “a healthy Jewish female with a big heart.” They met … at Mt. Sinai. He was on the waiting list for a transplant. Seriously. Really. OK. I exaggerate. But … she met a man who said he has a fully equipped place on the slopes. It turned out to be he rented an igloo with two poles and a hot plate. Ask Sheila. HASHTAG: #WORSTONLINEDATINGLIARS. You can also check Instagram. I don’t know how.

A Chanukah Miracle...in February
It Takes A Lot Of Faith To Be An Atheist
How Instagram Brought Back This Nostalgic Soup
What Makes Eli Run?
Comments
MOST POPULAR IN Jewlarious
Our privacy policy