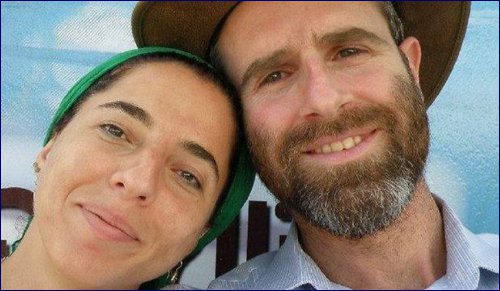 Murdered by an Arab terrorist in front of three of her children, her family says goodbye to a special soul.

This past Monday night was the first time that I heard about a very special person named Dafna Meir. Tragically, it was due to her murder by an Arab construction worker employed at a nearby site in the community of Otniel, in the southern Hebron Hills.

An investigation revealed that Dafna had opened her front door to the terrorist while three of her six children were home with her. The terrorist stabbed Dafna and a struggle ensued in which Dafna attempted to close the door. Renana, Dafna’s 17-year old daughter described the horrifying event, “I saw the terrorist stab my mother and she struggled with all her might so he would not come into the house and hurt us. At one point the knife got stuck and the terrorist could not get it out. Our eyes met. He looked at me and I looked at him. He kept trying to pull out the knife and it was clear to me he wanted to come and hurt me too.” 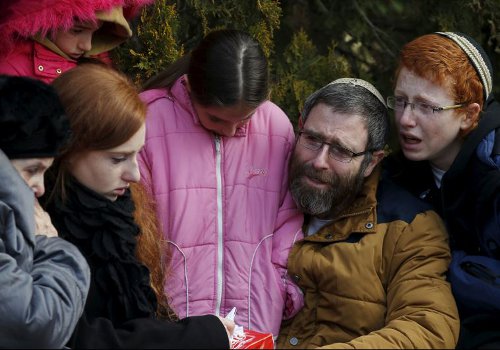 Renana was screaming at the terrorist, and when he failed to retrieve his bloody knife, he ran away. After a two-day manhunt, police arrested a 16-year-old Morad Bader Abdullah Adais.

On the morning of the funeral I joined one of the vigils on Highway 60 waiting for Dafna Meir’s funeral convoy to pass by.

While the vigil was being held, many of the army personnel suddenly jumped into their vehicles and raced off with sirens blasting. A person near me asked a soldier what happened and was told that there had been a terrorist attack in Tekoa, a 20-minute drive from where we stood. (Please pray for Michal bat Esther, a young pregnant woman who was stabbed.)

Scores of vehicles with Israeli flags hanging from them started passing by, along with an ambulance which held 38-year-old Dafna’s body.

At the funeral, Atarah, the adoptive mother of Dafna, told the crowd that Dafna was up for adoption at a young age because her biological parents were not able to care for her. Despite the hardships, “She managed to build herself up, build a home and turn herself into a kind and giving woman.”

“No matter how many children we have, we will also foster children in addition to our own.”

Atarah spoke about Dafna’s decision to enlist in the IDF as well as Dafna’s decision to marry Natan. “Dafna told us that when Natan had proposed she said she only had one condition, ‘No matter how many children we have, we will also foster children in addition to our own.’ And that is indeed what happened. They accepted Yaniv and Yair when they were three and one and a half. It wasn’t simple to find an adoptive family that would accept two brothers together. They invested so much in both of those children and in their own children.”

An acquaintance of mine told me that both her son and Yaniv had been at a nursery school for children with special needs. On several occasions she had gotten a ride with Dafna and was impressed with Dafna’s friendliness and helpfulness. Yaniv and Yair had been born to a mentally retarded mother, and it was only after Yair’s birth that social services got wind of the fact that the mother was incapable of properly raising her children.

Dafna’s husband Natan was the last to eulogize her at her funeral. “We met as soldiers on the border with Lebanon,” he said with tears in his eyes. “It took us a moment to fall in love…I said to you then, ‘Welcome.’ I say to you now, ‘Farewell.’ We are thankful for every moment we had with you. You left me six treasures. I will guard over them for you.”

With eyes lifted to the heavens he stated, “Dear Father. I have no second thoughts about you at all. Give us strength, be present in our home and let us feel your warm embrace – your love.”

“My Dafna is one in a million,” Natan continued. “One in a million, who grew up in a troubled home and managed to rebuild herself and give kindness back to the world.”

Dafna had combined conventional medicine in her work as a nurse in the neurology department at Soroka Hospital in Be’er Sheva, and work as a natural therapist who specialized in the field of fertility. Many Jewish souls came down to this world due to Dafna’s loving guidance.

Dafna was a shining star whose contributions to the Jewish people, as well as to people from other religions, continue to light up the world.