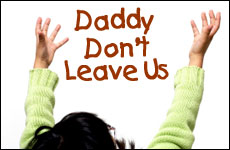 When was the last time we begged our Father to bring us back home?

Few scenes are more painful than watching a child being wrenched away from his parent. It becomes even more unbearable when you are an accomplice to the act.

As a community social worker I had my share of difficult cases. All the ugly parts of life and human nature, the parts we often try to wish away, stared me in the face day after day. But the Cohen* case was particularly heartbreaking.

David and Naomi Cohen started their marriage with the cards stacked against them. Naomi's first marriage had been particularly difficult, and her two teenage sons turned to crime for the money and the thrills they couldn't get elsewhere. David had endured a difficult childhood and his psyche was bruised. But they were both determined to build a better life for themselves.

For a while their dreams seemed to be coming true. Their marriage was happy, they had five children whom they adored, and the house more or less functioned. Then Naomi's oldest son was jailed. Financial difficulties made every purchase, every meal, a pressure. The kids were getting older, and needed more from their parents – emotional support that they were ill-equipped to provide.

Naomi had never been emotionally stable, and now her tenuous grip on reality began slipping. She became more and more unpredictable, prone to outbursts of rage, and often disappearing for days at a time, with no thought of her children's well-being. David tried to be understanding and supportive, but as she deteriorated, he found himself unable to remain married to the woman she had become. He divorced Naomi and focused on raising his children alone.

"Take them. I can't raise them on my own"

I met David shortly after Naomi had left the house forever. I asked him about the children.

"Take them," he implored. "I tried, I really did, but I can't raise them on my own. I need to work, and I can't be home when they get home. I rarely have time to cook or do laundry. Put them into foster homes where they'll have a better life."

In every agency I worked, we firmly believed that in the vast majority of cases there is no better place for a child to be raised than in his own home with one or both of his parents. No stranger, no matter how devoted, can match the love of a parent. Granted, there are always extenuating circumstances and sometimes a child has to be rescued from the people meant to love him, but if a parent is simply overwhelmed, better to give him support than to take away his children.

With this in mind, I got to work trying to alleviate the pressures on David. I arranged for his children to go to after school programs, where they would have a hot lunch, help with homework, and a shower. I ensured that his learning-disabled daughter got tutoring. I asked the local charity organization to help him with badly-needed foodstuffs.

For a few weeks, things seemed to be going smoothly. Then the neighbors and teachers started calling.

"I just saw the three year old Cohen boy in the street again. This time he was almost hit by a bus."

"Chana Cohen comes to school dirty and unkempt. It's been a while since her clothing was laundered and the other girls are complaining about the smell."

I invited David for a meeting. When I asked him how things were going, he sighed heavily. "Children need a mother" he told me sadly. "I appreciate your help, but it's not enough. There's the early morning, the nights, the weekends, I can't seem to stay on top of them all the time. Five kids under ten -- it's a lot. I really mean it when I say I want you to take them. It will be best for them."

We spoke for a while and came up with a painful compromise. I would try to get approval for a foster care arrangement for his youngest two children -- three and four year old boys. He would then devote his time and energy to the older three children. With fewer children, and less work, hopefully he would succeed. It took a surprisingly short amount of time to get foster care approved. I reluctantly called Michelle, the social worker at the foster care agency. I told her about the Cohen boys and detailed the type of family they'd need.

Michelle called back two weeks later, excited and enthusiastic. She'd found the perfect family. Meir and Anat Porter had everything David and Naomi didn't -- a secure marriage, thriving children, excellent income, a beautiful home. Their four children were getting older and they wanted to share their good fortune with those less blessed. The couple was well-educated and warm, the Cohen boys would have every advantage in life.

It did sound good, but it was with a heavy heart that I picked up the phone to call David. He was happy to hear about the family, but seemed startled when I told him that I'd arranged for the boys to meet the foster family in a neutral setting the following week. "So soon?" he asked.

"If this is what's best for them, why push it off?" I replied. "Unless you're having second thoughts?" A pause, and then David assured me that he wasn't.

The initial meeting went well, and we arranged to have the boys move in with the Porters ten days later. The morning of their move I went to the Cohens to help them pack up. There was pitifully little to pack. Their jumble of clothing didn't even fill a small shopping bag. There were no pajamas, no toothbrushes, no cherished toys or stuffed animals. The remains of their breakfast lay on the table -- a bottle of soda and a bar of chocolate. I felt fortified in the knowledge that this move would give the boys a chance to flourish.

We met Michelle and then drove to the Porter's home in a small town near our city. The boys were getting more terrified and suspicious by the moment.

"What did you tell them?" I asked David.

My heart sank. Michelle gently explained to the boys what was about to happen. Their eyes went wide, but they said nothing.

At the Porter home, David took in the gleaming marble floors, the pet parakeets, the grand piano, the well-tended garden. He smiled as he watched Anat Porter kneel down and talk to the boys, listened as she told them how happy she and her family were that they were coming to live them. But the boys didn't smile. They bolted to their father. David held them for a while, and then stood up.

"I'd better be going," he said awkwardly. He tried to disengage the boys from his knees, but they just clung tighter. He walked to the door while they held onto him for dear life. Then he walked through the garden and stopped at that garden gate.

David gave them one last wave, blew one more kiss, and then turned and walked away. He didn't turn around.

The boys began to wail and continued holding on. Michelle and I stepped forward to help him. He removed the boys from his legs, giving one boy to each of us. Then he slipped out of the high gate. Anat locked the gate door. The boys were hysterical, screaming, clawing at the bars, trying to scale the gate.

"Daddy, Daddy!" they screamed. "Don't leave us!" Michelle, Anat and I all had tears running down our cheeks. David gave them one last wave, blew one more kiss, and then turned and walked away. He didn't turn around. He got into his car. He drove away. And the boys continued to wail.

I think of these boys now, as we enter the three week period of mourning for the Temple, the Beit Hamikdash and all it symbolized. There was a time when we dwelled beside our Father's Palace. A time we could see His face whenever we so desired. A time when we had a direct pipeline connecting us to our Creator, the pipeline through which poured both physical blessing and spiritual connection.

But we didn't appreciate all we had. We spurned God Who was so close. We sinned in the shadows of the building in which His presence resided. God sent hundreds of prophets to warn us, to plead with us to change our ways. But we turned a deaf ear to their words. Finally, there was only one way left to redeem us. God destroyed the Beit Hamikdash and sent us into exile. Our Father had to watch us being torn away from all we loved.

We weren't going to a warm foster home; we were going into a harsh exile where we would be mocked and abused, where we'd be tortured and gassed. As the terrible reality finally set in, and we realized too late all we would lose, we turned back and cried for our Father, begged Him to bring us back. But He had to turn His back on us, knowing that only in exile could we rectify our errors.

The last time I spoke to Michelle, just before I left my job, she told me that the Cohen boys were happy and settled. Their calls to their siblings were more infrequent and they rarely visited their father. Their definition of family was shifting. It wouldn't take long before the Porter's house would be what they called home.

Nearly 2,000 years have passed since the fateful day when our Father had to send us away. How often do we cry out to Him? When was the last time we begged Him to bring us back? What is it that we call home?

* Names and details have all been changed 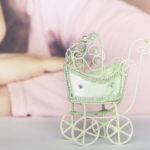 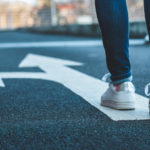 Following Our Own Path3 min read

Does God Care who Wins a Sporting Event?1 min read