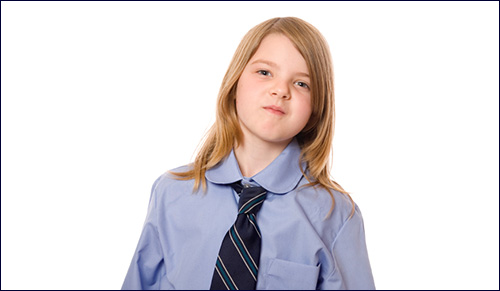 What should I do about my little sister who likes to wear men’s clothing?

My little sister likes to wear men's clothing and my parents are not happy about this. She's only eight, and I feel like it's just one way of expressing herself since she is very creative, but my parents worry that she'll be gay or a cross-dresser for life. In my opinion, forcing her out of these clothes will not change who she is, so they may as well let her be herself instead of always telling her “No.”

They tell her, "Women can't wear men's clothing." I don't know what to do. Every time she so much as wears a men's hat or tie she is immediately told to take it off. I'm afraid that she's getting very depressed. I know she feels judged. I'm frightened that one day she could end up so damaged that she can try to take her own life – all because of clothing! Is there anything I could do? My parents are open-minded about most things, but not about this. All I could think of doing is make sure that when I get older I have an open home for her because something tells me she will need it. But that does not help anything until then, and who knows what will happen before then or how long it will be until I live on my own.

You can express your concern to your parents, respectfully.

I understand that you think your parents are damaging your sister. It could be that their forcing her to remove clothing items of her choosing is causing her distress. It could be that she feels very rejected and squashed by their telling her to remove the hats and ties and other items of clothing. Because you think that is the case, then you tell your sister how much you love her, and give her lots of love and acceptance.

You can also express your concern to your parents, respectfully. Your opening sentences would go something like this: “Mom and Dad, what do you think? I’m afraid your telling Sarah to take off the clothes she chose will damage her psychologically. Maybe – I don’t mean to disrespect you – maybe we should all just let her be?”

On the other hand, it could be that your parents’ telling your sister to remove the men’s clothing is not damaging her. It could be that she doesn’t like being told what to do, but that imposing rules and limitations helps her to live a healthy life with boundaries.

Let’s say a child wants to major in English, and let’s say his parents tell him he has to major in economics instead. Is it definitely true that their expressing their opinion, even strongly, will damage the child? Not necessarily. It could be that the child stops to consider: “What job opportunities would I have with an English degree? Which job opportunities might I have with a degree in Economics? How much do I love English? How much do I hate Economics? Do I hate Economics?” Parents’ suggestions might make a child think, and thinking is a very good thing.

So you can be a loving support for your sister, and you can express your opinion to your parents about the manner in which they tell her to remove her men’s items. And their telling her how to dress could be damaging her, or it could be that she will be unaffected by their expressing their opinion.

An important point for you to realize is that you are only the sister, not the parent. As a non-parent, you don’t really have any clout over your parents’ behavior. You can express your concern to your parents, but they may not agree that their insistence is hurting her. And they may not change. Just keep that in mind before you bang your head against a brick wall. Changing ourselves is doable, with enough gumption and awareness and strength. Changing others – not so much.

In terms of children wearing the clothing of the opposite gender, I think every child deserves to express himself or herself however he or she wishes, but with limits and boundaries. It’s always a really interesting balancing act between doing what we as individuals want to do and doing what our friends/neighbors/society deems acceptable. A kid might want to wear chartreuse pants with a hot pink shirt and a yellow hat and puce shoes. Parents might tell the child not to wear that, because it might make that kid not accepted amongst his or her peers. A child might decide he doesn’t care to be accepted by his peers, or he might decide he does want to be a part of the group. He might be grateful for his parents’ help, or he might balk at their impinging on his individuality. It all depends on the child, on the parents, on the way they express their opinion, and on the peer group/culture the child is in.

For example, in India, it might be quite common to wear chartreuse pants and hot pink shirts and yellow hats and puce shoes. In California it might be quite accepted to be “colorful” like that. In Connecticut, it might be radically rejected. It all depends on the child, on the parents, on the way they express their opinion to the child, and on the culture they live in.

I often have this quandary, myself, with regard to style. On the one hand, I certainly would never want to be a slave to the “in” fashions. Why should I run out and get items of clothing just because some sartorially-minded people decided those items are “in” now? On the other hand, I don’t want to look completely outdated, because that puts me outside the social norms in a way that might make me feel lonely. So it’s a real balancing act between my desire to maintain my individuality and my desire to conform to my society’s parameters in order to be a part of the group.

I would also like to mention that women wearing men’s clothing and men wearing women’s clothing is an issue addressed by Jewish law, so consulting with a competent rabbinical authority is in order with regard to questions of this nature, as every situation is different.

Not a bad outcome.

Q & A for Teens: Dating Jewish?

Can God Love Me?

Q&A for Teens: My Disparaging Mother
Jews and the Chocolate Trade
Cats: 8 Jewish Facts
Every Night, Forgive Yourself and Others
Comments
MOST POPULAR IN Current Issues
Our privacy policy
Aish.com Is Looking for Great Writers